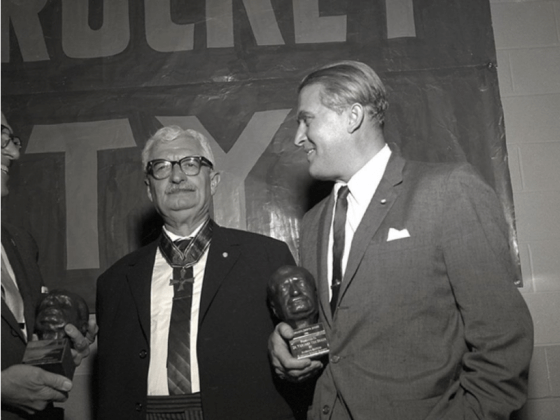 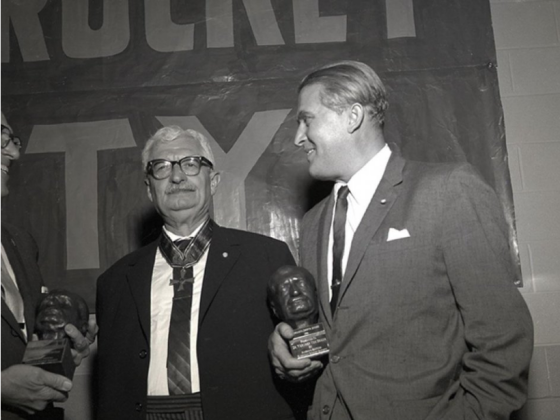 Many decades ago, the mentor of Wernher Von Braun, Hermann Oberth (both seen in the picture above), the founding father of rocketry and astronautics, also known as the ‘father of Spaceflight’ stated his belief that “flying saucers are real” and that “they are space ships from another solar system.” He went on to say that “I think that they possibly are manned by intelligent observers who are members of a race that may have been investigating our Earth for centuries.” He wrote these words in “Flying Saucers Come From A Distant World”, The American  Weekly, Oct 24, 1954. At the time, academics like Oberth were well aware of the reality of UFO phenomenon. Carl Jung, for example, accused the air force of covering up the UFO phenomenon at the time.

Braun seemed to be concerned about a “false flag” alien invasion. . Nikola Tesla was also highly interested in the subject.

According to a paper published in the Journal History and Technology titled Extraterrestrial encounters: UFOs, science and the quest for transcendence, 1947–1972,

At the Internationaler UFO/IFO-Kongress, hosted in Wiesbaden and organized by Karl Keit (1907-2001), credulous UFO-impresario and president of the Deutsche UFO/IFO-Studiengemeinschaft (DUIST), Oberth repeated claims first made in 1954 that he was no longer willing to exclude the possibility that UFOs could indeed be of extraterrestrial origin. Having examined all existing arguments, Oberth proclaimed in front of ‘many hundreds of people who apparently believe that the Earth has been visited by emissaries from outer space,’ as The Times wrote, that he was now convinced that flying saucers were ‘very real,’ and carrying visitors from outer space.

Oberth later repeated that ‘the UFOs are a kind of sentinel, here simply to observe and report; because a humankind which is as gifted as inventors and researchers as we are, yet has remained politically and morally on our stage of development, constitutes a threat to the entire cosmos.’

It’s interesting to contemplate who Oberth was around. The highest ranking military people in the country at the time, and more. Fast forward to today decades later, and we now know that military agencies have been covering up the phenomenon for quite some time. I have no doubt that his “beliefs” are in fact knowledge gained not only through his work but through the knowledge of his colleagues as well.

A brief discussion about the phenomenon: UFOs, once considered a “conspiracy theory” and subjected to, as I’ve emphasized in many of my other articles on this topic, an “official campaign of ridicule and secrecy,” (first CIA director Roscoe Hillenkoetter)  have now exploded within the mainstream. What the majority of people constitute as “proof” has been released into the public domain. This proof comes in the form of video footage, high ranking military witness testimony, pictures, and even supposed debris captured from some of these mysterious objects, as well as whole objects themselves. In the mainstream they are now known as UAPs or, Unidentified Aerial Phenomenon. Multiple governments around the world have admitted to their existence, with the latest example being the United States with multiple videos that have been released from the U.S. Navy through the Pentagon. Mainstream media outlets like the New York Times and CNN are covering the topic with extreme credibility. The question is no longer whether or not they exist, it’s, what are they?

To those who believe UFOs are not real, and that this is some sort of deception agenda, I ask you, why would the government and intelligence agencies spend so many resources trying to cover up their existence and ridicule the idea that they are real and place them into the “conspiracy bucket” if they wanted to use them for deception? They’ve been doing this for decades. Granted, we can never rely on governments and mainstream media for any type of truth these days it seems, as they often take real events, or staged events, and try to shape our perception of the event. I believe this may happen and may be happening with UFOs, that they may be portrayed in a light that is not representative of truth. We’ve seen this with various other global issues, and we may get a ‘sanitized’ version of “disclosure” from the government, when in reality this is a vast topic with a wealth of information and examples behind it. There are tens and thousands of incidents, if not hundreds of thousands of documented incidents and stories to examine.

So, what are they? Based on my research, just as there was evidence for the existence of UFOs when they were a “conspiracy theory”, there is, in my opinion, abundant evidence that some of these objects are from life that does not originate on Earth, be it extraterrestrial, extra-dimensional, or whatever you want to call it. I believe this is known, and if it’s presented in “mainstream UFO disclosure” that these objects are most likely advanced technology from another country, I do believe that will be a lie. If these objects are presented as some sort of threat, I also believe that will be very suspicious given the fact that the behavior of these objects are not at all indicative of that. Perhaps that’s where mainstream media deception will come in?

You’d be surprised at how many people shared this belief, and have for many years. For example, in 1974, Margaret Mead stated.

“There are unidentified flying objects. That is, there are a hard core of cases – perhaps 20 to 30 percent in different studies – for which there is no explanation…We can only imagine what purpose lies behind the activities of these quiet, harmlessly cruising objects that time and again approach the earth. The most likely explanation, it seems to me, is that they are simply watching what we are up to.”  “UFOs – Visitors from Outer Space?,” Redbook, vol. 143, September 1974.)

When asked if she “believed” in UFOs, she is also quoted as saying:

I think this is a silly question, born of confusion. Belief has nothing to do with matters of faith; it has nothing to do with the kind of knowledge that is based on scientific inquiry. We should not bracket UFOs with angels, archangels, devils and demons. But this is just what we’re doing when we ask whether people believe in UFOs; as if their existence were an article of faith. Do people believe in the sun or the moon, or the changing seasons, or the chairs they’re sitting on? When we want to understand something strange, something previously unknown to anyone, we have to begin with an entirely different set of questions. What is it? How does it work? Are their recurrent regularities? Beginning in this way, with an open mind, people can take a hard look at all the evidence.

Many people have looked at the “evidence” when it comes to the extraterrestrial hypothesis, the idea that these objects, or at least some of them, are extraterrestrial in origin. Mead was certainly one of them.

The particular quote above from Mead reminds me of another I’ve used before,

“There seems to be a deep concern that the whole field will be tarnished by studying a phenomenon that is tainted by its association with superstition, spiritualism and magic. Protecting against this possibility sometimes seems more important than encouraging scientific exploration or protecting academic freedom. But this may be changing.”
– Cassandra Vieten, PhD and President/CEO at the Institute of Noetic Sciences (source)

These days, it seems belief rules. If an investigation or scientific data shows something that challenges what we currently believe, it may be discarded, labelled as “pseudoscience” or simply unacknowledged. This begs the question, is science today really science?

That being said, it’s good to see the collective mind opening up. We’re living in exciting times! This topic is a big game changer, it has the potential to push humanity into another paradigm shifting realization, one that has us ask more questions about the nature of our reality, and why we live the way we do here on planet Earth when we have the potential to do so much better, and create a human experience where all life can thrive.