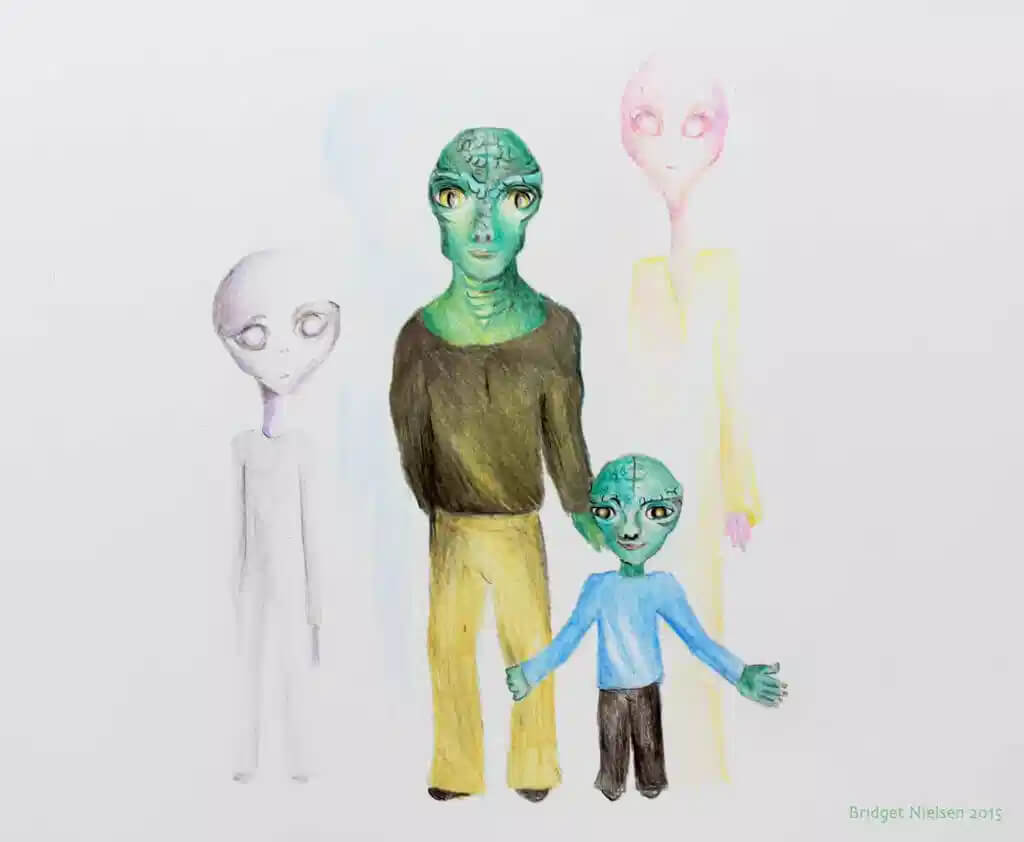 The question: “Do aliens exist or not?” is as exciting as horrible at the same time. Are we alone in this universe or there are others? Still, there is no solid proof, but many people strongly believe in the existence of the ETs, and a few of them claimed to have seen them and even about breeding with aliens. Meet 34-year-old Bridget Nielsen from Arizona, the United States, whose story is extremely remarkable. She claimed to be a mother of several alien hybrid children of different races.

Bridget Nielsen is one of the few abductees who is actually chosen by otherworldly beings for giving birth to human-alien children as she claimed in her first video on YouTube in 2012. She said that she had given birth to dozens of alien children on a giant spaceship in space but cannot disclose their identity (photos) because alien fathers do not want them to visit the Earth.

Nielsen is a member of the “Hybrid Baby Community” which connects alien hybrid children to their human parents and on a mission “to create a high-frequency cocoon, based on the guidance received from the kids.”

Some women who are members of the community claimed to had made love with aliens. Others stated that they had been abducted but instead of physical relations with aliens, their DNA’s were taken, harvested, and created into hybrid kids. Besides, some women were used as surrogate mothers of alien children.

Surprisingly, Nielsen reportedly enjoyed mating with aliens and said she had a positive experience with ETs.

“I’ve only really had positive interactions with ETs. You know, I’ve seen visuals of them, I felt them, they’ve helped me. I’m in communication with them in very positive ways to help us awaken in our future here in 2012, but I haven’t had those negative experiences and remembered my own abduction and so, I’d like to go through that because for most people, all that they remember is that fear and that pain and culturally, that’s what we’re all remembering as we can see reflected in our movies in film.”

She confidently said that the greys are the future human beings who from time to time contact and abduct humans to strengthen their race and increase their population as their bodies are more fertile to give birth. What’s more, they are here to awaken humankind and prevent them to become like them.

She is not specific about the time when aliens started using her body to create hybrid kids, but she remembers that she sometimes skipped her menstrual cycles and suddenly, it returned back to normal.

“They actually have put implant you with babies and then you have them and they grow either in your stomach or in the test tubes on the ships,” she said.

Nielson once saw an alien spaceship in the sky and instantly felt pain in her ovaries. She understood that it was a sign that aliens took her eggs to the spaceship.

She knows that she has hybrid children in another dimension and not just one but more than 10.

All these claims by Nielsen sound bizarre, but what if they are true? Another shocking claim from her is that the extraterrestrials only take females from selective gene pools and who are willing to give birth to alien children. They are on a mission to replace humanity with advanced and improved alien hybrids.

“They are not just taking our children — they are creating a hybrid race to better humanity,” she said.

She explained how the Greys use human ecstasy to create hybrid children. She wrote that during orgasm, the aliens capture the “human’s 6th density energy to create the vibrational and archetypal template for the hybrids.”

She drew a sketch of a reptilian hybrid boy who was the result of this “template extraction” with a reptilian father. According to her, the Greys have been using the DNA from 8 alien species to create human-alien hybrids. These species are Arcturian, Orion, Pleiadian, Sirian, Obsilo, Annunaki, Zeta Reticulan, and Homo Sapiens.

There are several such documented cases including Aluna Verse and Meng Zhaoguo. They both shared a similar story where they had intimate contact with aliens.

Of course, Nielsen has suffered after such claims. She lost friends and her career as a marketing professional, even her own mother does not believe her story. She cannot find any boyfriend or husband after her stories came out and has no normal relationships.