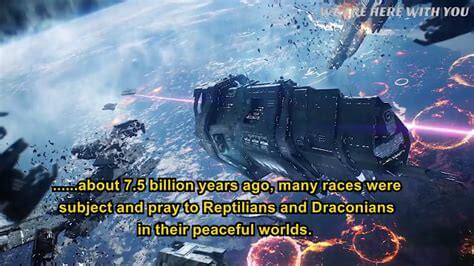 Mankind is not the only intelligent species in this galaxy, and neither are we the only humanoid civilization. Even within our immediate galactic neighborhood, there are several humanoid races. Most of them are physical; some are not. Most of these races have visited the Earth. Some of them still do, and even have bases on Earth. Some alien humanoid races also played an important part in the history of Earth and of mankind. As a matter of fact, mankind did not even originate here on planet Earth. We are descendants of these other human-like races who visited Earth aeons ago. Therefore, if we wish to understand our history and our nature as a species, we have to go back in time, millions of years ago, to those worlds where mankind came into existence.

The most important humanoid civilizations can be found in the star systems of Lyra, Vega, Sirius, Orion, the Pleiades, and Andromeda. Lyra is the place where the cradle of the humanoid races once stood, millions of year ago. Most races are descendants from the Lyran/Vegan Groups. They usually are crossbreeds between local stock and Lyran/Vegan DNA.

To understand our history, we have to understand their history: How they ventured into space and started colonizing; How they encountered other races and civilizations; How conflicts erupted with other civilizations, and how this led to mass migrations and to endless wars. Some wars are on Earth, are re-enactments of wars that have already been fought elsewhere.

Most sources agree that, in our part of the Galaxy, the cradle of mankind stood in the constellation of Lyra, 40 million years ago. Over time several humanoid species evolved. The majority of them were Lyran Caucasians, who looked virtually identical to the Caucasian race on Earth, today (though many of them were taller). Approximately 22 million years ago, they were capable of traveling to other stars. As soon as they started exploring other systems in their galactic vicinity, they also began to colonize neighboring planets. It didn’t take long before they came across other humanoid races. The first such race they encountered was in Vega, also within the Lyran constellation (but fairly close to Earth, as it is only 25 light years away from us). Vega, too, was inhabited by humanoid races, most of them brown-skinned. These first encounters went peacefully. Soon the populations started interacting, and joined forces in the further exploration and colonization of space. They went to Andromeda, Pleiades, Cygnus Alpha,Tau Ceti, Orion, Sirius, Altair, Alpha Centauri, Arcturus , Antares, Hyades, Sagittarius A & B Cassiopia, Procyon and other worlds.

One of the first non-humanoid races they came across was the Reptilian race that had its home in the Draco constellation. Nobody is really sure where the Draco originated. They ‘were brought’ here from another another universe, billions of years ago. They were capable of space travel long before mankind even existed. At the time of the first encounters the Draco Reptilians already had been exploring and colonizing for aeons, and had a vast organised empire, usually referred to as the Draconian Empire . This empire still exists today, and is one of the main players on the galactic exopolitical scene. The empire originated on Thuban (Alpha Draconis), and consists mainly of various groups of reptilian and dinosaur-like species, but humanoid worlds have joined, too, some forcefully, some willingly. – Its most important members are based in Alpha Draconis, Epsilon Bootes, Zeta II Reticuli, Polaris, Rigel (Orion), Bellatrix (Orion), Capella (Alpha Aurigae) Ursa minor and Ursa major Sirius B Hydra , etc.

The first encounters between the Lyran/Vegan explorers and the Draconian explorers did not go well. Conflicts broke out over worlds they both wanted to colonize, and had claimed for themselves. It was in the Ring Nebula that the first fights broke out. Things then came to a dramatic escalation when the Draconians engaged in a full force attack upon the Lyran home planets and destroyed several of them, killing millions of Lyrans. At that time, however, the majority of Lyrans had already emigrated to other worlds. They vowed to retaliate.

While the first encounters and first conflicts between the two species took place in the Lyra Constellation, it was Orion that would become the main stage for their altercations. The worlds of Orion, at that time, were inhabited by various groups of Lyrans, Vegans, and Reptilians. (The Greys only came much later). After the Draconian Reptilians had attacked the Lyran home worlds, the Lyrans in the Orion colonies retaliated by attacking Reptilian colonies in Orion. Of course, the Draconian Reptilians responded.

By that time, however, some humanoid (mainly Vegan) races had already started co-operating with reptilian races because they found they shared a common agenda of space exploration and colonization. (This co-operation would eventually lead to the establishment of the Orion Empire . This Orion Empire is more recent than the Draconian Empire, and was established after the Vegans engaged in space exploration. It consists of a mixture of reptilian and humanoid civilization. Nowadays, the Reptilians in Orion are genetically engineered half breeds of the original Draco/Ciakar reptilian races form the majority of these reptilian civilizations, whereas most of the humanoid civilizations are of Lyran/Vegan descent. Approximately one in every six worlds in the Orion constellation has a reptilian population. When the wars between the Lyrans and Draconians started, there was no Orion Empire, yet; but there where co-operation agreements).

The wars escalated fast. Several worlds that been subjugated by the Draconians, started an uprising and joined the Lyrans in fighting the Draconians. This joining of forces would lead to the foundation of a “ Federation of Planets ” whose members stood united in fighting the Draconians. The Federation still exists today, and still is one of the main players. It consists of civilizations from the Lyra constellation, from the Andromeda Constellation, from the Pleiades and Hyades open clusters, from Iumma [Wolf 424], Procyon, Tau Ceti, Alpha Centauri, and Epsilon Eridani, all of which are of Lyran/Vegan heritage. They were joined by a number of non-physical races, by some Sirian groups, as well as by some Orion organizations, and by various civilizations from a parallel universe such as the Koldasians. It even got some unexpected members when some worlds with reptilian inhabitants joined, wanting to free themselves from submission to the Draconians.

The Vegans and Reptilians of Orion that had made co-operation agreements with each other, probably established the Orion Empire around the same time as the Federation came into existence. In all likelihood, they did this to stay out of the wars. That plan, however, was to fail.

Over time the nature of the wars changed. Where the war initially was over territory, it became a war of mind-sets and ideologies. On the one hand there was a group of mainly humanoid races that had joined forces in the Federation. Many of its members felt they had been ‘victimized’ by the Draconians, and therefore rejected the idea of colonization and intervention in other worlds. Gradually, they became committed to the idea of service to others . On the other hand there was a mixed group of humanoids and reptilian races that propagated service to self . In this ideology, the Draconian and Orion Empires found each other as like-minded, and this would lead to their joining forces. Since then, they are often referred to as the Orion/Draconian Empires.

Initially the philosophy of service to self implied that when everybody takes care of him- or herself, then the whole is taken care of, too. But gradually it changed into service to self, if necessary at the expense of others, which resulted in “victimizes” and “victims.” The victims and their allies, who had joined forces in a Federation, started looking upon the victimizes as evil, while they started seeing themselves as good. A s a result the wars got polarized, and ended up being wars of duality, even though things didn’t start of like that, at all. Now history is filled with examples of how a polarized conflict can never be resolved as long as the polarities remain. It was no different in the Orion wars that lasted for aeons, but where no breakthroughs by either side would ever be lasting.

The earliest humanoid civilizations were explorers and colonizers, which led to some migrations. When the wars erupted, more migrations followed. If we dramatically simplify things, we could say that the spread of mankind through this part of the galaxy, over millions of years, happened in seven consecutive waves of colonization/migrations.

1. As was mentioned before, the story starts in Lyra, where approx. 22 million years ago, the first humanoid civilizations began their space exploration adventures, to boldly go where no man had gone before. The first worlds they colonized were Vega, that itself was already inhabited by a humanoid species, and Apex. Later on the Lyran explorers would also move to Sirius, and on to Orion; while others already came to Earth, and from Earth moved on to the Pleiades.

2. The original humanoid population of Vega soon started their own space explorations, and created settlements on worlds in Altair, Centauri, Sirius, and Orion. Some of them even came to Earth. While exploring the Ring Nebula, they came across lizard-like races that claimed the territory for themselves. This is where the Galactic wars erupted.

3. A nuclear war on Apex destroyed much of its surface, forcing its inhabitants to live underground for thousands of years. The radiation also damaged their reproductive capacities, forcing them to use cloning as a way to survive as a species. The Apexians would become the Greys from Zeta Reticuli.

4. Settlers also moved to Arcturus, where as a species, they advanced very fast. Most Arcturians nowadays are non-physical, higher-dimensional beings, though physical races still exist as well.

5. In the worlds around Sirius the humanoid settlers found many other species that were not like them at all. Some settlers therefore chose to move on to Orion. Later on, loads of Sirians migrated to Earth, too.

6. The main battleground for the Galactic Wars was in Orion. Because of this, many descendants of humanoid settlers in Orion, fled, and also migrated to Earth.

7. Some of the very first Lyran colonizers had to come to Earth. When their descendants were afraid the Galactic Wars were coming too close to Earth, most of them moved to the Pleiades. After time, however, some of their descendants decided to hook up with their relatives from Earth again, and came back to Earth.