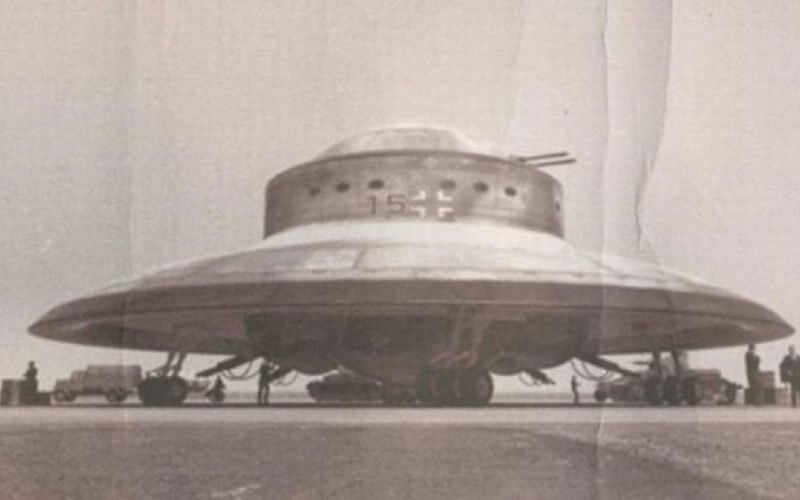 There is no shortage of strange documents in the CIA’s Freedom of Information Act (FOIA) electronic reading room. Many reveal the agency’s efforts to keep tabs on the technological developments of other countries, especially during and after World War II.

One document brings up a famous German engineer named Georg Klein. He expressed that “though many people believe the ‘flying saucers’ to be a postwar development, they were actually in the planning stage in German aircraft factories as early as 1941.”

The document explains how a German newspaper published an interview with Klein, describing the experimental construction of flying saucers carried out by him from 1941 to 1945.

The “flying saucer” reached an altitude of 12,400 meters within 3 minutes and a speed of 2,200 kilometers per hour. Klein emphasized that in accordance with German plans, the speed of these “saucers” would reah 4,000 kilometers per hour. One difficulty, according to Klein, was the problem of obtaining the materials to be used for the construction of the “saucers,” but even this had been solved by German engineers toward the end of 1945, and construction on the objects was scheduled to begin, Klein added.

According to Klein, by 1944 the Germans had already built three saucers for testing. Were these the “foo” fighters all of these American pilots were reporting at the time? The document describes the three discs:

One type actually had the shape of a disc, with an interior cabin, and was built at the (unidentified) factories, which had also built the V2 rockets. This model was 42 meters in diameter. The other model had the shape of a ring, with raised sides and a spherically shaped pilot’s cabin placed on the outside, in the center of the ring…(and) both models had the ability to take off vertically and to land in an extremely restricted area, like helicopters.

The engineers were ordered to destroy these saucers, including all of the plans for them.

The engineers at the Mite factories in Breslau, however, were not warned in sufficient time of the Soviet approach, and the Soviets, therefore, succeeded in seizing their material. Plans, as well as specialized personnel, were immediately sent directly to the Society Union under heavy guard.

Aviation writer Nick Cook is one of many to have investigated this topic, and in 2002 he came to the conclusion that the Nazis had experimented “with a form of science the rest of the world had never remotely considered” and which continues to be suppressed today.

“[Italian researcher] Renato Vesco argued that Germans had developed antigravity. Disc-shaped and tubular craft were built and tested near the end of the Second World War, which, he argued, was the proper explanation of foo fighters. These concepts, he maintained, were developed by the Americans and Soviets and led directly to flying saucers.”

Dr. David Clarke is an investigative journalist, reader and lecturer at Sheffield Hallam University in England. He was also the curator for The National Archives UFO project from 2008–2013, and regularly comments on national and international media on UFOs.

Even though they have been partly censored they can’t conceal the fact the UK military were interested in capturing UFO technology or what they coyly refer to as ‘novel weapon technology’… And the files reveal they were desperate to capture this technology – wherever it came from – before the Russians or the Chinese got hold of it first… Although this was 1997, Russia was still regarded as an undefeated enemy with a weapons programme regarded as a threat to the West.

So, perhaps this reverse engineering started long ago?

Apollo 13 astronaut Dr. Edgar Mitchell once told the world that “Yes there have been crashed craft, and bodies recovered.” He is seen making these statements in the ‘Thrive’ documentary.

Eric W. Davis, a renowned astrophysicist who worked with the Pentagon UFO program stated that he gave a classified briefing to a Defense Department Agency, as recently as March 2020 about retrievals from “off-world vehicles not made on this Earth.” Christopher Mellon, a former Deputy Assistant Defense Secretary for Intelligence from 1997 to 2002 has confirmed that he was present during Davis’ testimony. He himself has been quite outspoken about the phenomenon over the past few years

This is why many people in the field have been asking whether or not some of these strange objects are “ours” or “theirs.” There seems to be multiple possibilities based on my research.

Humanity has a history of believing one thing, and then having a paradigm-busting moment that shatters that belief. Take for example prominent physicist Lord Kelvin, who stated in the year 1900 that, “There is nothing new to be discovered in physics now. All that remains is more and more precise measurement.” It wasn’t long after this statement when Einstein published his paper on special relativity. Einstein’s theories challenged the accepted framework of knowledge at the time, and forced the scientific community to open up to an alternative view of reality.

Will the UFO phenomenon be the same, or will it be used like many other major global issues – for purposes and responses that seem to benefit the rich, wealthy and powerful? Will the perception of the phenomenon given to us by the mainstream be accurate? Can we continue to keep relying on mainstream media and government to share truth with the citizenry?

There’s a reason why so many people have lost trust in these institutions.