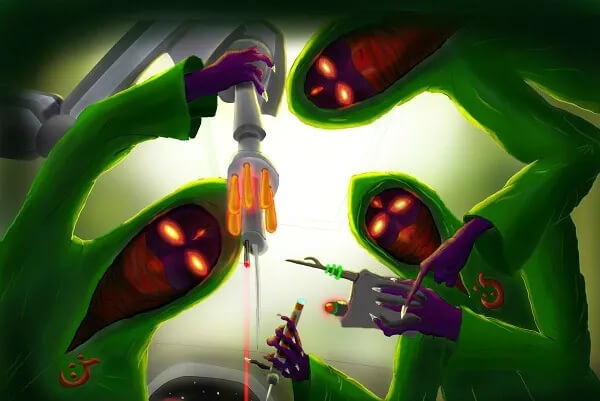 UFO sightings are a very amusing subject to talk about. People sometimes make bizarre claims which are not easy to understand. There are hundreds of cases of UFO encounters that involve extraterrestrial beings who abduct humans for medical purposes. Gabriella Versacci claimed to have been abducted by robot-like creatures and unwillingly copulated on a spaceship.

Gabriella’s case was well-researched, examined, and studied by Thomas Eddie Bullard, a researcher of The Center for UFO (CUFOS).

It began on October 16th, 1973, when Gabriella Versacci (43) was driving in the early morning (at approx. 2 a.m.) on an expressway, somewhere near the English village known as Langford Budville in Somerset, England. She was alone in the car, and the highway was located in a pretty deserted place. Meanwhile, she saw a light, coming from a single source that seemed to be motionless.

As she approached the light closer, it began increasing in size and all of a sudden, her car began to malfunction. First, the headlights cut out, and then the engine halted. Somehow, she managed to pull her car on a sideway.

It was completely dark, there were no passers-by, and with a dead car, Gabriella panicked. She went out, put her hood on, and stood there helpless. Suddenly, she heard a humming sound. The sound first fainted but then its intensity gradually increased.

[Note] Astronomer Jacques Vallee said that UFOs are a “physical object that interacts with the environment that causes effects on the witnesses on the psychology and the physiology and leaves traces on the ground and yet are capable of appeared to be manipulating time and space in ways that go beyond what our physics understands.”

Gabriella felt a hand over her shoulder which pushed her to the ground. She struggled to face her assailant and saw a tall, dark-colored metallic figure. She lost her consciousness after seeing flickering multi-colored lights.

According to her, as she regained consciousness, she found herself standing in the field with the robot-like figures next to her. There, she saw a bright gray-colored spaceship on the ground. She described the craft as about 20 feet tall and 40-feet wide with elongated windows in the middle, from where yellow lights were coming out.

Gabriella understood that the humming sound she heard before was coming from the UFO. Then she again blacked out and found herself strapped on a table that was situated in the center of a strange circular room. The woman realized that her clothes had been taken off and instead of them, she was covered with a blue blanket.

It was freezing in the room. Her hands and legs were bound with rubber bands to the table, and she could feel its cold surface. She took a brief look around and saw a robot that seemed to be standing inactive near the wall.

Subsequently, three human-like figures entered the room and surrounded her. Two of them stood on the side of the table while the third one stood near her feet and picked up cube-like objects. As soon as he placed them on the equipment rail, they illuminated.

Gabriella accounted that the three figures had the same height, about 170-175 cm. They were slim, fair-skinned, and their clothes looked the same. They were wearing hats, and their faces were covered with some masks so that only eyes were visible. She understood that the men were examining her. During the whole process, they were silent, did not speak a word to each other, and occasionally nodded. She could not even hear them breathing.

They used a small knife tool to take a nail paring from her right index finger’s nail. Her blood sample was taken. Then they removed the blanket and inspected her groin with a pencil-like tool and a suction device.

Gabriella was constantly looking at the inactive robot which made the main examiner speak to her in perfect English. She was told that the robot was programmed to perform certain tasks. The examiner had a deep male voice but, strangely, neither his eyes nor mouth were moving. After finishing their work, all three men left the room, leaving her in a blanket that did not provide enough warmth.

One of the aliens returned and walked to the far end of the table. He lifted her blanket from the bottom and stared at her body. This made her uncomfortable and she sharted struggling with her bonds. The alien injected some drug into her body and then copulated with her.

At some time, three men came to Gabriella and released her from the bonds. She blacked out for the third time and when she regained her consciousness, she was standing in a deserted place, dressed in her clothes. Gabriella drove back home.

Researchers reportedly found out that she was an upstanding member of her community with no reason to lie about the incident.