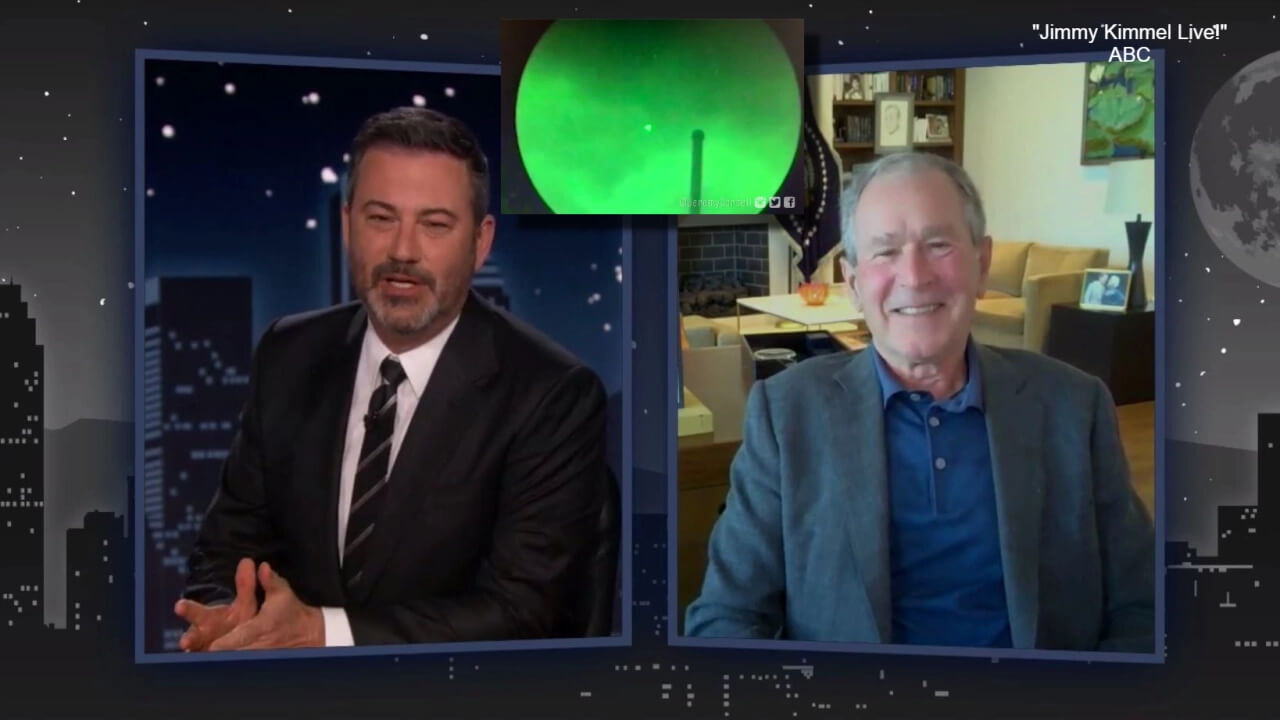 Not every talk show host would take the time to ask a former United States president about UFOs if given the chance, but Jimmy Kimmel did.

With the topic of UFOs, or UAPs as the government now calls them, making headlines around the world this month, Kimmel asked former President George W. Bush about it on his show, “Jimmy Kimmel Live!” last night.

Kimmel first showed Bush the night vision video filmmaker  Jeremy Corbell published last week. The video shows what appears to be pyramid shaped objects in the sky over the USS Omaha off the coast of Southern California. The Pentagon has confirmed that Navy personnel did record this video.

Kimmel the asked if the former president if he would be surprised if we were visited by creatures from another planet. President Bush quickly and enthusiastically said “Yeah!”

Below is the complete exchange between the two which lasted 1 minute 20 seconds.

Jimmy Kimmel
Last time you were here, we did talk about something that I’m very interested in. And as I’ve said a number of occasions, the first thing I would do if I was president is go right to the UFO files and find out what’s going on. You did not shed any light on that situation. But now there’s a video, I wonder if you’ve seen this video that has been verified by the Pentagon, which seems to be, this video is either a Dorito, or a UFO, or possibly a slice of pizza. Nobody knows for sure. But it is an unidentified flying object or something like that. Now that this has been verified by the Pentagon, would you be surprised if we were visited by creatures from another planet?

Jimmy Kimmel
You would be surprised?

George W. Bush
Wouldn’t you be?

Jimmy Kimmel
Well, yeah, but I haven’t seen anything. And I think it’s interesting that you said you’d be surprised, because if you’ve seen evidence, so you’re saying there is no evidence. President Clinton told me that if he had seen evidence, he would tell everyone that he’d seen it. Do you feel the same way?

Jimmy Kimmel
You wouldn’t? You don’t think we can handle it?

George W. Bush
I’m afraid, I’m afraid it might spin you into orbit.

Most of the former presidents have been asked about UFOs at some point.

Most recently President Trump was asked by Fox News host Maria Bartiromo about it in October 2019.

President Obama was also asked about UFOs by a late night talk show host, Stephen Colbert during a November 2020 interview.

Former Presidents Jimmy Carter and Ronald Reagan say they had UFO sightings of their own. George Knapp reported on this in March 2016.