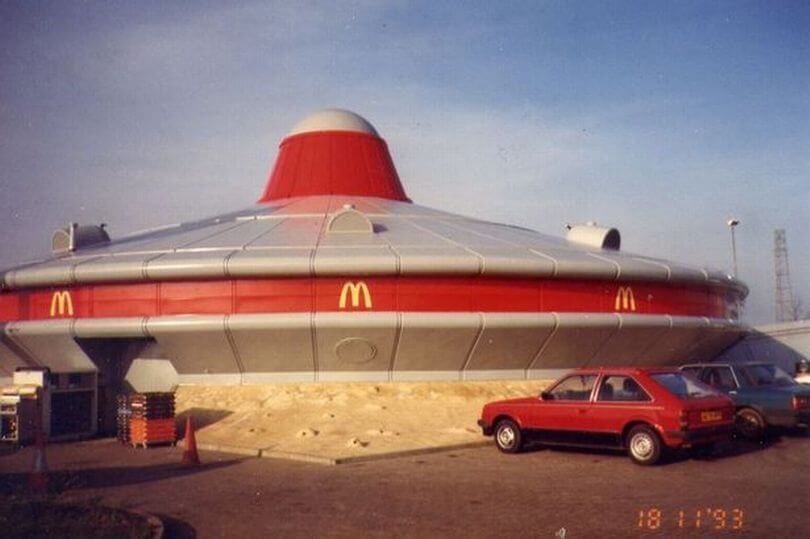 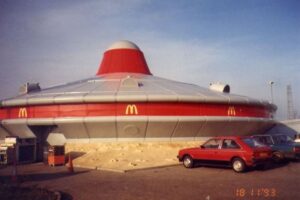 According to its timestamp, the video dates back to 1993.

It shows the futuristic exterior of the building, then a newly-reopened McDonald’s branch, before giving a brief glimpse inside.

The video also provides a look into the distinctive tunnel-like entrance corridor that lead customers into the restaurant back in the day.

Writing online, one former visitor said of the restaurant: “Ahhh such memories of this place!! I used to LOVE going there as a kid.

“I loved it all from the pulsating lights in the entrance to the robot rides and well wow!”

Anyone who grew up in the 90s in Cambridgeshire will have fond memories of one iconic McDonald’s restaurant.

The UFO-shaped diner, just off the A1 at Alconbury, near Huntingdon, was the definition of space-age architecture.

Now, an ex-employee has lifted the lid on six secrets from working inside the restaurant.

Originally opened in 1990 as a Megatron – a short-lived vision for saucer-shaped eateries – the site was converted into a McDonald’s in 1993.

David Meridith, 41, worked his first job as a maintenance man at the restaurant from 1997 to 2000, when it finally closed down.

He told CambridgeshireLive about the six things he remembers from working at the UFO Maccies.

The Alconbury McDonald’s kept a remnant of its predecessor’s futuristic legacy – a trailblazing computer ordering system.

It’s now commonplace in Maccies to order on a screen, but in the 90s this was revolutionary stuff.

“You ordered on a computer at your table and waited for your food to come,” David recalled from his days of visiting with his family.

Despite its space-age credentials, the inside of the restaurant was “dark and gloomy”, according to David.

“The lights we had were very high up and there were no windows,” he added.

A video from inside the restaurant shows the black ceiling and low lights – which some say added to the spaceship atmosphere.

With RAF Alconbury just round the corner, the McDonald’s restaurant was a hit with military personnel.

The US Air Force took over the base in 1942 and the local Maccies proved a popular spot for breakfast, lunch and dinner, David said.

And tourists flocked to the site too.

“Some people turned off just to have a look,” David said.

“It was always packed. People struggled to get seating. It was too busy on Saturday and Sunday.”

“When they put the drive-thru in I don’t know what they were thinking,” David said.

He explained how drivers had to queue on the main road – the A604 – because the car park was too small to let everyone in.

“I did traffic control and sometimes on Saturdays I would have to turn people away.”

The restaurant was fitted with sound buffers to avoid echoes bouncing around the circular roof, David said.

“We had sound buffers in there to keep the sound down.”

He said it was a particular issue for kids’ birthday parties.

“The kids were very loud. With 30 or 40 kids it got very boisterous,” David recalled.

The UFO Maccies sadly closed in 2000 – David said it was due to soaring maintenance costs.

“There was a downturn in sales and maintaining it was costing more than sales in the last year,” he added.