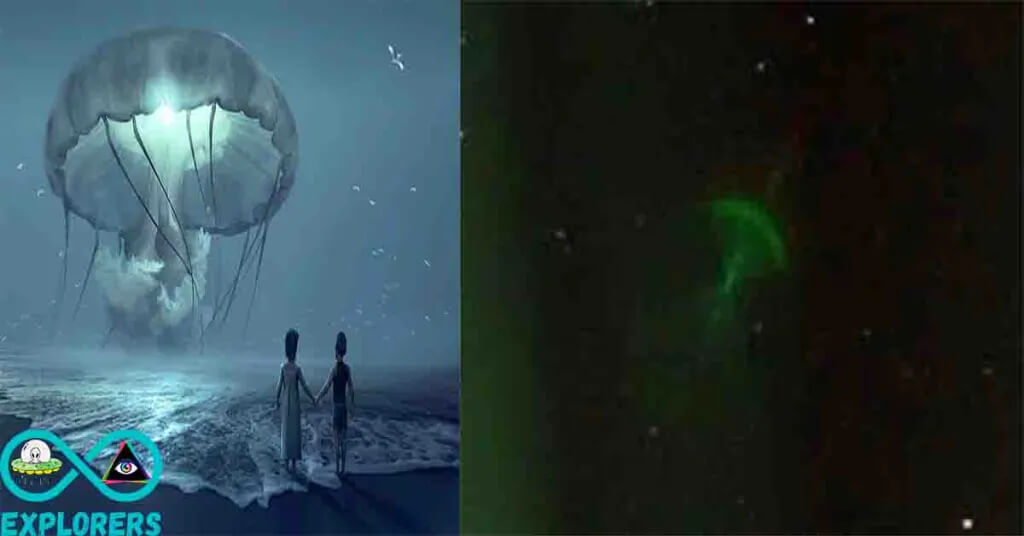 There are reports of the observation of strange flying objects, which in their form more resemble a living creature and something like a flying jellyfish or squid.

In the 1950s, a police officer in England claimed that he encountered a low-flying “celestial jellyfish” while riding his bike while patrolling the area.

This man assured that the jellyfish seemed to “float” in the air right in front of him, and when he bumped into it, he felt like he was caught in a soft blanket that smelled a little unpleasantly of something like mold.

In 1958, another police officer ran into something similar, this time from Florida. A police officer named Faustin Galegos discovered a translucent purple soccer ball-sized spot right outside his house.

It resembled a still-living sea jellyfish, which, purely theoretically, could be dragged so far from the ocean coast by some bird. However, when the man took this “jellyfish” in his hands, it literally melted or evaporated without a trace right before his eyes.

A few years ago, the NorCal blogs (a blogging site for Northern California) posted an unusual post from a user calling himself Pai Guevara, who claims that his uncle, Oscar Guevara, was involved in a very bizarre scientific study in the 1950s and 1960s years.

In remote areas north of San Francisco, he said, a series of sightings of what they called “space jelly” had been observed over a decade. These translucent “creatures” gathered in “flocks” in the upper atmosphere along the coast, and then flew into even higher layers of the atmosphere and disappeared from view.

Pye even showed a letter he allegedly received from his uncle describing the phenomenon and research:

“This California fusion of ‘space jellies,’ as we called them, was supposed to be part of their seasonal migration in and around the western Pacific.

Thanks to a small grant from several scientific charitable organizations, I have developed a small, high-altitude ultralight aircraft capable of flying long distances (the first of its kind) with a deplorable and detachable in-flight egg-shaped helium balloon.

This platform was specially designed (for closer observation of the “flocks of jelly”), since as a result of observations and experiments, it became obvious that the behavior of these creatures is disrupted by the approach of larger planes. And it is no coincidence that this apparatus had a clear external resemblance to a large, presumably mature form of “space jelly”.

Working on a budget, I used a modified scuba gear attached to a motorcycle helmet and a small blacksmith’s bellows that evolved into a crude yet effective and light breathing system for high altitudes. To keep me warm, I put on a gorilla suit (purchased at an auction in Emeryville) and fitted it with goose-down lining.

In six weeks in the fall of 1973, I caught most of these clear jellyfish with this plane. None of the captured did survive and after a few minutes, they disappeared into a strange haze.

In addition to the unfortunate loss of the test subjects, there was another unfortunate circumstance. During the last mission, I dropped a balloon from the Pacific Ocean over the Farallons at an altitude of about 5000 feet towards my hidden base of operations in a remote area [redacted]. And there I was spotted by the US Navy crew on a training flight in a restored antique Consolidated Vultee PB2Y Coronado, which was due to be on display at Fleet Week near Fisherman’s Wharf a few days later.

They veered off course, followed me, and slowly circled the San Francisco Bay. So close that I could see the faces of the pilot and crew. Their plane then abruptly swooped down and landed near the Mare Island naval shipyard in what appears to have been an emergency landing.

A few weeks later, I learned through some Navy pilots in Vallejo who hung out at the [redacted] grill on Fridays, claimed that the pilot and crew who had exited that plane had been mumbling incoherently for several days, “Flying Bearfish. flying bear fish … “

Needless to say, this story has never been declassified and most likely never will be. The only reason I’m sharing this now is to allay any fears that may still exist about these creatures and the assurance that no one in their right mind would ever believe it. “

This is a truly vast and very impressive story, and one cannot help but wonder how true it is. Is a guy in a gorilla costume collecting flying jellyfish in the upper atmosphere? Flying bear fish? This is all pretty weird, you can’t just make it all up.

The next sighting of the creature, now more like a sky squid, happened on December 24, 1999, in Belarus. On this day, two witnesses from the Vitebsk region saw a huge elongated object in the sky, which was blue and red, like “the color of clouds at sunset”, with a slightly angular shade and rounded shape, with an asymmetrical front and back, which were described as fuzzy as if blurry.

The object seemed brighter than the early evening sky and was slightly luminous, translucent, and it seemed that it was pulsing all over as it moved like something alive, and it moved across the sky as if a sea creature was floating in the water, while completely silent.

The rest of the sky was perfectly clear, and both witnesses described that they had the feeling that they were not looking at any vehicle, but as a living being. Both eyewitnesses briefly observed this “squid”, as the object suddenly seemed to “disintegrate into dots” before completely disappearing.

It is interesting to note that there is one report from an Aeroflot pilot who claimed to have seen something similar while flying over the same area in 1985.

A resident of Groningen, Netherlands named Harry Perton once photographed the sky outside his home. It was just after the storm and the sky with clouds was very beautiful. Suddenly he noticed something strange – a pulsating green light was moving across the sky, which for a short time appeared and disappeared.

At first, Perton thought it must be just unusual lightning, some remnant of a receding storm, but when he returned home and checked his photographs, he saw that in one shot the object looked nothing like lightning, but rather resembled a sea jellyfish with a green glow around it.

This photo soon became popular on the web, prompting many speculations about what it could be, including that it was a camera glitch, lens flare, a small meteorite, space debris, some kind of meteorological phenomenon, or even just a fake. although the photographer himself has stated that he thinks there is a rational explanation for this, and he made no effort to prove that it is a UFO.

Needless to say, the strange object in Perton’s photo never received any logical definition in the end.

Another mysterious photograph was taken in Andenesme, Norway, by an eyewitness and amateur photographer named Per-Arne Milkalsen. As he looked through his photographs of the aurora borealis, he noticed in one of the pictures a strange green, glowing jellyfish-shaped object hovering over the landscape.

It really seemed to him like a lens flare or a play of light, but then he decided that it was still a solid “floating” object in the sky. It was so weird that he posted the photo on the Internet and there was a flood of responses.

Many speculated that it was the aurora borealis reflecting from something like a satellite or cloud, but it was also pointed out that such a reflection is unlikely to be green. The problem has not yet been completely resolved, and Mikalsen himself says the following: “I have never seen such an object before, and I cannot wait to find an explanation for this phenomenon.”

In 1998, a massive observation of a certain “celestial jellyfish” was recorded in China. On October 19 of that year, four military radar stations in Hebei province recorded a strange radar signature hovering near a military flight school in Changzhou, about 90 miles northwest of Shanghai.

When it was discovered that there were no known civilian or military aircraft in the area, the military became quite alarmed that a jet fighter was taken into the sky. As the pilot approached the anomaly, he saw firsthand an object in the shape of a mushroom or jellyfish, the lower part of which was “illuminated by bright hanging lights.”

When the plane appeared close to the “jellyfish”, the object began to rise sharply upward and the pilot asked for permission to shoot at him, but he was refused. Further, the “jellyfish” climbed up and the pilot also followed it, until at some point he ran out of fuel and was forced to return to his base.

Immediately, two more jet planes were sent to the “jellyfish”, but by the time they arrived at the scene, the strange object was no longer there. It was later revealed that 140 witnesses on the ground also saw the object, including many cadets and flight school officers who described the same thing.

Considering that the original report was published in the respected Hebei Daily, this story is considered credible due to the fact that this Chinese newspaper almost never mentions anything related to UFOs or the supernatural.

What kind of creatures could they be? One idea is that they represent a type of theoretical organism known as an “atmospheric animal”. Atmospheric animals, or atmospheric life forms as they are often called, are organisms that have been floating high in the atmosphere all their lives, which is why they have not yet been discovered by humans.

These creatures are most often described as having semi-solid or near-immaterial bodies, and some reports even claim that they can adjust their density from near-immaterial and invisible to more solid depending on as-yet-unknown factors.

Atmospheric animals also range in size from tiny and birdlike to giant monsters hundreds of feet long. While it is said that these mysterious creatures usually hide too high in the atmosphere or are too insignificant to be seen with the naked eye, there are times when, for whatever reason, they can be observed.

Indeed, over the years there have been a significant number of reports from all over the world describing unusual flying monsters that do not fit into the typical shape of UFOs, giant mythical birds, or other flying cryptids.