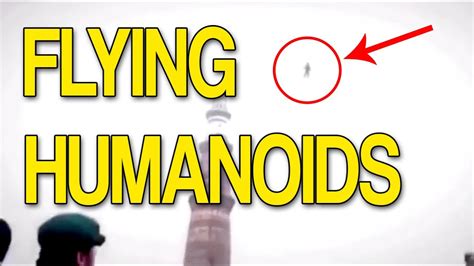 Sightings of flying humanoids are truly one of our world’s most bizarre unsolved mysteries. The narrative is usually as simple as it sounds. Witnesses report strange objects in the sky, but not the usual UFOs or flying saucers. They’re seeing humans, or human-like creatures, suspended in air, apparently flying on their own.

These rare events first gained worldwide attention after several reports from Mexico in the early 2000s, but their history and reach goes far beyond that.

Though it may take a little imagination, it is fairly easy to speculate on the origins and even the agendas of spacecraft from another world, but the truth behind these flying humanoids is hard to fathom. It’s also reasonable to debunk sightings of strange flying craft as misidentified airplanes, or even top-secret planes yet to be unveiled to the public.

But how do we reconcile the shape and form of a human flying in midair with our current understanding of modern technology, physics and the universe? There aren’t a whole lot of human-shaped things flying around in the sky! What else could account for these sightings?

What are flying humanoids and where do they come from? Many say they are extraterrestrial beings, just another example of the UFO phenomenon, but others attach a far more intriguing meaning to their appearance. Let’s take a deeper look at these Superman wannabes and try to get the bottom of things.

Sightings in Mexico and Around the World

Back in 2000, Mexican UFO researcher Salvador Guerrero was keeping an eye on the skies in hopes of spotting something interesting. What he ended up seeing was no doubt way more interesting than he ever bargained for! Guerrero witnessed, and filmed, a human floating in midair and moving through the sky. There was no parachute, and the being had an unmistakable humanoid form. This was an unidentified flying humanoid!

More sightings, and footage, followed from across Mexico. The strangest involved several distinct humanoid shapes apparently locked in some sort of engagement in the skies over Mexico City. One of the entities appeared to have large wings.

In another report, citizens of a small town claimed that “witches” were haunting their skies, and circling a cemetery overhead. The claim was accompanied by a grainy and blobbish image of the offending witch floating through the sky, but more interestingly police officers were allegedly attacked by the entity.

Sightings of flying humanoids aren’t limited to Mexico. Over the years, reports have emerged from places like the United States, South America, India, China and England.

With different people from various cultures seemingly spotting the same thing all across the globe, it appears we have a new kind of UFO sighting on our hands. What has spurred on this sudden phenomenon? Or, is it even a new phenomenon at all?

When we look back through the pages of history, is it possible that flying humanoids have been with us all along?

Legends of Flying Humanoids in Antiquity

We don’t have to look hard to find example of flying entities in ancient legend, religion and lore. An easy place to start is with the angels of Judeo-Christian and Islamic traditions. We all know angels as beings with mystical powers, usually depicted with wings and the ability to fly.

Angels have many jobs, from warriors to messengers to guides. Some, known as Ishim angels in the Jewish faith, are said to watch over humans here on Earth. We might also call them guardian angels.

Angels are found in many religions and cultures around the world. Other civilizations throughout history had their magical beings as well, all with incredible powers which often included the ability to fly. The Egyptians, Greeks and Romans had gods with different purposes, just as the archangels are said to have different jobs. Always the heavens are recognized as a holy place, and the gods travel to and from with ease.

Looking at these and other cases of flying entities from myth and religion, we might wonder if the flying humanoids everyone is seeing in modern times are actually angels or ancient gods.

Then again, it’s also possible that prehistoric people were seeing flying humanoids long before the idea of angels or gods came about and, without any other way to explain them, decided these flying people must be divine and magical.

Some people point to humans using rocket packs as a possible explanation for these sightings, but this isn’t reasonable. Real rocket packs are extremely dangerous to operate, and there aren’t very many of them around. Flight times are very limited, and it would be suicide for any operator to fly to the heights these humanoids are said to attain.

The prevailing opinion among many researchers is that flying humanoids are related to the UFO phenomenon. Technically, they are objects in the sky, and they are flying, so therefore they are unidentified flying objects. Within the UFO context, these could be aliens from another world simply piloting a one-man craft of some kind, or using some other technology unknown to us.

Another theory lies within the realm of cryptozoology. The legendary Mothman is an example of a flying humanoid creature that is said to inhabit the Point Pleasant, West Virginia, area. The Mothman notoriously appeared during the year leading up to the tragic collapse of the Silver Bridge in 1967, but sightings continue sporadically.

The Jersey Devil is another such flying creature, this one said to inhabit the Pine Barrens of New Jersey. Could there be some undiscovered animal out there, perhaps a giant bat or some other creature that may have the power of flight and be easily mistaken for a human?

The final explanation is of a supernatural origin. Could these humanoids be angels, demons, or some being from another place and time that our ancestors have built religious images around? Here, the possibilities are almost endless.

Of course there are also other possibilities, such as fraud, fakery and the downright misidentification of things perfectly boring and earthly. Some skeptics say explanations range from bunches of balloons inadvertently arranged in just the right shape, or unseen tethers and zip lines that seem to move objects through the sky, or even parachutists seen from a great distance.

Any number of these things could account for odd objects in the sky, and the fact that more people than ever have access to digital video recording equipment may simply mean that we’re all aware of odd occurrences more than any time in history.

But what if they are real? These sightings seem so strange, so outlandish, that there’s a part of our minds that simply don’t accept them. Had there been no video footage to accompany the claims surely even many ufologists would dismiss flying humanoids as far too weird for belief. But the footage does exist, and there does seem to be something going on here.

Are they UFOs? Unclassified animals such as the Mothman or Jersey Devil? The angels and demons of legend? Top secret government experiments? Ultimately, we may never know the truth, and until there is concrete proof there will always be skeptics who see balloons where others see flying humanoids.

What Are Unidentified Flying Humanoids?