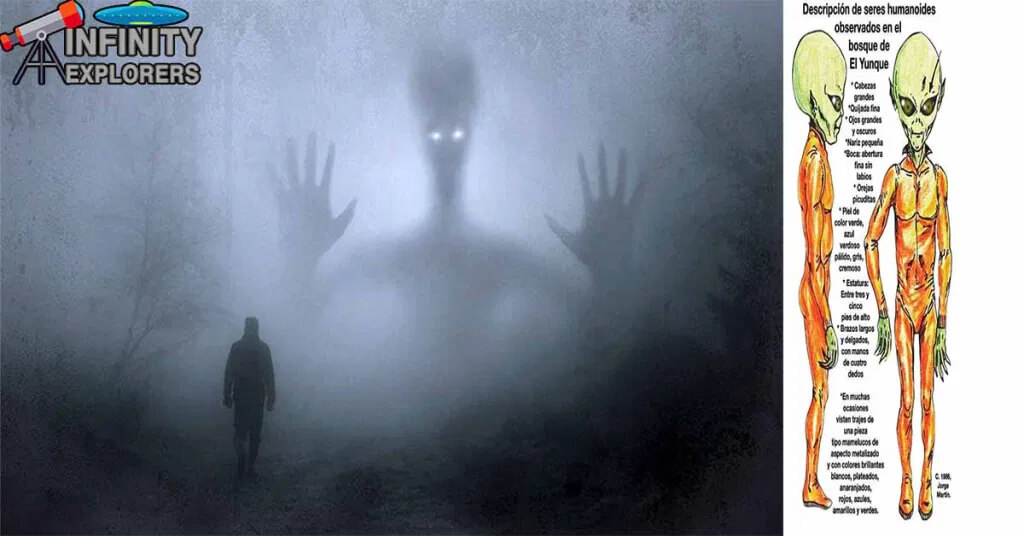 The park is located around two mountains, one of which is also called El Yunque, which means “Anvil”, at 3,540 feet above sea level and is home to an incredibly diverse menagerie of flora and fauna, most of whose animals are found nowhere else on earth. and many of which are endangered.

This scenic spot is very popular with tourists, but it is also a place where reports of UFO sightings, unexplained disappearances, strange creatures wandering among the trees, Chupacabra sightings, cattle mutilations, the location of underground alien bases, and so on come with alarming regularity.

El Yunque National Forest is indeed one of the strangest places in all of Puerto Rico, and one of the most famous mysterious incidents happened here in 1973. In October, a group of nine people came here who dreamed of seeing UFOs, because in those days there were especially intense reports of UFO sightings in this part of Puerto Rico.

In addition, the inhabitants of the villages located near the forest, as in those days, began to complain again that someone mutilates and kills cows and goats. They blamed the notorious Chupacabra for this.

From the very beginning of the journey, its participants began to see something unusual and even surreal. First of all, as they walked past the mountain, they met three people who were descending from the mountain path. The three wore the same clothes and had nearly the same facial features.

It is possible that these were just three twin tourists, but when the participants of the hike greeted them, they did not seem to hear or see them, without uttering a word or raising their eyes, they passed the group and disappeared further along the path.

The group continued on their way and in the evening they set up camp on the side of the mountain, planning not to go to bed at night but watch the sky in the hope of seeing a UFO. It got dark quickly.

Suddenly, people sitting by the fire heard a loud rustle and crackling of branches in the bushes nearby. Since there are no large predators in Puerto Rico and very few large animals in principle, they decided that there might be another tourist in the bushes. They called out to him and did not receive an answer, and then the rustling and crackling subsided and it became very quiet, unusually quiet throughout the forest.

Several hours passed, but they did not see any UFOs and finally decided to disperse to the tents and fall asleep. And then they again heard a loud crack in the bushes, as if there was something large that was trying to get through the bushes to their camp.

Grabbing the lanterns, the members of the group illuminated the bushes and clearly saw five or six humanoid figures among the thickets, in crouching position, trying to surround them. People thought they were other tourists, but when the dark figures came closer, the flashlights illuminated the gray-skinned creatures.

The creatures had elongated ears, like elves, and had long claws on their hands.

The sight of these aliens frightened the group members so badly that several of them tried to escape from the camp. However, they were not allowed to do this, it turned out that the gray humanoids completely surrounded the camp and did not intend to release anyone outside of it.

The leader of the group, Heriberto Ramos, claimed that one of the creatures suddenly stared at him as if inviting him to contact. Ramos took this as a sign that he may want to communicate and therefore he came closer to the being. When he approached, he got a good look at his triangular head and “extraordinary eyes”. Ramos claimed he was able to get close enough to touch the creature with his hand.

The creature stared at him curiously, as if it was as startled by the sight of Ramos. That quiet calmness of his belied the dangerous-looking claws on his gnarled hands. For a moment, Ramos thought that something important was about to happen, that they would begin to communicate, but the creature continued to just look at him and be silent.

Meanwhile, other similar creatures roamed the camp among the surprised and frightened members of Ramos’s squad. Soon one person, either due to stress or under the influence of aliens, suddenly wandered into the forest like a zombie, in a state similar to a trance. Another man ran after him in an attempt to get him back but stopped when he saw a luminous egg-shaped object behind the trees.

This “egg” lay on the ground and it looked like it was the object that lured the person who had gone into the forest. Then other members of the Ramos squad also went into the forest and saw there two humanoids, who were holding another shimmering “egg” in their hands. Later, there were suggestions that the “eggs” were special devices that influenced the state of people and forced them to leave the camp in the forest at the whim of the aliens.

For the rest of the night, the hikers wandered through the woods around the camp in a state similar to or close to a trance. And when the sun rose, the aliens suddenly disappeared, finally leaving the tired and exhausted people alone.

When Ramos and his people came to their senses, they found that the ground around the trees was trampled with strange footprints, as if the creatures that walked here were very heavy. They managed to take several photographs of these footprints, and then they quickly packed up their things and left the forest as soon as possible.

Six months later, in May 1974, explorer Federico Alvarez went to the El Yunque forest along with several students from a local college. He had heard a lot about the aliens that Ramos’s group met here, and he was eager to see something similar too.

When Alvarez and the students were just approaching the forest in their car, they all saw a very tall humanoid figure that crossed the road right in front of their car and disappeared into the bushes. Alvarez immediately braked and then he and the students spent a long time heating through the bushes and forest in an attempt to catch up with this creature.

They found his tracks and walked along with them until the cliff, and then the tracks disappeared as if the creature had disappeared into thin air.

Then Alvarez and his guys set up camp near the observation tower and at night they decided to arrange there something like a homemade alarm from empty aluminum cans.

“And between one-thirty and one forty-five in the morning, the cans rattled,” – said Alvarez.

The students hesitantly descended from the tower’s observation deck and witnessed a disturbing sight: the cans moved by themselves, moved by an invisible force.

Some members of the group felt that things had gone far enough and wanted to leave the place immediately, but they were persuaded to stay for what promised to be another interesting night. And expectations were met. About 15 minutes later, a huge UFO appeared in the sky, floating out of the gap between two adjacent mountains.

The object remained stationary for five minutes in full view of the students before disappearing behind one of the mountains. The unknown ship no longer appeared.

What do you guys think? Leave your comments.