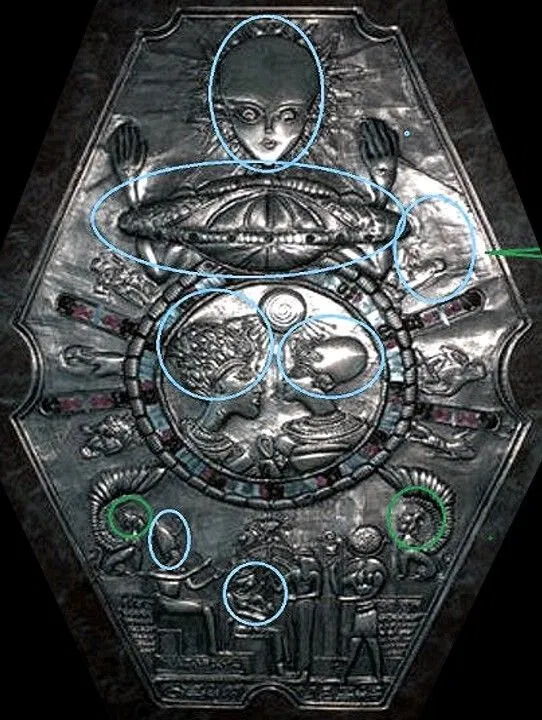 In January 2011, After the revolts that took place in Egypt, many treasures were removed from the Cairo Museum, and among them presumably, this precious medallion of the pharaoh put on sale later on the black market.

The appearance, in 2003, of a medallion that has all the characteristics of having been the main property and a symbol of the power of that pharaoh that possessed it, with unmistakable signs in its engravings, calls for reflection.(medallion of the pharaoh)

If the piece is true and not the product of a conspiracy, on how were the origins of man on Earth, their evolution and the contact they should have with extraterrestrial beings, go to know where they came from and perhaps even had a notable influence on the development of our species.

The discovery of this piece in Egypt, whose studies took many years, marked a characteristic that distinguishes it, for having a very marked signal of what could be considered as a more than close encounter between civilizations, and that would have been made by labor Anunnaki, would corroborate what we were contacted in the past, a reality closer and closer to confirmation.

From that discovery of the paleontologist Steve Winwood, (who 10 years later was accused – and arrested – in Egypt for having violated the forbidden areas where he investigated), everything was plunged into an even more enigmatic fact. Was the piece real? Was it sold on the black market?

Undoubtedly, if there is something that distinguishes this immaculate medallion are some amazing recorded images, which from the moment they came to light have generated suspicion, suspicion, intrigue and a host of other sensations among the Egyptologists and scientists who supposedly studied it. .

There is no doubt that the banner highlights the face of a humanoid, potentially an alien, a sun that is emerging from behind and at the bottom, the indubitable image of a ship shaped like a flying saucer, like those that became popular in the middle of the last century. And to top off the impact of the image, two pharaohs appear receiving the sun’s rays reflected by the alien.

Given the location of the find and some of the inscriptions, Professor Winwood always considered that the medallion could be linked to the times of Atlantis, the lost continent.

In this context, we must consider that the philosopher Plato referred to these issues in his analyzes and writings. And that the age of Pharaoh’s medallion is in line with the times when Atlantis was supposed to have disappeared as a continent.

For the paleontologist, the recorded message was a warning about the end of a galactic cycle. Something that, with the apparent disappearance of the piece, remained in the darkness of the shadows .. What do you think? leave us your comment below.