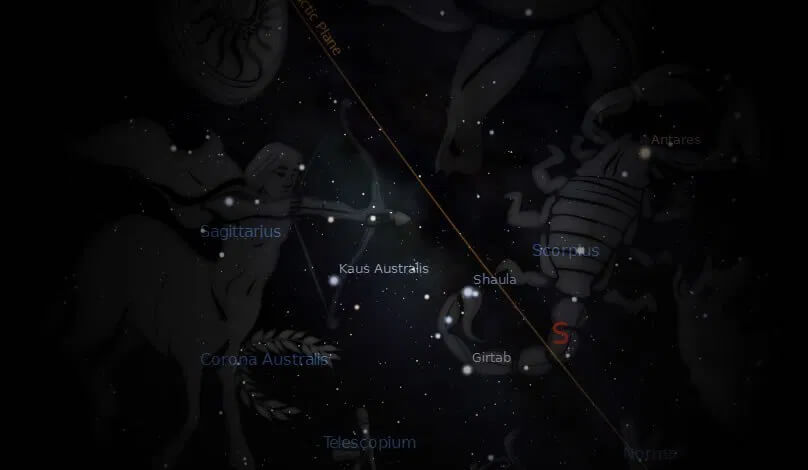 On Friday,  June 14, 2013, a UFO or angel (depending on your school of thought) was filmed entering a star-gate known as the “Golden Gate.”  This anciently revered part of space was universally accepted as the entrance into the Heavens.  All of space is not considered heaven but a specific part which includes the dark rift or also known as the Galactic Plane. Many ancient cultures include this in their sacred texts and legends.

This belief in a gateway to and from heaven has been universally maintained throughout the ages in the writings of poets, philosophers, priests, prophets, monks, magi and mystics. It has also been recorded in the symbols of kings and emperors like the imperial seal of Cyrus the Great and the labarum of Constantine. Even today one of the more popular songs is entitled, Knocking on Heaven’s Door and a common figurative expression is the pearly gates referring the entrance to heaven.

On this particular night, I used Google Sky on my Samsung Galaxy S2, to locate Sagittarius and Scorpio in the night sky.  Using a night-vision monocular patched into a monitor I began to scan the night sky.  The tripod afforded me great stability as I spanned the starry night canopy looking for a UFO.

I made sure to use landmarks aligned to Sagittarius and Scorpio, so I could mark anything headed in their direction. To my surprise, within 15 minutes, I caught a UFO flying high amongst the stars. It was headed toward the Sagittarius and Scorpio constellations. I kept the monocular as steady as possible and tracked the orb across the night sky.

To my astonishment, when it entered between Sagittarius and Scorpio, it began to fade away until it had vanished! I kept the camera trained on the location expecting to see it again. Because it is night-vision, it can see through clouds and I expected to see it again. It never returned and I realized I had just witnessed an UFO entering the “Golden Gate.”

Many people dismiss the ancient civilizations as antiquated or even ignorant and feel our modern civilization is superior. This could not be farther from the truth.  The ancients made sure the “Golden Gate” was known because of its importance and as evidence of the world of God and angels. We are in the midst of the completion of ancient prophecy and we are the witnesses.

These UFO do not land in plain view because they are on spiritual missions and are amongst us now. When they return to their realm they are entering through this “Golden Gate.”  This is truly a spiritual war for our hearts and minds. Hollywood has turned these sightings into fantasy, of alien beings traversing great distances in space, to make crop circles and leave. Hopefully this video, will dispel any Hollywood generated fantasies of little beef jerky colored aliens coming to Earth needing to phone home.

We must begin to ask ourselves if the ancients are correct about the “Golden Gate” then what else are they correct about. How does this impact our civilization? Is there a real war for our souls? We must think outside of the cube and distance ourselves from Hollywood generated propaganda.

When these ships travel through the “Golden Gate” dimension, what do they see? There is a spiritual kingdom just as there is a physical kingdom. We are more than just flesh and blood, as evident by the secrecy of these beings. If we were just food then we would have all been easily consumed by now. We have a greater worth and by proving the ancients right, we should invest into our spiritual selves instead of an iPad.

There is an agenda unfolding dictated from the spiritual realm and the fruit of this agenda is self evident upon the earth. There has been a moral decline across the world and this is by design. Hopefully, this video will spawn more questions and inevitably a return to spiritual teachings, applied to our relationships.