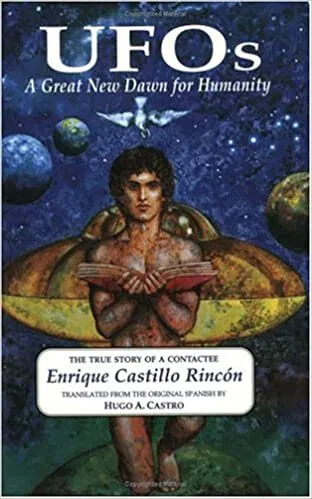 The story of Enrique Castillo Rincón contains so detailed information about the contact with extraterrestrials that it is considered to be the best-documented case of the Ufology from South America. The series of strange incidents in Castillo’s life began after he spotted the UFO over the Irazu volcano, Costa Rica. Later, he met with intelligent beings from outer space and even boarded their spacecraft.

Enrique Castillo, an electrical engineer was born in 1931 in San José, Costa Rica. He spent most of his life in Costa Rica before moving to Colombia. His first encounter with the UFOs happened in June 1963, while he was working for the power utility company in Costa Rica near the Irazu volcano.

In his book “Ufos: A Great New Dawn for Humanity,” he wrote that he had seen two orange objects in the sky along with two colleagues. Three of them felt uncomfortable sensations in their bodies during the incident. The objects were flying in a strange maneuver. Castillo added that one of the UFOs changed its color, and the other emitted purple light. After few minutes, they disappeared into the sky at the high speed. At first, the witnesses remained silent and did not tell anyone about their experience but a few hours after they encountered the UFOs, all of them suffered health problems. They went to the hospital as it felt like they had been exposed to radiation.

A few months after the incident, one night, Castillo heard strange noises in his head, the same which he heard during his first UFO encounter. Interestingly, that time, his wife Beatriz also heard them. He also founded a UFO group to learn more about the encounters.

For the next five years, no strange happening occurred to Castillo until he moved to Brasilia in 1968 for work. He wrote that one day, while driving from Sao Paulo to Brasilia, an orange ball of light was flying over his car for a long distance, and he felt intense vibrations in his car, there were radio problems, and he even had problems with the steering.

The serious odd events with Castillo began in 1969. He arrived in Caracas, Venezuela, to install telecommunications networks. One afternoon, he decided to watch a sci-fiction film “Barbarella” in a theater in his free time. While he was in a queue to buy a ticket for the film, a stranger from Switzerland introduced himself as “Cyril Weiss” and asked Castillo if he could join him to watch the film together. Castillo agreed and after the film was over, both walked to Weiss hotel. The Swiss man then invited Castillo to visit his hotel the next day.

Both men talked about different things during their next meeting. After several meetings, Castillo started noticing a strangeness in Weiss’s behavior. According to Castillo, being Swiss, he could speak Spanish without any accent. Besides, Weiss told him that he believed in the existence of extraterrestrials

, and they live on Earth in some secret places not inhabited by humans. After spending a lot of time with Weiss, he told Castillo that he would go abroad for a long time but would meet him again.

After a few years, Castillo settled in Bogota, Colombia. One day, he received a call from Mexico where a woman named Karen requested him to meet her. Daiyaini, one of Castillo’s daughters, commented that the woman told her father that she was contacted by extraterrestrial beings. Even though Castillo thought it was some kind of a joke, he decided to meet her.

Karen told him that she had been contacted by the Pleiades, they gave her information about the planet. She also said that they were looking for more people to contact them, one of them was Castillo. Later, he would contact the people who guided him on how to contact the beings who would communicate telepathically.

One day, Castillo was at home and suddenly heard a disturbing noise in his head as it was during his first UFO encounter. According to Daiyani, beings kept communicating with her father during his meditations and showed him the Pleiades (one of the star clusters closest to Earth) from where they belonged. What’s more, they told him about the upcoming physical contact that was set on Saturday, November 3, 1973.

Before his meeting, he was given the place and time where he would have the first contact. He was told to go to a lake located north of Bogotá and find a sphere covered by a stone near the roots of a tree. As he lifted the stone, two UFOs appeared and he was taken into the spacecraft by two figures in grey uniforms. At first, Castillo resisted boarding the ship, but a voice in his head said not to worry.

In the ship, he again met Cyril Weiss who disguised himself as a Swiss man before. Weiss, whose real name was Krishnamerck, took him to a room where there were other beings similar to Nordic aliens.

He was told by the Pleiadians that they had been on Earth for thousands of years before Christ, living on secret bases. They have been actively influencing our technological development and also mingled with humans. He remained in contact with the Pleiadians until January 1975. He even claimed to have visited their bases where he saw humans and the Pleiadians working together. They showed him a submarine base in the Mariana Trench. He was also warned by their masters about future disasters.

Castillo visited the United States and Germany, sharing his experiences and also helping other contactees. He was also taken to Washington DC by the US embassy agents where he was interrogated and even went under hypnotic regression, but it was willingly as he wanted to prove his authenticity.

Though his story shared similar details as other famous contactees like George Adamski, Howard Menger, and Daniel Fry, some researchers and experts found it hard to believe him. But on carefully examining his case, Castillo cannot be called a hoaxer. The E.T.s gave him scientific, spiritual, prophetic, esoteric, and technological knowledge that includes reverse-engineering operations and mind-guided spaceships. He died in 2013, at the age of 82 in Colombia.