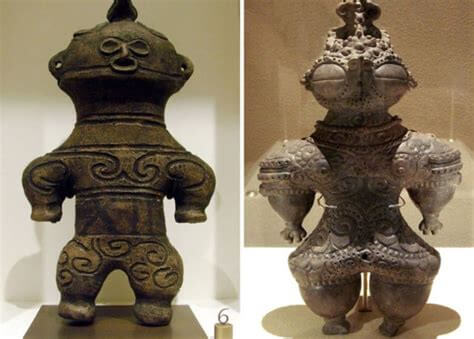 The Dogu statues crafted by the Jomon people of Japan and dated to about 5000 BC have an oddly mechanical appearance. They tend to have large faces, small arms, and hands, and compact bodies. Some appear to wear goggles or have “heart-shaped” faces. Most have marks on the face, chest and shoulders, which suggest tattooing and probable incision with bamboo. Dogu first appeared in early Jomon but began to flourish in Middle Jomon through Late Jomon and were found all over Japan with northern Japan, the Tohoku region, yielding the most variety. Archaeologists are baffled by these statues because they resemble no other objects on earth. As for Jomon pottery, Dogu has various styles by exhumation area and generation. According to the National Museum of Japanese History, the total number found throughout Japan is approximately 15,000. Most of the Dogu have been found in East Japan and it is rare to find one in West Japan. Now they can be found in the Japan Archaeological Collection of Tohoku University, Sendai and several museum in Japan.