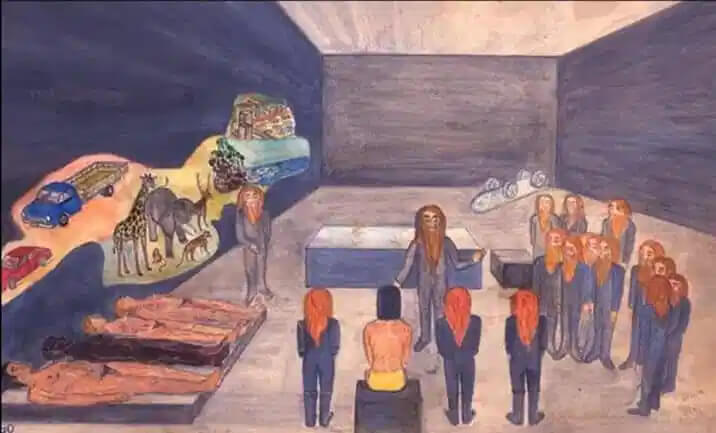 A Brazilian soldier never thought that a normal fishing day for him would turn into a horrific incident of a lifetime. His story tells a bizarre encounter with humanoid-like figures who offered him a job to collect information on Earth and spend time in their world.

Jose Antonio Da Silva was off-duty when he planned to go on fishing on May 3, 1969. He took a bus and reached a lake in Bebedouro, Matozinhos, Brazil. He set his camp as it got dark and went to sleep. The man woke up the following day and started fishing. He felt very calm, fishing for a while when at around 3 p.m., he noticed some movement in bushes behind him. At first, Da Silva assumed that it was an animal but then, he heard some whispering. He dared to check who those creatures were, and all of a sudden, he was struck by a light beam coming from behind the bushes that made him paralyzed.

Da Silva was on the ground when two 4-feet tall human-like figures creeped him out, grabbed him by arms, and dragged him to a massive cylindrical-shaped craft where he saw one more creature of their kind. He could not see their faces as they were in grey helmets with their masks on.

Then, he was taken into a ship where he found himself in a brightly lit room with a chair in its center. He noticed that the room had a dark grey floor and could not locate the source of light. The ship was ready to lift off, the humanoids put a helmet on his head, similar to theirs, and sat on a bench near the door. During the flight, he could hear their conversation in an unknown language which, according to Da Silva, sounded aggressive.

The journey was not comfortable for Da Silva as he could not breathe well there, the brightness in the room hurt his eyes and because of the helmet, he felt pain in his neck. Finally, after some time, the ship landed and he was taken to a larger room. He was surprised to see several of them who in every way looked like humans. They had long red hair that reached up to their waists, very thick eyebrows, oversized green eyes, and mouths wider than humans’. He also noticed that they were toothless and had pointed noses.

The head of the group approached Da Silva and tried to talk to him using gestures. He drew the illustration to show him that they meant no harm to him. Meanwhile, he was offered food by the aliens, and after having it, he felt much better. Moreover, he saw several human corpses, lying on a stone shelf, and there were some pictures of animals on the walls (such as jaguar, monkey, elephant, giraffes), as well as cities, houses, cars, aircraft, etc.

Da Silva understood from the drawing of the head of the humanoids that he was offered some deal. He was asked to spend three years on Earth, collecting some specimens and information for them, and then spend seven years with them in their world. After that, he would be returned to Earth. He rejected their offer, which made the aliens angry. Then Da Silva thought about those dead bodies and prayed by touching a crucifix around his neck. The head got irritated with it, snatched the crucifix, and put it into his pocket.

In some time, Da Silva was taken to a craft, blindfolded. Then everything went dark. He was in a semi-conscious state when he found that he was dragged out of the craft and dumped by the aliens in a forest. When the dawn hit, he regained his consciousness, found himself 200 miles from the location where he had been kidnapped. Later, he noticed that he had a beard, which meant that he was gone for four days. Somehow, he managed to find the road to a town and shared his story with one guard who found him in a poor condition. His story was thoroughly covered by the media but still, the mystery remains unsolved.