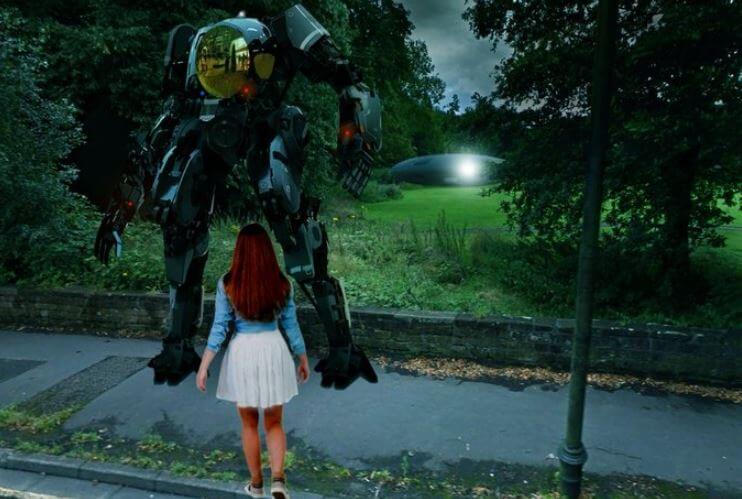 On the Wednesday evening of 5 May 1982, a 13-year-old girl named Rose Robson-Hilbert was returning from her friend’s house on Woolton Hill Road and was heading to her home on Lee Park Avenue.

The time was around 10.30 pm. As Rose walked up Belle Vale Road, she saw a woman who looked as if she’d stepped out of some Disney fairy tale, on the other side of the road, in front of the recreation ground.

The woman was tall, about six feet in height, and she had long golden hair, a pretty face with huge eyes and vivid red lips, and she wore a long sparkly pink dress that went down to the ground.

This oddly-dressed woman was smiling and beckoning Rose, who was initially wary of the woman, but as she looked at her, the girl felt very calm and suddenly had an urge to see what the lady wanted.

She crossed the road and felt as if she was walking in a dream. At that moment, Rose’s father was driving up Belle Vale Road on his way to work (at a factory in Speke) when he saw his daughter and beeped the horn of the car.

That beep snapped some hypnotic spell and brought the girl back to reality, and what she now saw was not a beautiful fairy princess but a sinister shadowy robot of some sort, about 9 feet in height – beckoning her with its gigantic metal arms.

Just to the right of the mechanical monstrosity was a landed saucer-shaped craft with a bright light in its center. It was as if a UFO had landed in the recreation ground. Rose screamed and ran from the robot and heard its thudding feet following her.

When Rose reached home she told her mother what had happened and although the girl’s mum thought she had seen a shadow or something natural that had perhaps been magnified by the girl’s fear of walking home late on her own, Rose’s father said he had seen something in the recreation ground with a bright light on it as he had passed his daughter on the way to work.

Stranger still, after that encounter with the towering robotic figure, Rose lost her stammer for good. At the time of the alleged encounter a UFO had been seen hovering over Lee Park Golf Course.

In November of that year, there were more reports of the “Gateacre Robot” prowling around the same recreation ground on Belle Vale Road and it was also seen near Craighurst Primary School around midnight by a passing motorist.

Six former’s at Gateacre Comprehensive were featured in the Liverpool Echo that month after they built a small robotic device on caterpillar tracks that could pick up a cube for a science competition sponsored by BP, and there were unrealistic suggestions that someone local had built the robot that was being seen in the area, but the one seen by Rose and other witnesses was 9 feet in height and was not something the size of a remote-controlled racing car on caterpillar tracks.

The case remains a baffling mystery.