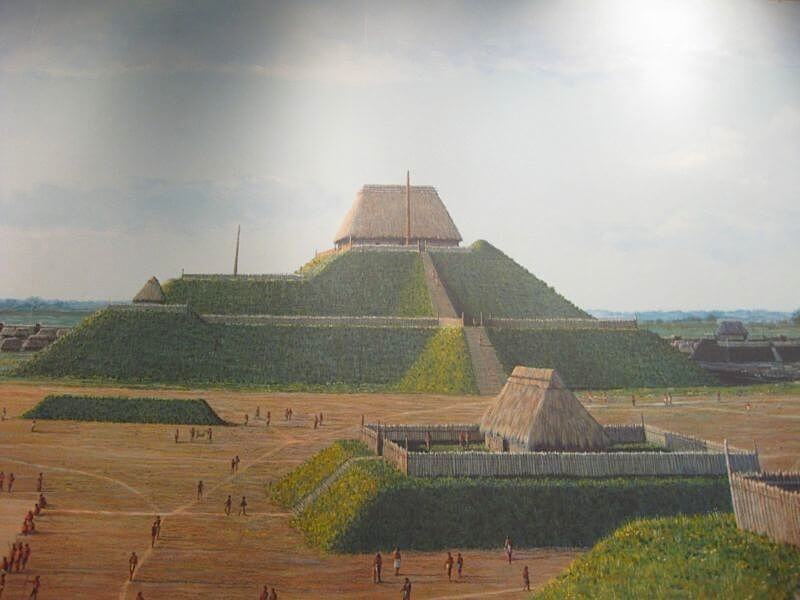 When you think pyramids, you think of Egypt or Mexico — not Illinois. But just eight miles east of the Gateway Arch is what archaeologists believe to be the ancient city of Cahokia. This is not new — 40 years ago the state of Illinois declared Cahokia a historic site — but we thought it was time for a revival of this amazing World Heritage site (and one of only ten cultural heritage sites in the country).

The ancient city of Cahokia was settled circa 600 AD, by 1250 was a bigger city than London, and then seemed to crumble into ruins quite rapidly around 1400. What is interesting to us is that the these inhabitants, like so many primitive people, were able to construct huge buildings and monuments without all the equipment and tools that we have today. These buildings were built by hand.

They built a huge community that covered 6 square miles for a population of up to 30,000 people, and included a thousand thatched-roof houses, 120 earthen mounds, and a dozen pyramids. If you were traveling down the Mississippi River, you would have seen these pyramids and temples at quite a distance. Despite that this civilization had no written language, they were accomplished architects and construction workers who built a variety of structures like houses, temples, meeting halls and public works.

This ancient city included 51 platform, ridgetop and conical mounds across residential, public and ceremonial areas. Mound cities in North America date at least a millennia before Cahokia, making them older even than the Egyptian pyramids. Archaeologists also discovered remnants of what they call “Woodhenge” (similar to Britain’s “Stonehenge”), a circle of holes left by wooden posts, arranged in a way that marked the solstices and equinoxes.

The tallest of these buildings is called Monks Mound, the largest prehistoric earthen structure in North America. This and all buildings were all built by hand, one “basket-load at a time,” carried on their backs.

Monks Mound is 1,000 feet long, 800 feet wide, 10 stories high and has four terraces. It was built using about 22 million cubic feet of earth and took about 300 years to construct the entire city. This structure and the “downtown” area was enclosed by a stockade with guard towers that was 2 miles long. At intervals of 70 feet was a guard tower, and each of these structures was made from 20,000 logs.

Explore this area via the Cahokia Mounds State Historic Site, which has special events, craft classes, lecture series, tours and other programs. Cahokia Mounds is located just outside of Collinsville, Illinois, which is close to Interstates 55/70 and 255, along Route 40. The highway runs through the center of the area separating Monk’s Mound from the Interpretive Center.