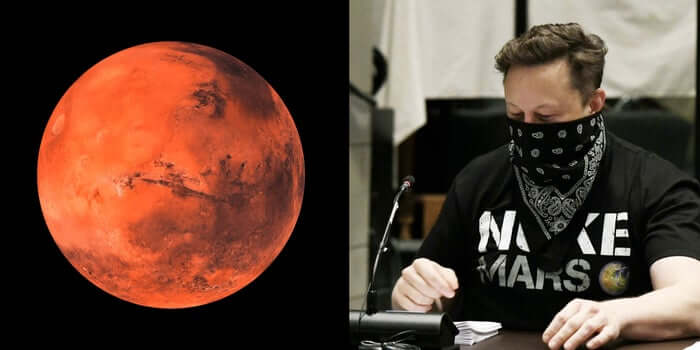 May 6, 2021
This article was translated from our Spanish edition using AI technologies. Errors may exist due to this process.

Do you believe in destiny? Sometimes, it seems like things are predestined.

Elon Musk, the CEO and co-founder of private space exploration company SpaceX, announced last October that his company hoped to send a manned spacecraft to Mars in 2024.

The Red Planet has been a part of Musk’s dreams for a long time, given that Musk himself has argued that the only salvation for life on Earth lies in achieving space colonization. The SpaceX CEO has even said that he wants to be buried on Mars.

It seems strange then that Musk’s ambitions were seemingly prophesied by someone back in the 1950s. At the end of last year, the serial entrepreneur tweeted, “Destiny, destiny. There is no escape for me.” What’s interesting is the response Twitter user Toby Li gave him.

“Speaking about destiny, did you know that Von Bran’s 1953 book ‘Mars Project,’ referenced a person named Elon that would bring humans to Mars? Pretty nuts,” Li wrote back.

As Gizmodo notes, Li was referencing the book Mars Project: A Technical Tale (Das Marsprojekt) by German-American rocket physicist, astronautical engineer and space architect Wernher Von Braun. The scientist was one of the main developers of Nazi Germany’s V-2 rocket at the end of World War II (although his association with Adolf Hitler has been controversial). Following the war, Von Braun emigrated to the United States, where he helped craft the country’s space exploration agenda and, eventually, NASA.

In his science-fiction book, Von Braun talks about what a trip to Mars in the middle of the Cold War would supposedly have been like. He envisioned that human colonists on Mars would be led by a person called “Elon.” However, as another Twitter user mentioned last year, “Elon” was not the name of the leader of the Martian community in Von Braun’s book, but rather a title.

Therefore, chances are that the connection between Von Braun’s novel and the founder of SpaceX is purely coincidental. Still, it is certainly interesting to imagine that some people are born with a written destiny — especially if we consider that Musk recently called himself the emperor of Mars.