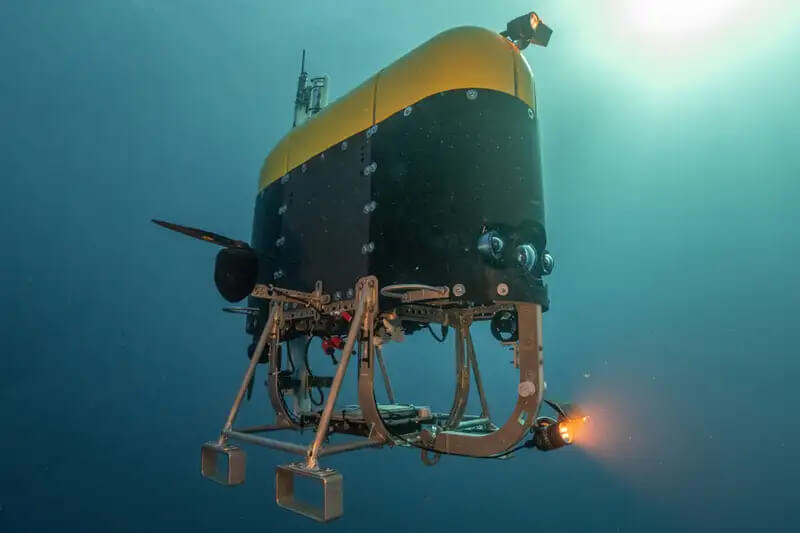 A stealthy autonomous underwater robot that can track elusive underwater creatures without disturbing them could help us better understand the largest daily migration of life on Earth.

Mesobot, a 250-kilogram robot that operates either unconnected to a power source or tethered with a lightweight fiber-optic cable, is able to move around below the surface unobtrusively.

The ocean’s twilight zone – known more formally as the mesopelagic zone – lies between about 200 meters and 1 kilometer in depth. It is the site of the diel vertical migration (DVM), a daily phenomenon during which deep-dwelling animals come closer to the surface to feed on the more plentiful food supplies found there, while dodging predators.

The DVM is seen by biologists as a very important way in which nutrients – and carbon dioxide captured via photosynthesis – can be rapidly transported to depth, where carbon can be stored for the long term. But studying the creatures involved in the DVM is tricky, because they often flee from anything that disturbs the water, or from light.

“All of the mechanisms that we think would frighten the animals, we looked to minimize,” says Dana Yoerger at Woods Hole Oceanographic Institution in Massachusetts, who developed Mesobot – which uses low-powered thrusters – with his colleagues. “We made something that doesn’t disturb the water, doesn’t have bright lights, and doesn’t make a lot of noise.”

Using its attached red-light camera, Mesobot is able to get close enough to sea creatures without disturbing them, and can then monitor their movements over a prolonged period of time. “We’re trying to understand the daily life of these animals,” says Yoerger.

In California’s Monterey Bay, Mesobot was able to dive to a depth of 200 meters and film Solmissus, or “dinner plate” jellyfish as well as giant larvaceans, which are filter feeders that look like a translucent pair of lungs. The robot tracked the jellyfish for 4 minutes, and a larvacean for upwards of 40 minutes, before it had to return to port. Based on power usage in these live missions, the team thinks Mesobot can track for a day without issues.

“This is super exciting, from both an application and a robotics perspective,” says Nick Hawes at the University of Oxford. “Understanding our oceans will play a key role in our future sustainability goals. Their vastness and inhospitably to humans means that our only solutions for large-scale, systematic investigations will have to involve robots in some way.”

Yoerger hopes to deploy Mesobot for longer missions that will provide us with more information on the activity in the twilight zone.