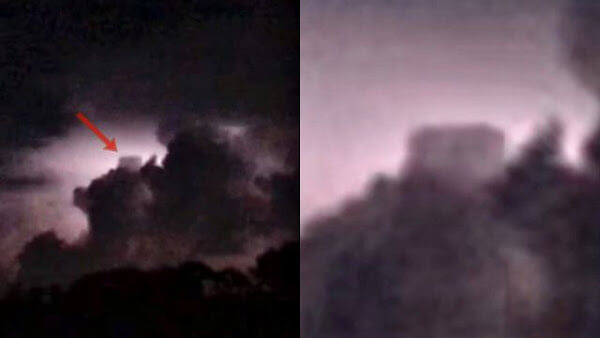 BEHIND THE SCENES
During a silent lightning storm over Vineland, New York a strange cube shaped anomaly appears in the clouds. The strange apparition raises many questions and some suggest it is an atmospheric refraction or an optical phenomenon like a mirage but others say that is a Blue Beam test, using a holographic technology or it is a temporarily vortex of a possible parallel universe. A Mirage or Fata Morgana distorts objects in the distance like the mysterious city floating In the clouds over Foshan Guangdong, China or the ghostly Hogwarts-style castle above Jinan, Shandong Province, China (See next two images) – But that does not apply to this anomaly since it appears at night during a lightning storm and there are no objects or tall buildings in the distance visible. So, what could it be, a rare atmospheric refraction or it has something to do with a holographic display or a parallel universe?