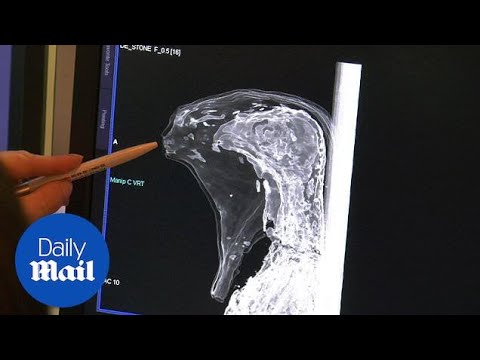 Daily Mail
Sept. 25, 2020
The 3,000-year-old mummy was one of two sent for a CT scan at Rambam Hospital in Haifa, Israel, by the city’s National Maritime Museum. What they discovered was a mummy made of plant matter, apparently meant to represent Osiris, the ancient Egyptian lord of the underworld and god of the dead.

An incredible discovery was made recently as the two mummies that were discovered decades ago were only now found to have harbored quite the shocking reveal, to say the least.

They were originally believed to contain human remains, but with time it was discovered that one was a bird of some kind that had been mummified while the other was that of a little child.

For the past decades or so the two had been showcased at the National Maritime Museum’s collection only to discover an incredible fact while scanning the two at the Rambam Hospital from Israel.

It turns out that the 3,000-year-old mummy of a little boy is not human after all either, but that it is actually a hand-crafted plant matter doll after all.

Now, who actually mummified them and for what reason were they the only ones mummified like this in the first place we cannot tell you for sure as we don’t know, but what we do know is that in ancient Egypt cats, crocodiles, fish and more were often times mummified as offerings to their deities so this didn’t necessarily surprise the team.

However, birds were believed to be protectors of the soul, as they are meant to represent Horus, a good deity, so the team still cannot wrap their heads around this strangeness.