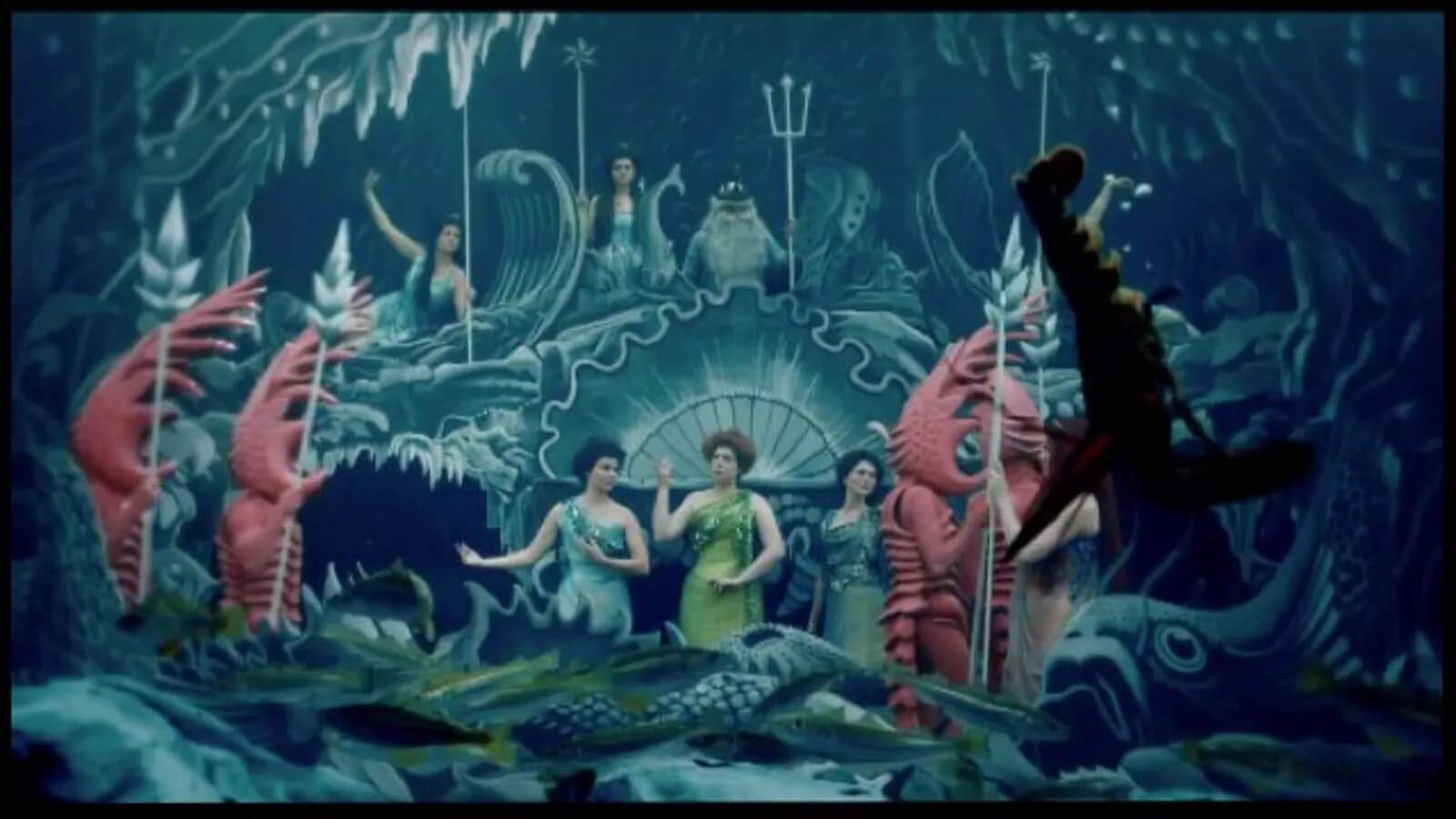 You could argue that every second spent discussing humans colonizing the solar system is a second not spent salvaging what we have here on Earth and is thereby a concession to nihilism, laziness, and the worst, most craven elements of our public life. But what about living the sea? Same deal, I suppose, but still, it’s fun to think about—and with no Musk-figure lobbying for it, it somehow seems more wholesome, at least as a thought experiment. Which is why, for this week’s, was surveyed a number of experts on the question of whether underwater living might ever be possible.

This can be broken down into three parts—technical, motivational, and financial.

The answer to whether we can technically live under the sea is a definite YES, and in fact, Jacques Cousteau and a team of fellow aquanauts lived undersea in Conshelf I, II and III in the early 1960’s. The U.S. Navy had a similar program of undersea habitats in the mid-late 1960’s named Sealab, and, in 1970, the Tektite habitat hosted the first all-female aquanaut team. In 1993, the Aquarius Reef Base was deployed on the ocean floor at 20 meters depth next to a deep coral reef and is still used to this day, including by NASA, who uses it to simulate human space exploration missions. Unlike today’s nuclear submarines that are self-contained and can remain submerged for many months, all these habitats and the few current long-duration ones require extensive and continuous support from surface ships, barges, or land-based umbilical systems.

Sustainability aside, the engineering challenges to building large habitats or even cities under the sea are probably well within our grasp. However, the motivation and the significant funding that they would require have never materialized. In contrast, the current International Space Station has cost more than $100 billion dollars to build, and NASA spends $3 billion to $4 billion dollars per year to operate a facility that can support just six astronauts. For many reasons, the oceans have never had that kind of sustained public or political support. Perhaps the prospect of ever-rising sea levels and the population pressure will ultimately provide the necessary motivation for coastal communities to switch from trying to fight and hold back the rising tide to embracing it, and to begin to think about ways to adapt, which might one day include cities beneath the waves.

Like outer space, the undersea world is an alien place for humans to live. Surprisingly, journeying into the depths of the oceans is in many ways even more challenging than voyaging into space, because of the tremendous pressures that are found as you descend into the ocean. At sea level, the air that surrounds us presses down on our bodies at 14.7 pounds per square inch, also known as one atmosphere. The deeper in the ocean you go, the greater the pressure that you feel. For every 33 feet (10.06 meters) that you go down, the pressure increases by one atmosphere, which means that at the deepest point in the ocean (the Mariana Trench, approximately 36,000 feet [11,000 meters]) the pressure is more than 16,000 pounds per square inch, or the equivalent of one person trying to support 50 jumbo jets. In the vacuum of space, difference in pressure between what we feel on the surface of the earth is only one atmosphere. That is why, although sufficiently braced, the walls of the Lunar Excursion Module that Neil Armstrong and Buzz Aldrin landed on the Moon were no thicker than a standard soda can.

“Like outer space, the undersea world is an alien place for humans to live.”

British designer and futurist known for his work on underwater habitats

I absolutely feel it’s the way forward, especially given our current situation. And if we put money into it, it’s absolutely possible.

You’d need regular supplies of food, air for life support systems, water, etc. But the key goal for any sort of human habitation in an alien environment is self-sustainability. Obviously, there are energy issues, and cultivating food would be a challenge. We should, at this very moment, be developing and testing and prototyping in our oceans and seas.

Shallow-depth would be the obvious starting point—furthering the work of Cousteau and Ian Koblick. Certainly, if we intend to colonize other planets, it’s imperative that we start developing and honing these technologies here on Earth.

My Sub-Biosphere project was conceived as an extension of the initial Biosphere. That latter project unfortunately devolved into something like a reality show, but the ideas behind it were first-rate. From my perspective, the only thing that can or will survive a future meteor strike, nuclear war, or even-more-lethal global pandemic would be a self-sustainable underwater environment which is protected from any of those outside forces.

Of course, there are ethical issues. People always ask me: how many people can you fit in it? How would you determine who’d go in? How would it be regulated, who would be selected? Would it be a lottery system? The whole concept brings up more questions than it answers, but it’s still a hugely valid avenue of inquiry for the human race, especially at this moment.

I have been scuba diving since I was 4. For me, the ocean is home. I feel more at home in the ocean than I do on land, and for many reasons. Simply for the beauty of it; for the “wow” factor of the alien world, and for the pragmatic reason of being able to answer questions that we simply don’t have answers to.

The underwater world is much like space. So much remains to be explored (over 95% of it) and the conditions are harsh. It takes a lot of mental toughness and training to live underwater. It is not for everyone. In fact, astronauts train and live underwater before going to space. Many frequent the underwater habitat Aquarius in Florida; in 2014, I spent 31 days there, as part of Mission 31, leading a team of six aquanauts.

Today I’m creating Proteus—essentially the ISS of the Sea—with my team. It will be for a selection of visitors in the coming years and will allow us to progress our knowledge of not only life underwater, but also on land. Ocean health is human health and vice-versa.

Proteus will be at least seven times the size of any other previous habitat in history, allowing for much longer stays and complex studies. With a habitat like Proteus, there will be WiFi at the bottom of the sea, allowing us to reach millions of people on land and strengthen that human-ocean connection. What it comes down to is creating better access to the underwater world and educating others about it, so that we can all live a better life on land.

“Whatever the size or nature of this habitation, I would hope we would approach it with a thoughtful, international agreement to sustainably create and manage these habitats.”

Living underwater sounds like an exciting adventure, though it may be a disconcerting idea, if done in a way that harms underwater habitats.

I don’t think it would be difficult to furbish underwater habitations. In fact at least one research facility already exists in the Florida Keys.

The key would be where on the scale of independence you’d like to see this underwater habitat. Tethered to the surface and supplied with resources or independent living arrangements? For the latter, oxygen and drinkable water as well as food would be essential. Those could be extractable from the surrounding water. If sunlight or artificial light is available, you could also grow some things, and I can imagine ways to supply the unit with energy (e.g. tidal action and currents).

Cities would be a problem of scale. Existing technology can support small units of maybe a few dozen people. Cities make me think theaters, and restaurants, and transportation. Depth would be important in terms of pressure, but you could acclimate people to higher pressure slowly, up to a point.

In short, if we want to do it, it could be done, certainly on a modest scale in shallower (<100 meter) water. Whatever the size or nature of this habitation, I would hope we would approach it with a thoughtful, international agreement to sustainably create and manage these habitats. The oceans make life on Earth habitable, they provide oxygen, redistribute heat around the globe, are critical to climate and provide protein sources for many people. The oceans thus may be refugee for generations to come—it’s best that we treat them as the precious, irreplaceable, resource they are.