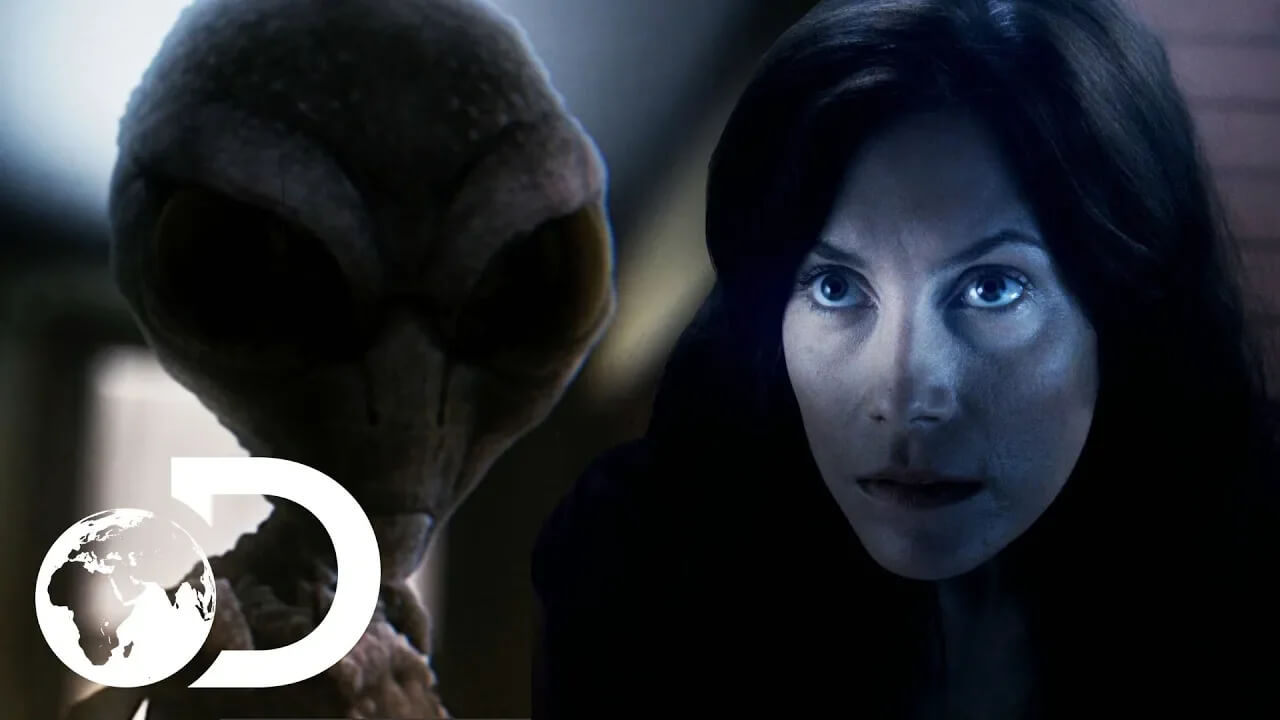 There are thousands of UFO sightings records, but Corina Saebels’ UFO encounters are probably the most intriguing and controversial cases in UFO history. Whatever happened on two summer nights of 1991 & 2003, she was definitely not the only person who witnessed a football field-sized UFO and three green lights in a triangular formation that were chasing her.

She had divorced her husband and wanted to find a calm and safe place to live with her children. Fortunately, she found a beautiful place in Aldergrove, British Columbia. On July 17, 1991, her friend visited her home, and her children were already asleep. It was a warm summer night, and they both decided to go out on the back patio to have some fresh air and enjoy the beautiful starry night sky.

They were having some tea, and her friend was about to propose to her when suddenly everything went silent, frogs stopped croaking and a bizarre boomerang-shaped spaceship caught Saebels’ attention. She told her friend to look up. A football-sized UFO was hovering over her house without making any sound. Interestingly, the ship was all dark, not a single source of light was coming from it. She could only distinguish its shape when it blocked the stars. She felt claustrophobic and thought it would come down. Her friend could not handle the situation and went inside.

Saebels was sure that she stayed there for 2 or 3 minutes looking at that UFO, but when her friend returned, he said she had been missing for almost an hour. She could not believe it and argued with him that she was literally there, watching the spaceship. “I said I was outside just for a few minutes and he said no, you were gone over 45 minutes. I said that’s impossible.”

This incident shocked her friend so much that he never returned to her. So, her only friend who had seen this boomerang-shaped and football-sized spaceship left her, and she had no idea with whom to discuss this case. At first, she was afraid of being ridiculed by people, the next day she contacted the planetarium in Vancouver and asked if they received calls about the sighting, but they forwarded her case to the UFO reporting center in British Columbia.

Nobody would have believed her if she had been the only witness, but there were 15 others who had seen similar objects that night floating in the sky, according to the investigators at UFO center, BC.

Canadian astrophysics Jaymie Matthews, who is also in charge of Canada’s first scientific satellite (MOST telescope) said: “If we have visitors, they’re not coming from another place in our three-dimensional spatial universe. Maybe they’re coming from another set of dimensions within a much larger multiverse. There could be many dimensions of space and time at which our three spatial dimensions and our one temporal dimension are just a subset of them. But if you’re going to connect across dimensions you need to somehow tear a hole in the geometries if creatures have found a way to do this then they have developed a very sophisticated technology if it’s happening by accident they found some natural phenomena that we have not yet encountered.”

As it was already confirmed by other similar sightings that night, Saebels got curious about what had happened with her in those 45 minutes. This made her recall an incident from her childhood. In October 1969, she reportedly went out with her friends to a forest to play hide & seek. Soon, she realized that everything became so silent and she could not find her friends. She felt that something was following her. Without thinking, she started running to her home but could not understand what happened because when she reached her parents, they were worried as she was out for a long time.

As in the cases of abduction, the abductee always returns with unusual marks on his body, and so Saebels did. She visited a doctor but there was no explanation how she had got it. For the next few days, she tried to relax her mind from the UFO event but then at one night, she woke up and saw a being (Grey) in her house. She thought it was just a nightmare but after discovering her daughter painting the same being, she understood that something wrong was going on in her house. Her daughter drew two alien figures, and one of them had a pumpkin head whom the daughter called a “doctor.” This triggered her memories and she recalled what had happened that night in Aldergrove.

The ship hovered over her and suddenly, she was taken inside the ship. She found herself tied up in a big room on a table. A grey alien-like figure with large black almond-shaped eyes approached her and telepathically introduced himself as a doctor. After that, she went into sorts of medical examinations.

Dr. David Jacobs, who spent 25 years studying the events of the abduction said: “a person is taken out of their normal environment, they’re then placed on this table and they have an examination of sorts and I say of sorts because it’s not a normal kind of examination routinely sperm is taken and eggs are harvested.”

The next memory Saebels recalled from her abduction event was finding herself in a room full of human fetuses. She said that those aliens were producing human hybrids by impregnating women and then removing fetuses from them. She always had female-type problems, and her mother also had. Sometimes, they felt like being pregnant, although they were not. What’s more, doctors had never found any sign of pregnancy.

Saebels was anxious about her daughter and was going to protect her from aliens. In a search of a safe place, she decided to move to Okanagan valley with her family. She spent 12 years in real peace in Okanagan until 2003.

On July 27, 2003, she and her friend from Vancouver were returning home at midnight, when they suddenly made a plan for stargazing. She pulled over her car near a forest, and they started enjoying the clear dark sky full of stars. Suddenly, her friend noticed three green lights in a triangle shape. Saebels also noticed something watching them from the other side road. As she lit her torch, they were approached by grey aliens. They ran to a car and quickly drove away from that place. Again, she experienced a time loss along with her friend.

She contacted a ufologist Brian Mike and told him about the incident. It turned out that there were 200 more eyewitnesses of the same event. She tried hard to protect her family from the aliens but could not. She said: “we’re not sure why they keep coming back but they do come back always.”