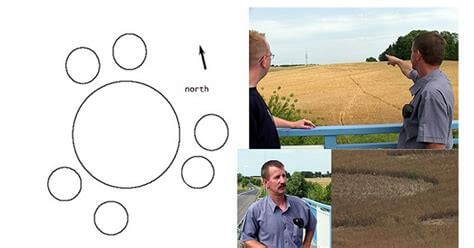 An account of a close encounter of the third kind comes to us from Poland. The incident occurred on August 11, 2003.

Lech Chacinski was driving down the road in the early morning hours, about 5:00 AM, when he saw three figures standing on the shoulder of the road.

Oddly, they were standing in a triangular formation. They wore uniforms similar to that of an astronaut. The encounter was near the small city of Szczecinek, and its roads, as usual, were deserted during the wee hours of the morning.

Enthralled with the three strange beings, he slowed down to see if his eyes were deceiving him. When he got a closer look, he immediately knew they were not astronauts.The three moved toward the front of his car in the same triangular pattern. The closest being to him raised one arm as a signal for him to come to a complete stop.

Chacinski states that “something” had told him to stop, though he heard no voice. Feeling almost frozen, he raised the driver side window as the beings moved toward him.

On top of the helmet, there was something that Chacinski thought to be a communications device.

As the full realization of what he was seeing overcame him, Chacinski wanted to run away, but before he could, he saw a strong beam of light come from the top of the one of the beings helment, which he associated with the question: “Do you hear us?”

To this, the frightened man answered in his mind, “YES!” He was prompted to exit his vehicle, and asked what type of material his car was made of.

He was now able to see all of the beings uniform. The spacesuit was bluish in color; the shoes had a metallic look; and on the chest of the alien was a rectangular electronic device with lights moving. The beings asked Chacinski other questions also, like:

What kind of material are your clothes made of?
How does your vehicle work?
What kind of fuel does it use?

He answered their questions, telepathically, and they told him they had come to deliver a message to the inhabitants of Earth, and this message was given only to him.

We should care about our planet; our water and air. If we neglect our environment, they will cause our destruction.

Finally, Chacinski asked one question of the alien beings, which he was able to convey telepathically. “Where do you come from?”

While Chacinski stood in awe, the three moved up into the air about six feet, and flew to their waiting ship, which was about 100 yards away.

From the bottom of the ship, a beam of light took the three into the craft, and as it did, a fog appeared around the UFO, which was sitting on three legs, and adorned with mult-colored lights.

Soon, the ship rose about 50 feet high; and disappeared from sight. The area of the encounter is also one where crop circles often appear, and also where Chacinski’s picture was taken.

This incredible report of a close encounter in Poland is still under investigation.