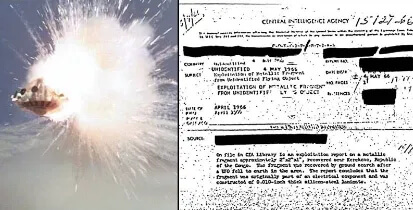 According to a CIA report, the incident occurred on May 4, 1966, and not only was the fragment of the object recovered but, if it had been something terrestrial re-entering the atmosphere, the “country of origin” could not be determined.

The document that is available at the end of this post was obtained by our friends at The Black Vault through the Freedom of Information Act (FOIA). And despite its poor readability, it clearly speaks of the recovered UFO piece that was analyzed.

The document says: “The report concludes that the fragment was originally part of an electrical component and was constructed of a 0.010-inch-thick laminate of silicon steel.” Does this indicate that it was man-made? Made out of Earth perhaps? It is not clear.

Furthermore, the CIA could not determine the country of origin, as indicated in the upper part of the document where the words “unidentified country” are distinguished.

As can be seen in the screenshot on these lines, the document obtained is not very legible. This is possibly by design. Of the entire CIA collection, this record remains at the top of a short list of the most interesting items in it.

The records are labeled ‘Poor Original’, indicating that the record they are publishing is the ‘best copy available’. Despite that, there are some other things that can be deciphered outside of the “unknown country” origin.

First, we can conclude that the report is, in fact, about physical material of some kind, obtained from a UFO that “fell to Earth” in Kerekere, Democratic Republic of Congo (Zaire at the time). Its measurements: 2 ”x 2” x 1 ”and it comes from some kind of« electrical component ».

Second, we can determine in the “conclusions” section of the report, that the experts definitely thought it was an electrical component of some kind, but there was nothing that could be used to identify the country of origin. They were also able to determine that the surface appearance and the ‘microstructure’ of the part point to excessive high temperature exposure, about 2800+ degrees F. (Note: the number is difficult to determine, but indicates a very high temperature) .

Third, we can also conclude that the CIA analyzed the fragment and obtained a chemical breakdown of what it was composed of, which includes carbon, manganese, silicon, nickel, etc.

Another fact is that the CIA had numerous photos of the artifact, whatever it was. However, being a «Poor Original», it is almost impossible to distinguish any detail of them. What can be seen are the measurements and the “side view” type captions in the photos within the report.

While the CIA may have simply picked up a fallen piece of space junk – a satellite or other type of rocket component – the fact is that they were unable to fully identify it. And that, at least, gives some margin to think that it could be an artificial object of extraterrestrial manufacture, and makes clear the explicitness of the record in cases of recovery of unknown objects – not as in other cases where they pretended to be -.

The complete PDF document is available and can be downloaded HERE .