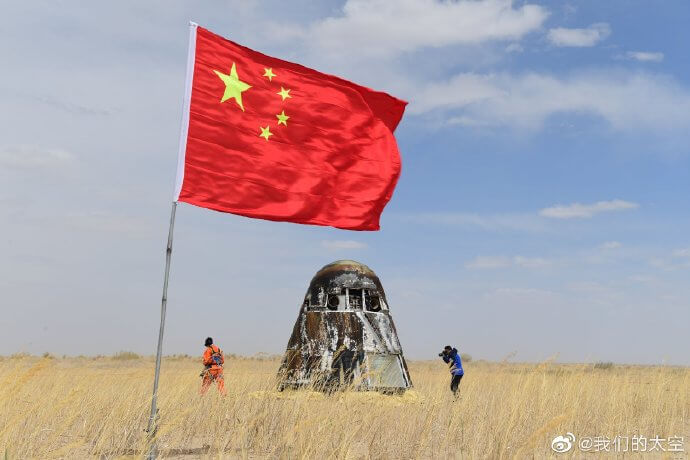 China’s next-generation crewed spacecraft, which will replace the venerable Shenzou spacecraft in the coming years, recently returned to Earth after spending almost three days in space. The purpose of this mission was to test the deep space capabilities of the spacecraft that will be sending Chinese astronauts (taikonauts) to orbit, to the Moon, and beyond in the coming years.

In addition, this mission also saw China’s new Long March 5B (CZ-5B) heavy-lift rocket launch a payload to space for the first time. This rocket is the latest installment in the Long March family and will be vital to the creation of the third and largest Chinese space station. These two milestones have brought China a step closer to becoming a full-fledged superpower in space.

The uncrewed spacecraft and Long March 5B launched on their maiden voyage together in the early morning hours of Tuesday, May 5th, from the Wenchang Satellite Launch Center – located on Hainan Island in the South China Sea. Once they reached orbit, the booster and spacecraft separated, and the second part of the mission commenced (i.e. the validation of the crewed spacecraft prototype).

Over the course of the next 67 hours, the spacecraft performed seven orbit-raising maneuvers and reached a maximum distance (apogee) of around 8,000 km (4,970 mi) from Earth’s surface. This is similar to what was done during Exploration Flight Test 1 (EFT-1) with the Orion spacecraft back in 2014 – though that mission lasted only 4 hours and completed 2 orbits.

By Friday, May 8th, at 01:21 AM EST (10:21 PM, May 7th, PST) the spacecraft completed its deorbit burn, which was followed by the separation of the service and crew modules about twelve minutes later. The new spacecraft deployed its three parachutes to slow down during descent and airbags were deployed from the underside to cushion the landing.

These represent an upgrade from the Shenzhou spacecraft, which relied on only one parachute and had no airbags. Another thing that sets the new spacecraft apart from its predecessor is the fact that it is intended to be partly reusable (much like the Orion spacecraft). Once it returns to Earth, crews will refurbish it by removing and replacing the heat shield and removing any additional scoring from the hull.

Guo Bin, the deputy chief designer of the spacecraft, explained during an interview with China’s CCTV, he and his colleagues specifically designed the heatshield to accommodate this:

“We designed a foldable shield. During the flight, when the spacecraft needs docking with the space station, the shield will spread out, exposing the rendezvous and docking mechanism and sensor.

The Chinese Aerospace Science and Technology Corporation (CASC) confirmed that the spacecraft touched down at 01:49 AM EDT (10:49 PM, May 7th, PDT) in the Dongfeng landing area in China’s northeastern Jilin province. By Monday, May 11th, at 11:33 AM EDT (08:33 AM PDT), a spent rocket stage of the Long March 5B re-entered Earth’s atmosphere over the Atlantic Ocean.

According to reports from the US Space Force 18th Squadron, the booster landed safely in the ocean off the west coast of Africa. However, according to various sources, some pieces of the rocket also landed in the village of Mahounou in Cote d’Ivoire and about 15 minutes away from New York City. Luckily, no injuries or fatalities were reported.

The primary objective of this mission was to validate the Long March 5B’s capabilities; in particular, whether it could lift upwards of 20 metric tons (22 US tons) to orbit. The reason for this is because China hopes to use this rocket to launch the components that will make up the proposed Large Modular Space Station (aka. Tiangong-3).

To simulate that much mass and turn the uncrewed spacecraft into a payload analog, ground crews loaded it with 10 metric tons (22,000 lbs) of extra propellant, which brought its launch mass to a total of 21.6 metric tons (23.8 US tons). This added fuel also allowed the spacecraft to perform the extensive maneuvers it did once in orbit.

The spacecraft also carried over 10 experimental payloads and technology demonstrators, which included a composite materials 3D printing system, a time-triggered Ethernet system, and even a range of seeds. This last experiment was intended to test the effects of microgravity and radiation from the Van Allen belts on the growth of plants, which is essential to any plan to build space stations and habitats in orbit.

This latest mission has sent a clear message to space agencies around the world and the astronomical community. China is stepping up its space game and will be expanding its presence in LEO in the coming years. Beyond that, they will also have the capability to send taikonauts to the Moon in this decade, followed by the creation of a permanent lunar base in the next (and maybe even crewed missions to Mars).

The next two decades are going to be an exciting time for space enthusiasts! When at last we return to the Moon to stay and set foot on Mars for the first time, we can expect that several flags will be planted in the soil!

Man we better get a move on this , stop dragging and beating around get us up their. We can’t do this job while grounded here!