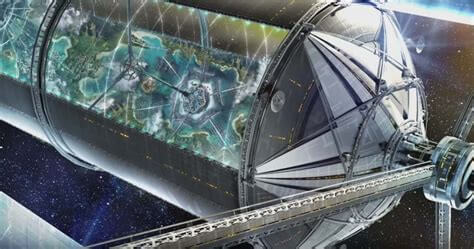 Blue Origin wants to build the tools to help humanity explore the solar system, ultimately expanding life out to take advantage of more resources and support over one trillion people.

Jeff Bezos, founder of both the space-faring firm and internet retailer Amazon, explained at a Thursday event why Blue Origin is working to reduce the cost of rocket launches. It’s all part of his long-term vision to enable humans to continue growing, exploring the stars instead of staying on Earth and gradually rationing its use of energy and resources. During the event, he unveiled the Blue Moon lander capable of sending humans to the moon by 2024.

Bezos, who forms part of a new commercially-driven space race, has a slightly different vision to his contemporary Elon Musk. While the SpaceX founder wants a city on Mars by 2050, Bezos is more interested in staying close to humanity’s home — echoed in the name of the company, “Blue Origin.” The company’s long-term goal is to build the tools so humans can create giant floating colonies around the Earth, supporting all manner of ecosystems.

Blue Origin: Why Does Jeff Bezos Want to Build a Space Colony?

Bezos highlighted immediate problems on Earth like hunger, homelessness and climate change. However, he also noted long-range problems, like the fact that humans will run out of energy on Earth. Humans use 97 watts of power per person in their metabolic rate, but as humans in the developed world people use 10,500 watts per person.

The abundance of energy has enabled generations to live a better life than their predecessors, but it’s an unsustainable trend. Human energy use is compounding at three percent, essentially doubling energy use every 25 years. Global energy use today could be met by covering Nevada in solar cells, but in around 200 years at current trends, humanity would need to cover the entire Earth’s surface in solar cells to meet energy needs.

Humanity has focused on efficiency to meet energy demands. In the year 1800 a human had to work 84 hours to earn enough for one hour of artificial light, but in 2019 a human only has to work 1.5 seconds for the same amount of light. Similarly, air transport has seen a fourfold efficiency gain: the amount of fuel needed to fly one person from Los Angeles to New York City has dropped from 109 gallons to 24 gallons. Computers have grown one trillion times more efficient, completing more calculations per kilowatt-second than ever before. These efficiencies, however, mean humans simply use more of these products.

“So, we get to choose,” Bezos said. “Do we want stasis and rationing, or do we want dynamism and growth?”

Blue Origin: What Will Jeff Bezos’ Space Colonies Look Like?

Bezos envisions a trillion humans in the solar system, with “a thousand Mozarts, or a thousand Einsteins.” In his vision, they would be living in colonies similar to the ones developed by physicist Gerard K. O’Neill.

O’Neill explained that humans are unlikely to live on planetary surfaces, as they’re small, far away, and essentially unable to support real-time communication. They also lack Earth-like gravity. Instead, they would live on something like this:

These colonies are vast, with the International Space Station a tiny dot in comparison. Centrifugal force would be used to create artificial gravity, similar to the structures in Stanley Kubrick’s 2001: A Space Odyssey. Each colony would hold one million people. These colonies could create “pleasant” places to live, similar to Earth-based cities.

Humans could create recreational colonies, with zero gravity for flying around for fun.

They could replicate the most tropical regions of Earth, which Bezos described as “Maui on its best day.”

“What does the architecture look like when it no longer has a primary purpose of shelter?” Bezos said. “We’ll find out.”

The colonies can be stationed close to Earth, so people can travel to and from with ease. Earth would become zoned residential and light industry, a “beautiful” place to visit. Heavy, damaging industry can be done off-Earth.

The amount of energy required to go between these colonies would be very low and fast, described by Bezos as a “day trip.”

It’s a bold idea that goes beyond even many science fiction authors’ imaginations. In an interview with O’Neill played at the Blue Origin event, legendary writer Isaac Asimov said that science fiction basically never touched on ideas like these because many authors were “planet chauvinists,” adding that the closest he came was through asteroid mining.

To create these colonies, humans will depend on two factors: radically reducing the cost of space launches, and utilizing in-space resources. Lifting all resources from Earth would be too difficult.

Bezos admitted that he would not be the one to make the colonies. The children in the front row of the audience may, as will their children. Bezos described “entrepreneurial activity,” future companies expanding into this new market.

Unfortunately, the lack of infrastructure means society cannot currently support these future industries. Bezos compared it to Amazon, which could use existing postal services to support its initial company. It didn’t need to invent a new infrastructure, nor did they have to create computers, or payment systems, or telecom networks. These networks enabled Amazon to benefit from this existing work. Similarly, Bezos explained that his generation will create the infrastructure to colonize space, paving the way for future generations to create the space version of Amazon and the like.

As his firm continues work on space rockets like New Glenn and lunar landers like Blue Moon, Bezos is focusing on building this infrastructure to help support colonies he probably won’t live to experience.