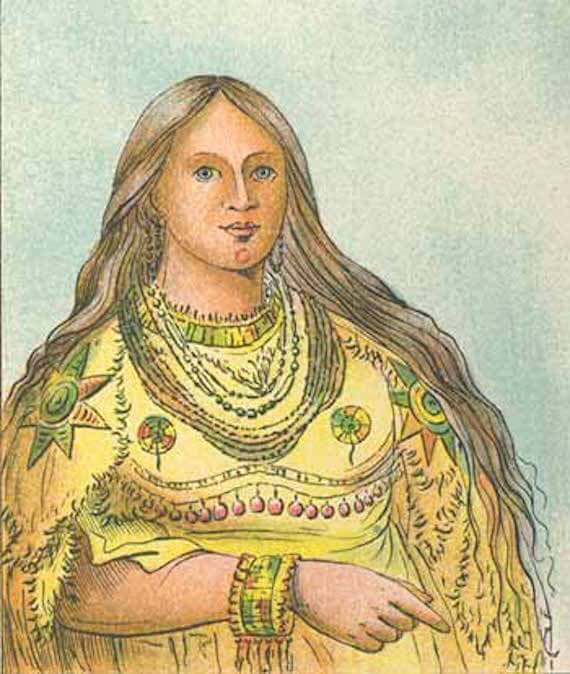 History holds many oddities that we may never fully understand, either through incomplete documentation, disinterest at the time, or simply a big question mark that hangs over all. Among these are mysterious tribes of people that have been encountered and confronted in all corners of the globe, often vanishing before we really understand them and leaving us perplexed at just who they were or where their origins lie. One such tribe was a mysterious group of Native Americans who appeared to explorers as something quite European in nature, although their ways and beginnings have always been cloaked in shadows. Known mostly from historical accounts, their origins remain murky, their lineage uncertain, and they are a historical curiosity we may never fully understand.eraoflight.com

During the era of early European contact, the native peoples of North America held many curiosities for explorers and settlers coming to this new, wild land. These tribes were numerous, and displayed rich variety between different cultures, as well as myriad languages, customs, and traditions that inspired awe, wonder, curiosity, bafflement, and even fear in the European adventurers who bravely delved into this uncharted new world and tried to tame it. Yet as fascinating as these new peoples were, perhaps the most interesting was an alleged tribe of natives who were said to look decidedly Caucasian in nature.

The first reports of what would come to be known as the Mandan tribe began to trickle out from French explorers in the region of the Missouri River in present-day North and South Dakota in the early 1700s. These natives were said to have rather fair skin and to have red or blonde hair and blue or grey eyes, and indeed especially the women were purportedly so Nordic in appearance that if it were not for their clothing they were said to be nearly indistinguishable from whites. In 1738, the French Canadian trader Sieur de la Verendrye made the first official outside contact with the Mandan and described them as living in 9 villages at a tributary of the Missouri river called the Heart River, and noted that they also exhibited customs that were decidedly more European than the neighboring tribes.

By 1784 the word had gotten out on this mysterious tribe of blue-eyed Indians, and they were featured in the media, with the August 24, 1784 edition of the Pennsylvania Packet and Daily Advertiser proclaiming that a new tribe of white people had been discovered and that they were “acquainted with the principles of the Christian religion” and “extremely courteous and civilized.” Perhaps one of the more famous of the explorers to come across the Mandan was none other than Lewis and Clark, who visited the tribe in 1804 and described them as “half-white,” as well as peaceful, civilized, courteous, and polite. They also noted that the tribe’s numbers had dwindled significantly due to the frequent small pox epidemics that terrorized them, as well as attacks against them by neighboring tribes, namely the Assiniboine, Lakota, Arikara and the Sioux.

Of course this all led to intense speculation as to what the origins were of this bizarre tribe, and one of the earliest ideas put forward was that they were the descendants of pre-Columbian explorers to the New World. For instance there were many legends from various regions of the present day United States of Welsh speaking natives, perhaps descended from Welsh settlers coming to these shore in the 12th century, in particular a Prince Madoc, who along with his followers was said to have emigrated to America from Wales in about 1170.

One Welsh explorer by the name of John Evans became so convinced that this was the case with the Mandan that he launched an expedition up the Missouri river in 1796 to search for them and prove that their language was derived from Welsh and contained Welsh vocabulary. Evans would trek up the river in the winter of 1796 and he could find no evidence whatsoever of the Welsh influence he had been so sure he would find, forcing him to concede that this was not where the Mandan origins lay. Indeed, he became extremely skeptical that there were any of these legendary “Welsh Indians” at all, saying in a letter to a Dr. Samuel Jones:

Thus having explored and charted the Missurie for 1,800 miles and by my Communications with the Indians this side of the Pacific Ocean from 35 to 49 degrees of Latitude, I am able to inform you that there is no such People as the Welsh Indians.

Another explorer who believed that the Mandan had European roots, perhaps even Welsh, was the frontiersman and pictorial historian George Catlin, who spent several months with the tribe in North Dakota, living amongst and drawing and painting them in 1832. One of the things that first struck him about these mysterious people was just how European they looked, describing that many of them were nearly white and had light hair and blue eyes, and he also noticed that they had more advanced techniques for manufacturing goods and dwellings, customs, traditions, town layouts, and language vastly different from neighboring tribes. Caitlin would say of the Mandan:

They are a very interesting and pleasing people in their personal appearance and manners, differing in many respects, both in looks and customs, from all the other tribes I have seen. So forcibly have I been struck with the peculiar ease and elegance of these people, together with their diversity of complexions, the various colours of their hair and eyes; the singularity of their language, and their peculiar and unaccountable customs, that I am fully convinced that they have sprung from some other origin than that of the other North American Tribes, or that they are an amalgam of natives with some civilized race.

Even some of the legends of the Mandan people themselves expressly mentioned that they had been descended from a strange white man who had appeared to them aboard a canoe in ancient times after an enormous flood had wiped out everything in sight. They claimed that this stranger had taught them about medicine and had influenced their religion, which oddly featured many of the same beats as Christianity, such as a great flood, a virgin birth, and a child born who could work magical miracles, among others. This was noticed by other later expeditions as well, such as an 1833-34 expedition led by German naturalist A.P. Maximilian, who felt that the similarities between Christianity and the Mandan religion were too close to be mere coincidence. Caitlin would write of this:

It would seem that these people must have had some proximity to some part of the civilized world; or that missionaries or others have been formerly among them, inculcating the Christian religion and the Mosaic account of the Flood.

Another idea on the Mandan origins is that they came from pre-Columbian visitations by Viking explorers. The first official European to ever officially make contact with the Mandan tribe, Sieur de la Verendrye, claimed that at the time he had found a strange runestone with Nordic inscriptions on a riverside near the village. The stone was allegedly sent to France to be studied but it is unclear what happened to the “Verendrye Runestone” after that, and indeed it is uncertain if it ever really existed at all. Unless the stone ever turns up again it remains just as mysterious as the Mandan.

The idea of Vikings in the New World before the days of Columbus has been talked about for some time, with one prevalent and somewhat controversial theory having to do with Eric Thorwaldsson, also more famously known as “The Red,” who established two colonies on the coast of Greenland in 986. The story goes that Eric The Red then abandoned these outposts when the wild, rugged land proved to be too cold and forbidding, and made his way to North America along with the colonists. The theory then claims that the King of Norway is then said to have sent an expedition to the New World to find out what had happened to them, and that this expedition made their way up the rivers to end up in the Dakotas and other areas, after which they became stranded and then assimilated into the native tribes, giving them their Nordic genes.eraoflight.com

However, there is very little evidence to prove that Vikings ever actually reached North America. The Verendrye Runestone vanished without a trace and then there is the hotly debated Kensington Runestone, which was a giant slab covered in runes allegedly found by Swedish immigrant Olof Ohman in Minnesota in 1898. In this case the inscriptions claimed that the runes had been created by 14th century Scandinavian explorers, and although the authenticity of the runestone is still debated it has mostly been classified as a hoax by the scientific community.

Regardless of where the Mandan really came from the fact is that we will probably never know for sure. In 1838 the tribe was hit by a devastating smallpox epidemic, and although this was a specter they had been haunted by for centuries, this time it was absolutely catastrophic, wiping them out at such a rate that after only a few months there were only an estimated 30 to 140 of them left. With the Mandan teetering on the edge of extinction, enemy tribes swept in and took them as slaves, after which they were assimilated and absorbed.

Consequent intermarriage and interbreeding meant that any unique genetic heritage they may have had was quickly erased, and the last known full-blooded Mandan was a Mattie Grinnell, who died in 1971. Since there are no more full-blooded Mandan left and only an estimated 8 speakers of its language left today, it is difficult to get a grip on their heritage, even with our advanced DNA testing techniques, and their origins and history will likely forever remain shrouded in mystery, leaving us to merely speculate and debate on it.

It is somewhat sad that this tribe disappeared before we were ever able to really comprehend who they were. All we are left with is the tales and accounts from explorers, but other than that their legacy has evaporated into the tides of history. They are a vanished people who sowed bafflement and wonder, but ultimately left numerous questions swirling about them, doomed to a limbo of superstition, speculation, and rumor. Who were these people? Why did they look and act so differently, and what was the meaning behind their strange ways? To the alien explorers just starting to penetrate this wilderness at the time they may have seemed to be baffling anomalies, and interestingly they still are.