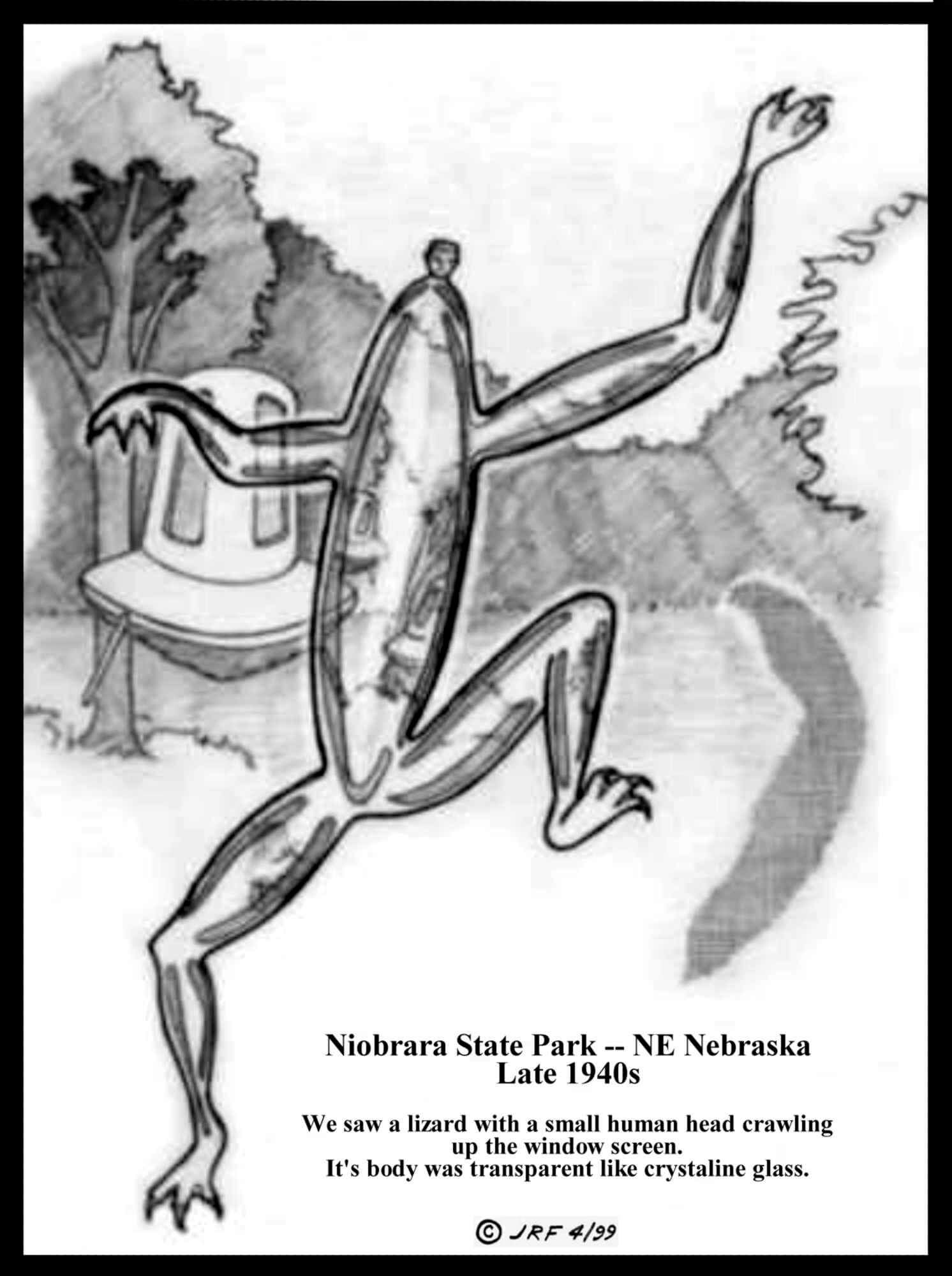 During some encounters what happened seemed so puzzling we couldn’t seem to make sense of them. We couldn’t rationalize the purpose or meaning. However, during my 1986/1987 flood of recollections I was able to link them to a broader range of knowledge, especially as I had the time to review them and compare one experience to another or others, even if years or decades separated the encounters I was trying to understand.

The following is a very weird encounter that took place in a cabin at Niobrara State Park when I was traveling on an extended trip with an aunt and uncle and family. We had just rented a cabin at the park which is in the northeast part of Nebraska. Yet, this was the old park which eventually was vacated because of floods on the Niobrara River. At present the new park is located in the hills just west of this location. This encounter is narrated in Chapter 7 of the book Eminent Discovery Volume 1. I know it’s unbelievable, but I assure you it happened.

After encountering craft throughout one day and night, we were exhausted. The next morning we rented a cabin at the park to get some rest. After a large bell-shaped object appeared and exploded several times just outside the cabin, my uncle exchanged our cabin for one that was more centrally located in the park. He got completely hyped out and thought the craft would be less likely to bother us there.

All six of us tried to get some sleep in the small bedroom at the southwest corner of the new cabin, while the other adult couple who traveled with us slept in the larger room that comprised the rest of the cabin.

Suddenly, my uncle let out a blood curdling scream. He jumped to his feet and staggered backward into the north wall. He was so frightened, he couldn’t speak. He crashed into the wall with a loud boom. Then he just stood there shaking and pointing his finger toward the southwest window. We all looked at the window, got frightened, jumped up, and joined him at the wall.

What we saw appeared to be a one-and-one-half foot lizard clinging to the window screen. It appeared gruesome and slowly crawled upward. More disturbing than its gruesome body was that its body seemed to be completely clear, like crystalline glass. We could hardly believe it. But as it slowly moved its arms and legs, we saw through them and its body. We eventually calmed down a little and my uncle and I cautiously walked close and shut the window. Standing there, our heads just a foot or so from its belly, we looked through it. It seemed pure as a prism. We saw trees on either side and blue sky in the center of its body. We also saw what appeared to be two or more white craft sitting just outside the window. We stood up and actually saw a white bell-shaped object sitting under one of the tall cottonwood trees.

I began to get disoriented and suddenly felt myself move outside the cabin, with my uncle nearby. This shook me to the core, because it seemed as if we quickly had passed right through the window or wall.

We eventually got so curious about the craft, we went to an open door that was on the side of the craft. The craft was elongated and hovered near the location where we had see the bell. It looked like the fuselage of the large object, but we didn’t know it at the time. We again got frightened when we saw a tall gray lizard-like being sitting in one of the pilot’s seats. He reacted as if he were waiting for us. He appeared similar to the two strange beings who had greeted us at the booth in western Nebraska.

He spoke just a few short words, inviting us inside to take a trip with him. Unfortunately, I don’t remember much more, except for seeing, from inside the fuselage, gauges and levers on a control panel that was just under the window in front of the being.

I don’t remember leaving in the craft or returning. The next thing I knew we floated back inside the cabin, through the wall.

Again standing on the floor, gazing closely at the transparent lizard, I suddenly noticed it had a very small human head that somewhat pulsated, as if were being recreated continuously. I moved up very close to it. When I saw it pulsate, I got shocked and jumped back. When my uncle saw it, he gasp for air. The lizard had slick black hair and its face was sharp and handsome. I know it’s silly, but when we saw it, it reminded us of Superman.

The lizard suddenly disappeared. We again got shocked, jumped back several feet, then witnessed one of the most bizarre things I had ever seen.

None of us knew what to make of it. We were so tired that we could hardly talk to one another.

After it became apparent nothing else would take place, my uncle insisted we get some rest. But it wasn’t long before a small booth developed from a small roaring volume of whirling fog near my cot. A voice then began to speak to me. My uncle got so angry, the booth soon dissolved back into the fog which in turn dissipated, while at the same time the voice seemed to garble away into silence. It seemed as if my uncle’s anger had melted it away. Still suspecting I was somehow attracting the craft, beings and objects, my uncle insisted we children go outside so the adults could sleep.

I encountered other objects while sitting outside near the front door, but couldn’t make much sense out of any of it. I do remember, however, the voice encouraged me to join them or to do something I didn’t care to consider. I have faint recollections indicating he was trying to encourage me to cooperate with them more freely and informing me that I should consider college. Neither idea appealed to me at all. I remember feeling very depressed and alone. I don’t remember much about our trip after that, but I do recall we went northward and visited points of interest in eastern South Dakota and North Dakota.

It’s important to note that a few other UFO contactees, during the last half of the 1900s, reported seeing UFO creatures on their window screens.