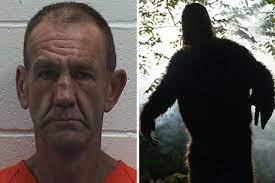 EXCLUSIVE: UFO and Bigfoot researcher Stan Gordon has revealed to the Daily Star some of the specific cases that led him to believe sasquatches “may not be flesh and blood animals”

Bigfoot is “not a flesh and blood animal“, according to a researcher who has documented reports linking sasquatches to UFOs.

Stan Gordon – who doesn’t claim to have seen a Bigfoot or UFO – has been researching mysterious goings-on in Pennsylvania, US for the past 63 years.

Stan previously went public with his theory that Bigfoot may be an “interdimensional” being that can vanish into thin air.

Now, speaking exclusively to the Daily Star, he’s opened up about specific reports that led him to that conclusion and showed how sasquatches and UFOs are connected.

Stan has been researching mysterious goings-on in Pennsylvania, US for the past 63 years (Image: Stan Gordon)

He was keen to make clear he doesn’t believe Bigfoot is “a passenger or a crew member of a spacecraft”, adding that “it is very possible there is more than one origin” of UFOs other than outer space.

The first incident occurred in Pennsylvania on October 25, 1973, recounted to him by a state trooper and some of the 15 witnesses.

Three of those witnesses – two young boys and an older man – claimed to have seen a giant, dome-shaped glowing object hovering in a field.

“Then their attention is drawn to a barbed wire fence about 75ft away. There they see these two, huge, upright, hair-covered creatures,” Stan explains.

“The one in front is about eight feet tall. The one behind it is about seven feet tall. They have no apparent neck and their arms are so long they’re hanging below their knees.”

In true American fashion, their first reaction of the witnesses is to shoot.

The researcher claimed there are increasing amounts of Bigfoot reports in populated areas (Image: Getty Images/iStockphoto)

The older man claimed he first fired two tracer bullets, the second of which one of the creatures reached up to as if to catch.

At this point the dome is said to have vanished but the man kept shooting at the creatures.

Stan said: “I remember him telling me: ‘I’ll never forget how I’m pumping live ammo into the largest creature and he keeps staring at me with those glowing green eyes – and there’s no affect on him whatsoever’.”

Stan identified Fayette County, Pennsylvania and areas along the Chestnut Ridge as hotbeds of similarly bizarre reports, and 1973 as the year things really kicked off.

The expert stressed he’s not suggesting Bigfoot is a passenger or a crew member of a spacecraft from another planet (stock) (Image: Getty Images)

Another incident from there was reported on February 6, 1974, when a woman living “deep in the mountains” went out to her front porch – carrying a shotgun – after hearing some strange noises.

“To her shock, in front of her there’s a huge, hair-covered ape-like creature which raises its arms above its head when she turns on the light,” Stan said she claimed.

“She fired right into it, right into the midsection. She said moments later the creature disappeared with a bright flash of light.

“There was a UFO hovering over the woods at the same time.”

Stan also spoke of reports linking Bigfoot to what he called “mini-UFOs”, or orbs, sized anywhere between two inches to two feet in diameter.

He claimed some have reported seeing sasquatches holding the orbs.

In a report in May 2019 from outside Pittsburgh, one man claimed he spotted a Bigfoot in his back garden before it darted into the woods behind his house.

“About three seconds after it had gone, at the exact point it entered the woods, a bright sphere of light about four inches in diameter suddenly appeared,” Stan said.