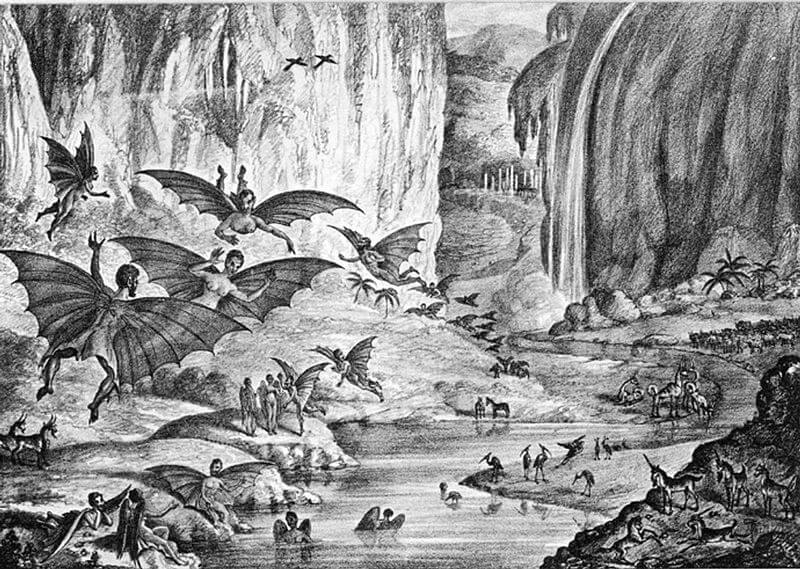 Curiosity about aliens goes back farther than you might think.

Belief in extraterrestrials feels like a distinctly recent phenomenon. Some of the earliest flying saucer “sightings” date back to 1947, the same year the “Roswell incident” — which seems to have been the crash of a government weather balloon — took place. Interest in UFOs (Unidentified Flying Objects) peaked during the early days of the space race, and then again in the late 1970s as skepticism of the U.S. government grew after Watergate and Vietnam.

Each of these waves of interest waned after some of the most prominent “alien encounters” were debunked. In the last few years, the Pentagon has admitted to having a program that studies Unidentified Aerial Phenomena (UAPs, the government’s preferred term) and released video taken by Air Force pilots. We may be entering a new period of interest in the possibility of life on other planets.

Pop culture interest in aliens also seems to be mostly an artifact of the last 75 years —modern movies and books are littered with extraterrestrials — but in fact, interest in life on other planets goes back much farther. Many of the most distinguished thinkers of the Enlightenment era had a great interest in the possibility of alien life and wrote extensively about it. The 1700s was a period of widespread belief in life on other planets until several hoaxes in the nineteenth century made belief in extraterrestrial life unfashionable.

The Scientific Revolution made extraterrestrials imaginable

After the Copernican Revolution in the 1500s and 1600s, Europeans realized that the universe was more complex than they had imagined. They also came to understand that Earth’s — and therefore humans’ — place in the cosmos was rather insignificant. As astronomers used new technology to investigate the sky, it became possible to imagine the Moon, Mars, and the rest of the solar system in detail. The seventeenth and eighteenth centuries were a period filled with breathtaking discoveries about space, culminating in the discovery of Uranus by William Herschel in 1781.

These scientific discoveries influenced the Enlightenment, an era in which thinkers questioned religious dogma and tried to think for themselves about all sorts of issues. Scientists like Isaac Newton had made the case that that the universe operates according to a set of universal rules, meaning that if the conditions for life existed on Earth, they could exist elsewhere.

It was common at the time for educated people to believe in “cosmic pluralism” — the idea that Earth was one of many planets, orbiting many stars, inhabited by myriad forms of life. Though some astronomers in earlier eras — like Giordano Bruno, who was burned at the stake in the late 1500s — had gotten in serious trouble with the Inquisition for believing in pluralism, it became fashionable among intellectuals a century later to imagine life on other worlds.

The “Plurality of Worlds”

Belief in extraterrestrials was popularized by one of the first works of science written for the general public, Conversations on the Plurality of Worlds by Bernard de Fontenelle. To avoid censorship, Fontenelle framed his book as a conversation between a learned philosopher and a curious noblewoman (that way, he didn’t have to take a side). It worked, and he avoided being burned at the stake like Bruno. In fact, the book was one of the biggest hits of the late 1600s; it was translated into 10 languages. Fontenelle addressed the religious objections to belief in alien life by saying that

“When I say to you that that the moon is inhabited, you picture to yourself men made like us, and if you’re a bit of a theologian, you’re instantly full of qualms. The descendants of Adam have not spread to the moon, nor sent colonies there….It rests entirely upon the men in the moon, but it’s you [his religious critics] who are putting men on the moon. I put no men there at all: I put inhabitants there who are not like men in any way.”

Fontenelle’s book inspired writers across the continent of Europe to imagine other worlds and the life on them. Christiaan Huygens, the discoverer of the rings of Saturn and one of the most renowned scientists of his time, attempted to make a scientific case for the possibility of alien life. He based his speculations on his understanding of probability — arguing that if even one other habitable planet could be found, there were likely many — and reports of species discovered by European explorers in the New World.

According to Huygens, alien species would have adapted to their environments. Thick atmospheres like the one on Venus might create more species that could fly, while heavier gravity might yield creatures no bigger than a mouse. He even allowed that some of these creatures could be:

“rational Creatures possess’d of different degrees of Reason and Sense…. That there is some such rational Creature in the other Planets, which is the Head and Sovereign of the rest, is very reasonable to believe.”

Huygens said that aliens would have an “infinite possible variety of Figures,” but would in a few ways be similar to humans. He figured that they must have some kind of hands and feet, would listen to music, write down their history, and pursue science.

In the wake of best-sellers like Fontanelle’s and the speculation of respected scientists like Huygens, it became fashionable for serious thinkers to discuss the possibility of alien life, whether in fiction or philosophy. Many thinkers used the possible existence of aliens as a way to comment on human society. Voltaire was an example of this, his 1752 book Micromegas imagined a giant, 6,000 miles tall, that visits Earth from the Sirius solar system. The giant arrives in Europe and proceeds to puncture the arrogance of the continent’s greatest thinkers. The Baron de Montesquieu, in his Spirit of the Laws, thought about what laws might be like on other planets. He speculated that extraterrestrials should have systems of laws like those on Earth:

“Particular intelligent beings may have laws of their own making; but they have some likewise which they never made.”

Many of the major figures of the American Revolution were believers in the possibility of extraterrestrial life. John Adams wondered whether Jesus had appeared on dozens of planets in succession to save the inhabitants of each, or whether everyone was doomed to hell but Earthlings. Ben Franklin, in his Articles of Belief, wrote:

“For I believe that Man is not the most perfect Being but One, rather that as there are many Degrees of Beings his Inferiors, so there are many Degrees of Beings superior to him. Also, when I stretch my Imagination thro’ and beyond our System of Planets, beyond the visible fix’d Stars themselves, into that Space that is every Way infinite, and conceive it fill’d with Suns like ours, each with a Chorus of Worlds for ever moving round him, then this little Ball on which we move, seems, even in my narrow Imagination, to be almost Nothing, and my self less than nothing, and of no sort of Consequence.”

Some of Ben Franklin’s competitors in the American almanac business also spoke of their belief in extraterrestrial life. Samuel Ellsworth, in 1785, said that the inhabitants of Mercury were quick-moving and talkative. Venusians were supposedly lustful and Martians were warlike, following their planets’ mythological namesakes.

People’s ideas about extraterrestrials have always been more about ourselves than the aliens. It’s striking that, in the 1600s and 1700s, aliens were nothing to be afraid of. There weren’t government conspiracies or invasion fleets. Enlightenment thinkers believed that humans were glorious beings, endowed with curiosity and reason, and governed by immutable laws of the universe. They thought the same of creatures on other worlds. For them, extraterrestrials were very much like us, they had laws, societies, and wanted the same thing as the philosophers in Europe’s salons — to uncover the secrets of the universe.

By the early 1800s, scientists even began to construct plans to contact alien societies. Renowned mathematician Carl Gauss devised several methods in the early nineteenth century to reach out to extraterrestrials. He thought about using the heliotrope, a surveying instrument, to flash signals at other worlds, or planting wheat in a gargantuan pattern in Siberia to make it clear to other intelligent life-forms that we were here. Another German astronomer, a few decades later, came up with the idea of having a 30-kilometer moat of burning fuel as a signal to anyone passing by in space.

If belief in extraterrestrials was so commonplace among Europe’s most distinguished minds, what happened to make the subject a shameful one for serious thinkers? In short, some believers got overzealous and misled the public. More powerful telescopes led astronomers like Franz Gruithuisen to see shapes on the moon that they misinterpreted as buildings, roads, and canals.

In 1835, the New York Sun published a series of breathtaking accounts of life on the Moon. They wrote that esteemed British astronomer John Herschel (whose father, William, had speculated about life on the Sun) had proven the existence of a Lunarian civilization, complete with bat-people and giant two-legged beavers.

The articles were either an attempt to make fun of scientists like Gruithuisen or just a hoax to boost sales. Either way, they were a sensation for a few weeks — until Herschel, who had not been in on the hoax, made it clear he had seen no such things. After this, serious people began to disavow belief in alien life — it was something for the gullible. Later mistakes like Percival Lowell’s “sighting” of canals on Mars only made belief in aliens less respectable.

People went through a few more waves of belief and skepticism about extraterrestrial life in the nineteenth and twentieth centuries. At times, respected scientists like Carl Sagan have lent their reputations to the search for intelligent life, making it seem worthy of serious study. At others, thinking about extraterrestrials has been left to the Weekly World News and bad YouTube “documentaries.” Still, some people — including some of the Enlightenment’s towering figures —have taken the possible existence of alien life seriously ever since the Scientific Revolution.