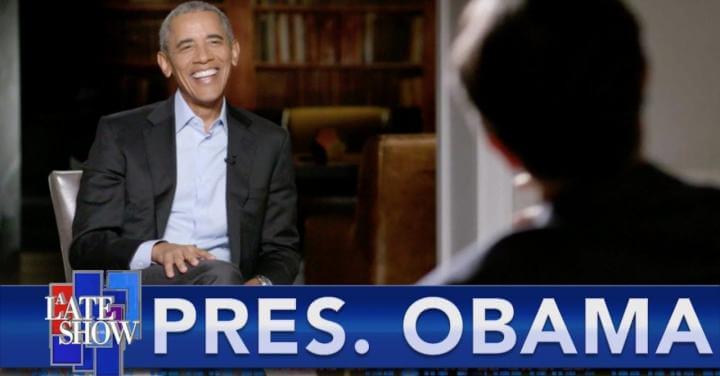 Former United States President Barack Obama may know something about aliens. Obama recently released a memoir titled A Promised Land. To promote the book, he appeared on The Late Show with Stephen Colbert. During the interview, Colbert inquired about whether Obama ever received briefings about aliens and UFOs. “Certainly asked about it,” Obama replied. When pressed about whether he received any information, the former president wouldn’t offer any details. “Can’t tell you. Sorry.” That wasn’t enough to get Colbert off the scent, with the host suggesting Obama clamming up rather than brushing off the question implies he has something to hide.

“All right, I’ll take that as a ‘yes,'” he Colbert said. “Because if there were none, you’d say there was none. You just played your hand. I thought you were a poker player. You just 100 percent showed your river card.”

Obama retorted, “Feel free to think that.” Speaking more broadly, he continued, “It used to be that UFOs and Roswell was the biggest conspiracy. And now that seems so tame, the idea that the government might have an alien spaceship.” Colbert quipped, “Now the biggest conspiracy is [that] people in Michigan vote.”

Colbert’s joke refers to this year’s presidential election, which President Donald Trump has yet to concede despite contested states certifying Obama’s former vice president, Joe Biden, as the winner. In another interview, Obama compared Trump to the iconic comic book character Richie Rich.

“I think about the classic male hero in American culture when you and I were growing up: the John Waynes, the Gary Coopers, the Jimmy Stewarts, the Clint Eastwoods, for that matter,” Obama said in an interview with The Atlantic to support his book’s release. “There was a code … the code of masculinity that I grew up with that harkens back to the ’30s and ’40s and before that.

“There’s a notion that a man is true to his word, that he takes responsibility, that he doesn’t complain, that he isn’t a bully—in fact he defends the vulnerable against bullies. And so even if you are someone who is annoyed by weakeness and political correctness and wants men to be men again and is tired about everyone complaining about the patriarchy, I thought that the model wouldn’t be Richie Rich—the complaining, lying, doesn’t-take-responsibility-for-anything type of figure.”

What do you think Barack Obama knows about aliens? Let us know in the comments section.