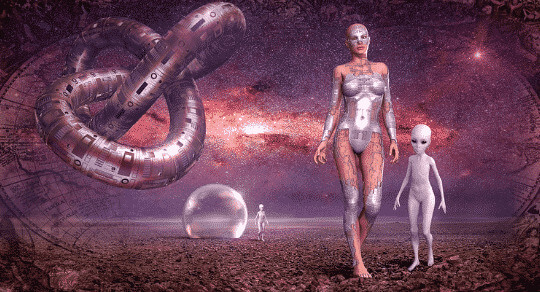 Did you know that astronomers theorize that a lack of stars in a galaxy can mean presence of alien life? When there are no stars in a galaxy, it can mean that a high-level intelligent beings with advanced technology absorbed these stars for power. These would be Type II extraterrestrial (E.T) civilizations. The abilities of Types III, IV, and V are even more extraordinary. Each one of the five types of civilizations is unique.

What Type of Civilization Is Earth?

Earth is actually Type 0, in other words it has not even make it into the scale. It is simply not advanced enough. Famous Physicist Michio Kaku says that the next 100 to 200 years will be crucial for determining if Earth will become Type I civilization, or if humanity will destroy it.

Type 0 means that we use energy from dead animals and plants to survive, rather that our star—the sun. (Which may mean that eventually we can become breatharians after all, gaining energy from the sun instead of food to sustain our bodies).

When humans lived in caves, human civilization started around Type 0.1. These are the hunters and gatherers with limited tools, skills, and knowledge. Understanding how to use fire came at Type 0.2, creating first politics inside the tribes at Type 0.3, making decisions for everyone based on hierarchy at Type 0.4, trading at Type 0.5, and economic dominance at Type 0.6

About 2.5 million years after throwing stones at the prey, we have only improved to Type 0.7, according to astronomer Carl Sagan. Yikes.

“We are the generations that will determine whether me make the transition from Type 0 to Type 1, or we destroy ourselves because of our arrogance and our weapons,” Dr. Michio Kaku said.

The good news is that human advancement is now growing fast, so there is hope for our graduation to Type I, and one day all other types too. With each next type, comes enormous power.

The Kardashev Scale—5 Types of Civilizations

While looking for ET life, Russian astrophysicist Nikolai Kardashev created a scale for types of civilizations in 1964.Originally, it only included three types; but other astronomers have added Type IV and V to the list.

First type or Type I is where humanity hopes to move into in the next 100 years. This would mean that we would be able to properly utilize energy from a neighboring star, our sun. Doing so would also allow humanity to completely control nature and natural forces. Weather, volcanoes, and earthquakes among other forces would all be under our control.

Changes the society has to make before getting to Type I is switching from fossil fuels to renewable energy such as solar and wind. Economy would have to change to global with free markets. Society would be run based on both equality and equity. People would have an ease of communication with no language barriers.

Type II civilization can harness power not only from the neighboring star but the whole galaxy its in. To gather all of the star’s energy a theoretical device called Dyson Sphere is proposed. This device would encompass every inch of a star and gathering nearly 100 percent of its energy to use for the planet.

Getting to Type II means certain guarantee of existence or indestructibility. For example, if a moon-sized object were to try to collide with Earth, a Type II civilization would have the technology to instantly vaporize it. Alternatively, we could also move our planet out of the way. Easy. We’d also be able to move any other planet.

As cool as Type II sounds, the real fun begins at Type III. Type II civilization becomes galactic travelers. The question if whether humanity gets there over hundreds of years of evolution or through using robots and perhaps becoming cyborgs to be able to break the laws of physics.

Type III civilization is able to harness energy from black holes and manipulate the structure of space-time itself.

Kardashev believed that Type IV civilization would be too advanced to even be added to his scale. Other scientists, however, say that it is possible to achieve.

Type IV civilization would be able to gather energy from the entire universe. It would be able to traverse the accelerating expansion of space and even be advanced enough to live inside supermassive black holes. Both will require suing the laws of physics yet unknown to us.

If further advancement is possible, it will bring the civilization to Type V or god-like existence. This level of technology and knowledge will open the way to fully manipulate anything in the universe, or maybe anything in existence.

We may be far away from that on Earth, but we will be so much closer if we stop ruining our planet and creating wars.

If we are to one day become gods, we better start using the power we already have over Earth wisely to show ourselves (and any ETs if they are watching from afar) that we are capable and deserving of the responsibility that comes with it.