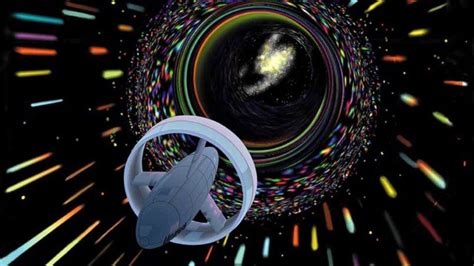 Black holes could provide the energy to travel at relativistic speeds. Image Credit: NASA / Mark Rademaker
A new theory suggests that aliens could fire lasers at black holes to help propel their ships through space.

In a new paper, Columbia University astronomer David Kipping has put forward a hypothetical new propulsion system that an advanced extraterrestrial race could use to achieve relativistic speeds.

The idea is an extension of a method that we already use to boost our own space probes – using the gravity of a planet or other large body to ‘slingshot’ a spacecraft towards its target.

If a photon (a particle of light) is fired at a particular area around a black hole if will circle around and be flung back in the direction from which it came while carrying more energy than it started with.

This phenomenon is known as a ‘gravitational mirror’.

Kipping’s ‘halo drive’ would work by firing a laser beam at a specific point within the vicinity of a binary black hole system so that the newly energized photons are directed straight back at the spacecraft where they would be converted in to momentum – propelling it along at considerable speed.

This process can be repeated over and over to continue accelerating the spacecraft.

Kipping argues that an extraterrestrial civilization may be using such a system to travel throughout our galaxy – especially given the copious quantities of black holes that are known to be out there.

Exactly how the spacecraft would slow down once it reaches its destination however remains unclear.