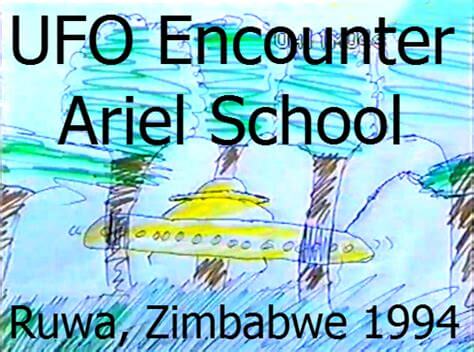 On September 16th, 1994 at the Ariel School in rural Zimbabwe, over sixty school children described seeing a disc-shaped craft land behind the school during morning break time. Some of them reported seeing two beings approach the group. There were multiple sightings of unusual aerial phenomena by thousands of Zimbabweans during this same time period. The 60-some children that witnessed these UFOs were terrified when they were asked to explain what had happened. According to the students, the “strange beings” communicated with them and warned to take care of the environment. They described beings with big heads, no nose (just two holes), no mouth, and long black hair. The children said they were dressed in dark suits and communicated telepathically: “‘I think it’s about something that’s going to happen,’” said one little girl. What I thought was maybe the world’s going to end. They were telling us the world’s going to end. I don’t even know. It just popped up in my head. He never said anything. He talked just with his eyes.’”