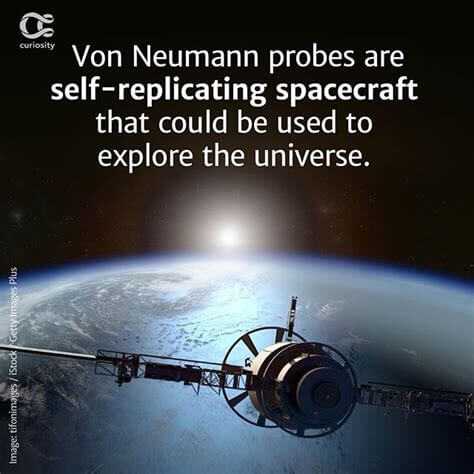 Many believe UFOs can’t be extraterrestrial visitors because of the vastness of space. But what if there was a way to explore the entire Milkyway without even leaving the planet? Self-replicating space crafts called von Neumann Probes could probably cross the galaxy in 5-10 million years. Could UFOs actually be von Neumann Probes?

Space is a pretty big place. Exploring our galaxy, the Milkyway, almost seems impossible. But could it be achievable with technology that is a little more advanced than what we are capable of today? Yes, by using self-replicating space probes named after the mathematician and physicist John von Neumann.

The idea is to send out these space probes in all directions, their first stop might be the asteroid belt where they create copies of themself using mining and manufacturing technology. They then set out, traveling to different systems. When arriving at the systems they start mining and manufacturing again and the cycle repeats itself. All systems may not contain what’s needed but if that is the case the probe simply continues. The numbers of probes would scale up exponentially over time.

To achieve this feat of exploring and self-replication the probe would need these functions.

It’s estimated that in as little as 5-10 million years the small space crafts could have visited most if not the whole galaxy. While 10 million years is vast on a human timescale it’s but a blink of an eye on a cosmic timescale. Once the process has started it’s self-sustaining and does not need outside interference.

So the question becomes why have not someone already done this? It’s not that far-off advanced technology involved. Well, maybe someone already did this and the UFOs we observe are extraterrestrial AI (Artificial Intelligence) explorers.

We are bob, we are UFOs

There is a great SciFi book series called Bobiverse by Dennis E. Taylor. The first book is called “We Are Legion (We Are Bob)“. This series explores how the galaxy could be explored by human-AI intelligence. The book is very funny and witty while at the same time very scientifically plausible.

I prefer Audiobooks and the voice acting for this book series is great. You can get if for free if you start a membership at Audible or maybe you’re already a member. The book is an Audible exclusive.

Mini-spoiler: In the books, there is a situation where a “Bob” probe arrives at a system and a planet with primitive intelligent life – essentially becoming that planets UFO mystery.

For this type the primary objective is to go where no probe has gone before, no pun intended ;). The journey and gathering of information is the goal. If they find a planet with intelligent life they would likely observe and gather data.

These are not as benign as the explorers. They could be various degrees of nasty. Their purpose could be to seek out life and destroy it, eliminating any future competitors. If UFOs are real, they have been around for a while without destroying us, so let’s not worry.

The mission would be to alter living conditions such as the atmosphere or temperature of a planet for colonization. This is probably something we could do on Mars given enough time and some technological progress. Again, let’s hope this is not what’s happening here on earth with the UFO phenomena.

The purpose would be to seed life among the stars. It would be a slow but deliberate process of spreading complex life and maybe intelligent life in a (presumably) mostly life-less universe.

Have you heard about the Zoo hypothesis? Maybe aliens are here and we’re their science project… Maybe they would even defend humanity from an external threat such as a massive asteroid on a collision course. It’s a nice thought if nothing else. The caretakers typically do not interfere to avoid influencing a species culture or development. Maybe that’s why the UFOs are so damn good at avoiding contact?

Uplifting is a concept of taking an already existing species and enhancing them. Maybe making them intelligent if they are not or furthering their capabilities in other ways. It could be unlocking new abilities at a certain stage in the species development. Exciting stuff, and super speculative. Given what we know about gene-technology and gene-splicing one could imagine what a very advanced civilization might be able to accomplish.

These would be the “cattle munchers”, slicing up cattle and always looking for that perfect burger recipe on a galactic scale. Just kidding, we can probably, and hopefully, drop that idea. 🙂

By scaling down the technology, the tiny probes can be powered by hydrogen atoms and these are abundant in space. This would radically affect their “spread” and allow them to reproduce much faster. 100 nanoprobes launched into space would need only four light-years to create 10 to the 33rd power, a decillion, offspring. (Four lightyears would be about the distance from our closest solar system, Afla Centauri.)

While individually these nano-probes would be very difficult to find, Osmanov speculates they could be seen collected in large swarms emitting light as they consume hydrogen.

Osmanov focuses more on the math behind the self-replication than explaining the purpose of these tiny nanoscale probes. As a possible explanation of the UFO phenomena, they cannot account for the physical metallic disc-shaped UFO observations or the solid Tic-Tac observations.

But what about the Fermi Paradox?

The Fermi Paradox struggles with…

The Fermi Paradox often comes up in conjunction to any ET speculative scenario.

The speculation for this article is that there is no paradox. The answer to the question “Where are all the aliens?” (posed by the Fermi Paradox) is simply – they are here but we’re not yet been able to identify them. Exiting and a bit scary at the same time.

If you want to read up more on the Fermi Paradox, I go into more detail in this post. There are many interesting solutions to the Fermi Paradox. In his book “Universe Is Teeming with Aliens … WHERE IS EVERYBODY?” Stephen Webb explores 75 different proposed solutions. You can pick it up at Amazon here.

Be warned, this is speculation territory for sure.

What the concept of the von Neumann Probes does is that it shows us neither the level of technology required nor the vast distances in space become insurmountable obstacles. I find this very interesting and humans might in the future use von Neumann Probes to explore our end of the galaxy. The concept does not require FTL-drives (faster than light drives) or space folding that are common tropes in fiction to get around the problem of distances. However this is also a downside for communications, the civilization that sent out the explorers will need to wait a seriously long time to get any information from the probes relay network without FTL technology.

How well does the concept of von Neumann Probes fit the observable UFO phenomena?

There might not be any von Neumann Probes in the UFO Shop here on the site, but many other cool UFO-themed products. Check it out. And have a good day!

My name is Goran Eliasson, I live in Sweden with my wife and our two boys. In our family Gaming and Star Wars are shared interest among the boys, myself included.

I’ve always liked the Sci-Fi genre, the possibility of a fantastical future and technological progress. Another closely related interest is space and I’ve probably seen most of the space documentaries out there.

More recently I decided to write a blog about the UFO phenomena. It’s a fascinating mystery with big implications and room for a lot of speculation. But I want to separate speculation, circumstantial evidence, and real evidence (none so far :)) in the articles. I’m not a Ufologist, just a curious individual who enjoys the topic