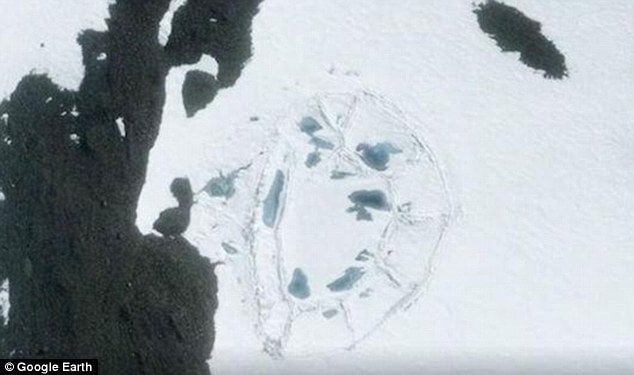 Back in January 2012, a mysterious dome structure appeared out of nowhere in the icy continent of Antarctica.
It is believed by many that this Mysterious Dome Structure could be home to an entire ancient civilization.

The discovery of the Dome structure that is approximately 400 feet across and man made added to the mounting list of evidence that claims that this discovery could allegedly be a hidden city frozen underneath the surface.
The unfavorable living conditions of Antarctica makes it a difficult place to inhabit.

It has been estimated that the continent adopted its climate 6,000 years ago and it has been ever since.
At first, it was suspected by the scientists that this mysterious dome structure could be Sastrugi- sharp grooves formed on snow by strong winds.
However, interestingly, this phenomena generally has a short, sharp, edges and the mystery structure appears to be oval.

Though the rumors of a lost ancient civilization underneath the ice have been circulating for years, these claims came forward only a few months after a huge pyramid-like shape was found in the icy continent.

As per the researchers, the mysterious structure covers 151 Miles across and could be buried 848 meters underneath the land.
It has been suggested by certain conspiracy theorists that Antarctica is home to the ancient lost city of Atlantis.

A conspiracy theory alleges that Antarctica was ice-free ages ago and it was not hostile to humans back then.
Meaning that a society could have existed and lived there before the last ice age which eventually froze the continent.
Interestingly, this society could have been Atlantis, a lost legendary ancient city discovered by people who were half humans and half Gods.
The only primary sources for Atlantis are Plato’s dialogues, a Greek Philosopher.

The mysterious discovery has also been linked to the ancient ruins found in South Africa because of the uncanny resemblance in shape and appearance.
Interestingly, the ancient ruins found in South Africa are surrounded by several gold mines.
It has been suggested by the researchers that a vanished civilization from the distant past, could have lived and proposed in that part of the world while mining gold.
This and other shreds point to the Ancient Anunnaki.

It is believed by the researchers that the ancient Anunnaki city was built between 160,000 and 200,000 BC as a part of an even larger community of approximately 10,000 Square kilometers.
Curiously, there are numerous ancient maps that depict parts of Antarctica free of ice.
One of the most controversial maps was without a doubt composed in 1513, by Turkish Admiral Piri Reis who drew a map that would create a global debate over 500 years after him.
The map depicts Antarctica which was discovered between 1818-1820.
But how is this possible?

While observing the image, it is easy to notice how the ‘rings’ of the structure resemble a structure in ruins as if we were looking at walls that have been destroyed, collapsed ruins that have been covered by snow and ice.
The image taken in 2012 clearly resembles something that may easily have been designed by someone.

But designed by whom that to in one of the most remote and untouched places on Earth, eastern Antarctica will remain a mystery