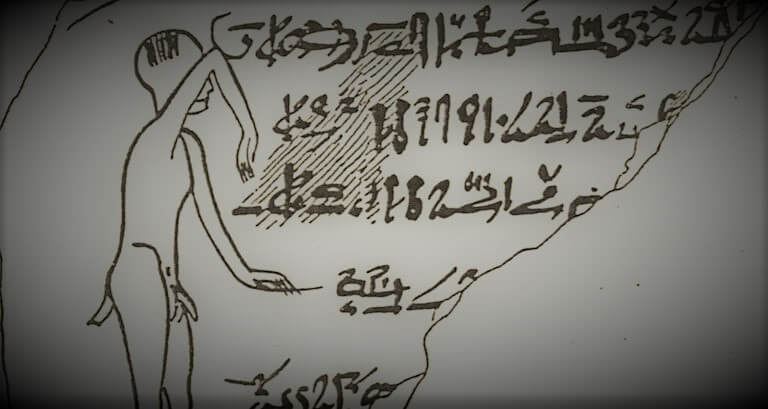 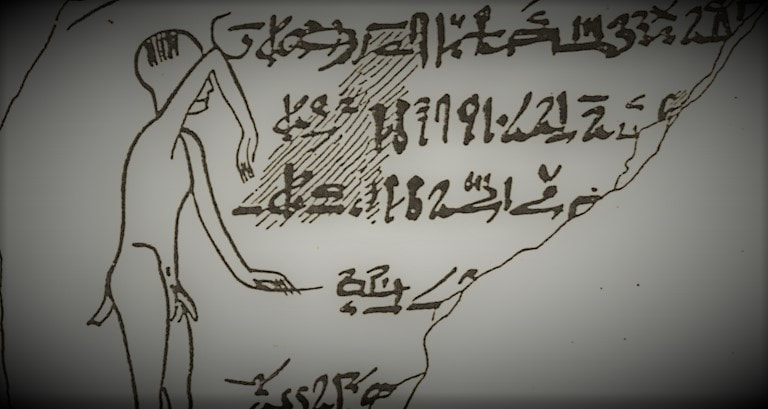 The first account of this event, written by a scribe and temple minister, describes awe, fear and bewilderment. The second account describes a meeting between the scribes and priests of the temples of Horus and Osiris, who discussed the incident. 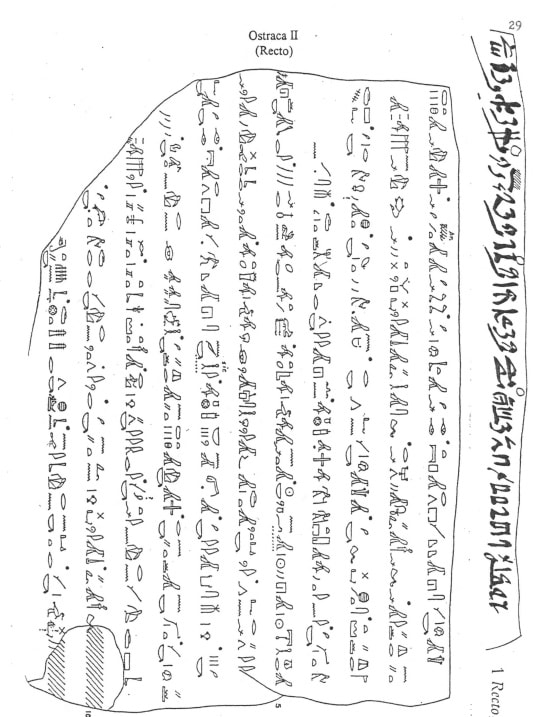 Two limestone slabs known to Egyptologists as Ostraca
These two ancient texts (reports) were discovered by archaeologists in about 1890-1920, during the excavation of Ramesside on the ruins of the city of Oyast (Thebes). They were written in hieratic script (hieratic script is one of the forms of Egyptian writing used to write texts in Egyptian.)
​
The official archeology ignored the facts stated in the records, because they did not like their content, which could cause controversy unnecessary to science in society. It is because of their content that they are not known to the general public, and among the official archaeologists there is mention of them that they do not deserve attention, since they describe the well-known rituals of the priests of that period. 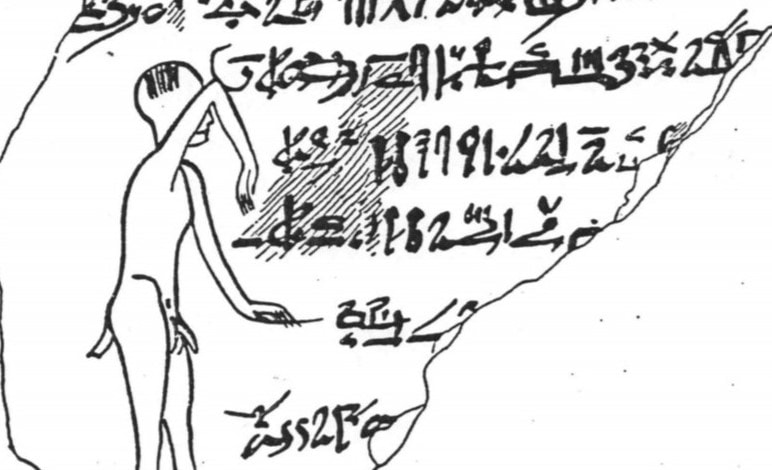 Main cities in the report:
​Oyast : Center of the “two lands”. The area of ​​the huge temple of Amun Ra, the dominant god Kam-T. Oyast was also a city of ships and archives.
Anna: An important settlement in the north, it was located north of present-day Cairo. Previously, Anna was the capital of Kam-Ti and the home of the sun god Ra. When the government changed, the new capital moved to Oyast.
Tartes : a city in the north, in the delta (from 31/31 degrees to 30/32 degrees), later called by the Greeks Tanis, is located near the Sma Behut region. Sma Beshut is swampy. There is also the Sma-Behut area near the town of Leb (Edfu), although it seems that the southern part of Sma-Behut is not swampy, like the delta, and may have been near Hennu, a red granite and limestone quarry.
The mention of flooding and deaths in Tart will determine the flooding time – July 29th. It is logical to assume that flooding is more likely in an area close to Aat Ab or the city of Zeb than a path northward near Tettu, in any case, the anomaly moved everywhere. 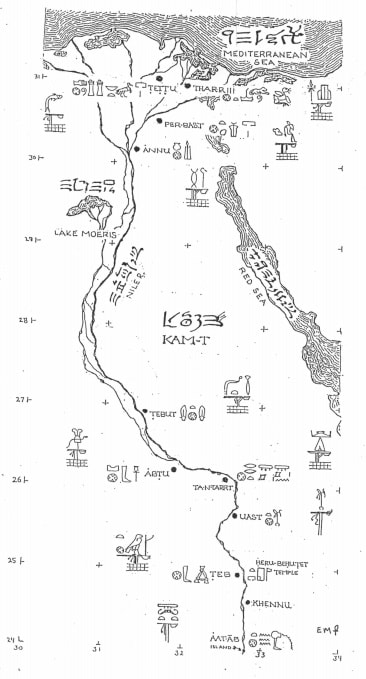 ​Translation of the report
​Greetings, S-hakk (S -hakķ means: Destroy; pierce; a creature that has the personification of torment; the embodiment of evil) coming out of September (September or Sirius ascent in the heavens around July 29).
In the beginning, we greeted you with awe as a god. You are big and you have huge eyes in the front. At night your eyes shine brightly. Your body is oval. With your mouth sticking out your tongue, you swallow your servants who appeared from the west. You get angry and release rays of light and shine.
Explanation: Eyewitnesses see a very large UFO with bright lights in the sky. The object is disc-shaped. Very bright lights are on in the front. Several other smaller UFOs appear from the west, which fly towards the parent UFO and are pulled inward by attracting beams of light. After that, the mother UFO begins to release thin beams of light and increase the brightness of the lights.
In the main temple, the high priests were gathered, who performed rituals and brought offerings to S-hak “The Destroyer”.
This meeting was attended by the scribe Kaya, who recorded everything that happened. Witnesses who saw the “Demon” in the sky were invited, among whom were both ordinary citizens and priests and people of high rank. The witnesses presented their observations.
According to the testimony of all those who saw it, the “exterminator” had two or more points of illumination. Everyone said they saw “a face with burning eyes.” There were two “legs” in the tail section. Smaller objects flew to the main object from the west, which it “swallowed”. The maternal UFO is oval (disc-shaped).
The UFO moved across the sky from east to west. Others reported that the smaller ships were “catching people and animals.”
Eyewitnesses reported that before the capture, the victims had some kind of impact, people grabbed their ears and fell, after which they were taken away. Animals also fell. For humans and animals, “demons” “cut tongues” (organ harvesting). The victims did not resist (fell into a state of shock).
UFOs appeared in different places night and day or around the clock. It first appeared at night, but was observed at different times of the day.
The ships of the “Destroyer” continued to plow the sky, taking people and animals, which the priests considered a slap in the face to the supreme god Amon-Ra. They began to hold ceremonies of worship to the “Destroyer” with entreaties and humility “If you decide to stay, we will get used to living with you.”
The main ship of the “Destroyer” constantly changed its shape, color, appearance, brightness of lights, sometimes it became “blurred”, masked its appearance, became invisible. “He changed his skin,” the report says.
Moreover, the UFO demonstrated all this openly and even deliberately, “before the supreme rulers of power.” When he quickly picked up speed starting from a place – “he cut everything around and caused destruction, going into the sky.” UFO inflicted physical destruction and injury to people and buildings. Not astral, but physical destruction.
All who saw him associated his appearance with a “face” with “burning eyes” located in front. The appearance of the UFO caused awe among people.
In addition to burning eyes (searchlights or engines), and hind legs (paws?), The “Demon” also had a “tongue” with the help of which he grabbed people, cattle or objects from the ground, being in the sky at that time. This “language” is described as “can be visible or semi-visible”, apparently it is about a ray of light attracting objects (Attracting ray).
Interestingly, the priests arranged ceremonies for offering food to the “Demon” and the “Demon” took them with the help of this attracting ray.
As it happened, “Demon” and “Destroyer” were given a name that, if translated into a figurative language we understand, would sound like ” Hellraiser “.
UFOs appeared in different places, unexpectedly – “When you appear before people in the west, east, north and south (of the sky), gods …”. The UFO appeared randomly, in different places and to the cardinal points.
Also in the text there is a mention of an interesting feature, ” pulled out souls “, which is why he was associated with demons. HellRaiser constantly moved, the area of ​​its movements reached an area of ​​700 km. The priests and rulers had fears that the actions of the “Destroyer” would cause religious unrest, since the Egyptian gods did not help the Egyptians to get rid of this creature.
In addition to the destruction of buildings during a sharp start, the abduction of people and animals, the removal of organs and souls, the mother ship caused floods on the ground , which were catastrophic. 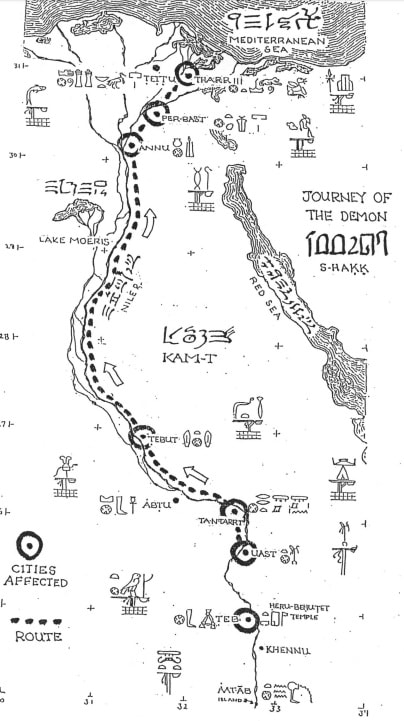 Main characteristics of the Alien Ship
​1. Front with two or more headlights.
2. rear engine.
3. The ability to travel across the sky in different directions.
4. Transfers objects from the ground or air to the bottom of the ship.
5. Abductions of people, livestock. Sometimes he returned the kidnapped people back.
6. Causes terrible fear in observers. It acts with an invisible weapon (people fall, pressing their hands to their ears, become weak-willed).
7. Visible both at night and during the day.
8. Cuts victims and maims.
9. Change of form during the day.
10. Extremely bright light.
11. Abrupt starts causing destruction on the surface of the earth ..
12. Leaves and returns to the original zone.
13. More than 700 kilometers of the observation area of ​​this object.
14. Travels from west to east and from east to west.
15. Caused social, religious unrest due to the flights and malicious actions of the Destroyer.
16. Caused the flood.
The listed “distinctive features” associated with the appearance of this particular object in ancient Egypt, with all desire, cannot be associated with natural or cosmic phenomena. 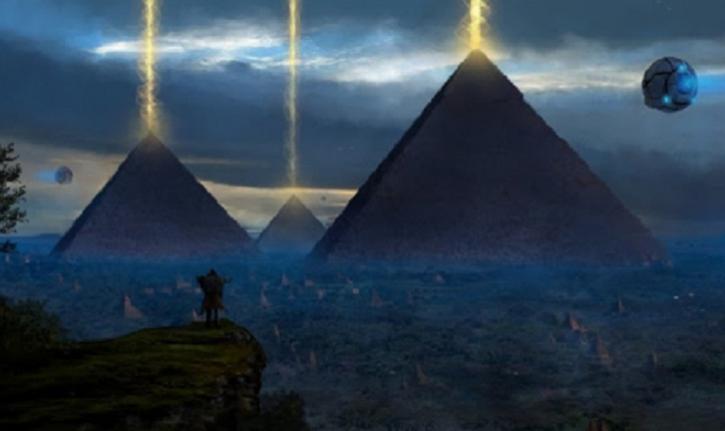 Document Archived at TheBlackVault.com. All Document copyrights attributed to their respective owners.