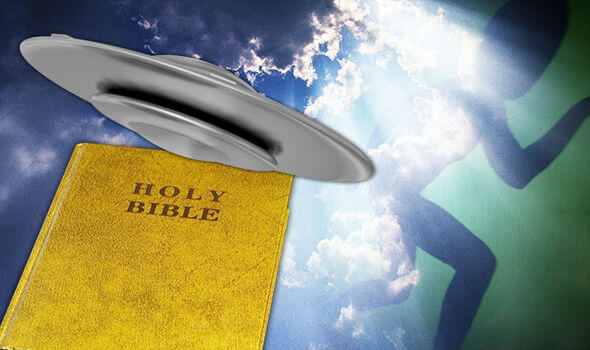 UFOS could be a sign from God, according to a shock theory that aliens are connected to Christianity.

The Reverend Barry Downing even claims many biblical events may have involved UFOs or aliens.

Mr Downing, who is Pastor emeritus of Northminster Presbyterian Church in Endwell, New York, penned the book, “The Bible and Flying Saucers,” which puts forth the argument.

And, in a new updated version just out, “Biblical UFO Revelations,” he continues to push the theory that many Biblical events, including the Burning Bush, could have been caused by alien visitors.

He said: “I believe UFOs are God’s way of saying to our godless culture: ‘I’m back!’ And if God is back, it is time to repent and be glad that the world lives under the umbrella of God’s love, with his angels looking over us.”

He goes on to question whether “the church has the eyes to see, to open the church doors to welcome our UFO strangers, or will we continue to be ‘unaware’?”

He added: “From my point of view… what we have here now in the skies, they’re part of the divine mission.”

The former reverend has never seen a UFO, but is convinced they are real.

He said: “I believe by ‘faith,’ in the same way I believe in the resurrection of Jesus by faith. I believe the reports.

“Except, I can question witnesses, which is even better than in the case of the resurrection.”

Although, his cousin has seen one – a tear-drop-shaped UFO which flew slowly over her house at night.

He said there was no noise until it hummed after stopping.

He added: “She said it gave off so much light that, even though dark, she could have read a newspaper.”

Mr Downing even thinks that a UFO could have caused the “fire” that never consumed the burning bush in front of Moses?

He said: “What is not amazing to me is not that we had a burning bush… we had a talking bush.

I believe UFOs are God’s way of saying to our godless culture: ‘I’m back!’ And if God is back, it is time to repent and be glad that the world lives under the umbrella of God’s love, with his angels looking over us.

“A voice came to Moses from the bush.”

He has also looked at the book of Exodus, including the cloud that moved with the Israelites.

He said: “The cloud of fire moves… you know… it goes in front of them then it stops and moves some more.

“After they get to Mount Sinai and build the tabernacle, the house of worship for the Jewish people, it hovers over the tabernacle.”

On the cover of the latest book – the original was published in 1968 – there is an image of Moses watching the Red Sea part with a shiny UFO above the waters.

He is also convinced a UFO turned up during the 100th anniversary of the apparitions of the Virgin Mary in Fatima, Portugal, earlier this month.

He said: ““The UFO got in the way of the sun, causing the earth to seem darker, and this would make the ball of light show up even more.

“Church people have trouble with what I’m doing. People who’ve seen UFOs have no problem.

“It represents an inversion of the old story of Galileo and the Catholic Church.

“Because in that story, the church authorities were squelching a scientist. What we have here are scientists squelching the religious stories.”

Mr Downing has many critics within Christianity, however, he is far from the first to push forward a theory about aliens visiting Earth for thousands of years.

Many ufologists claim to have found pictures that resemble flying saucers in the air in religious works of art.

And the Ancient Aliens theory claims advanced visitors from out of space came down thousands of years ago to help build monuments like the Pyramids of Giza.