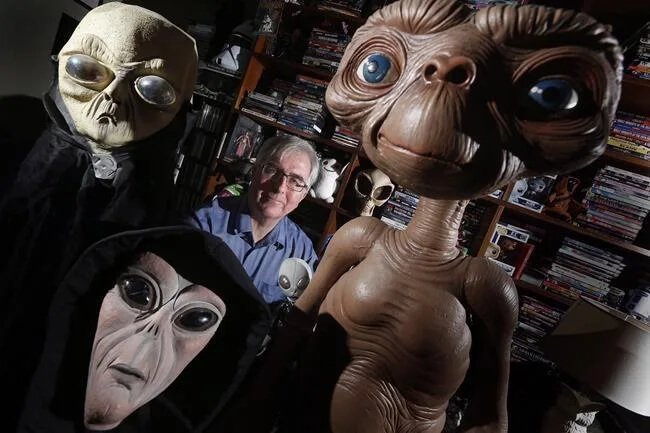 A blinding flash of light, something unidentified overhead or aliens at the door. Somewhere the truth is out there.

Canadians appear to be seeing more “out there” while scanning the night skies in increasing numbers. The COVID-19 pandemic has people spending more time outdoors, which has led to a growing interest in astronomy and unusual calls to RCMP 911 dispatchers.

The Alberta centers received nearly 900,000 calls last year, and it’s the unusual ones — not requiring police, fire or EMS to be sent out — that tend to stand out in the minds of the 160 dispatchers.

“We were getting a lot of calls with the SpaceX satellite launches. They’re a very specific pattern in the sky, they’re not hitting the ground, and we can just explain very quickly to people that there are actual satellites in there.”

Duval said there are some people who are convinced that aliens have already landed and are trying to break into their homes.

“It makes you chuckle (and) you say, ‘No, I’m pretty sure you’re all right’. People do think that,” she said.

“We have situations where people are (saying) … ‘No, it’s legit. The aliens are coming.’ Sometimes it’s making sure that they don’t actually have someone breaking into their house when they’re mistaking it for some extraterrestrial kind of experience.”

Evan Davis of Shellbrook, Sask., had his own close encounter while driving to work early in the morning in late February.

“It was just kind of twilight. The sun was coming up behind me and all of a sudden there was a flash. And then there was this big, huge fireball and it was leaving a lit trail that stayed for a second or two behind it as it fell,” Davis said.

“It’s something I won’t forget. It was spectacular and the whole thing lasted about six or seven seconds total. It lit up the whole sky and then it was gone.”

A comet fragment burning up in the Earth’s atmosphere did light up the early-morning sky over Alberta and Saskatchewan in February.

Winnipeg-based Ufology Research released a survey in March that indicated sightings of UFOs across Canada — levitating discs, erratic lights and floating triangular objects — increased by 46 per cent in 2020.

The center’s Chris Rutkowski said the total of 1,243 sightings is one of the highest recorded in a single year.

A longtime astronomer suggests people are simply watching the night sky more during the pandemic.

“It’s been a real resurgence in astronomy,” said Ron Waldron, president of the Royal Astronomical Society of Canada in Saskatoon, who noted telescopes are in short supply.

“People are suddenly noticing the night sky. They haven’t taken the time to notice it before, so what astronomers have been watching for years, and know exactly what it is, people are now looking up and saying, ‘I don’t know what that is, so it must be a UFO.'”

Waldron said more satellites are being launched “much to the bane of astronomers” and are visible to the human eye. So is the International Space Station on a clear night.

“(People) aren’t necessarily able to interpret what they’re seeing. There are no more unidentified flying objects up there during the pandemic than there were before.”

This report by The Canadian Press was first published May 2, 2021.