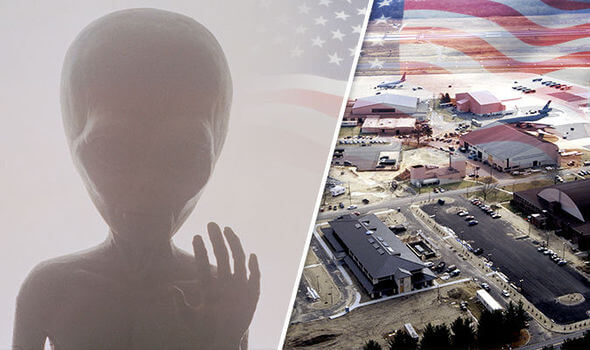 UFOs were reported flying near the McGuire Air Force Base and nearby Fort Dix Base in Trenton, New Jersey, before state Police requested entry to investigate.

But the events which allegedly then unfolded go way beyond the traditional UFO sighting.

It is claimed a military police officer based at Fort Dix reported seeing “a low-flying object pass over his car” as he drove.

After braking, he claimed to see in front of his car “a small being with a large head, black eyes, and a very slender body”.

He claims he panicked, got out of the car and pulled out a .45 automatic gun, before demanding the being lay on the floor.

But, after his request was ignored, he fired a number of shots.

The wounded creature is alleged to have jumped a fence into the McGuire base before heading down a runway.

But, according to the case, it then collapsed dead.

Sgt Jeff Morse is listed as a witness who allowed police access to the scene.

But it is alleged that this was a pseudonym he was given to avoid his true identity getting out.

According to omni.media, police found: “The body, crouched in a fetal position, not breathing.

“It was indeed dead. Shocked, but keeping with protocol, they began to rope off the area.

The case of the alleged alien shooting has never been fully explained or debunked.

“Suddenly, a group of military officers in blue berets arrived, distancing Morse from the area.

“Morse watched on from afar as this new group clad in blue berets, whom he’d never seen before, seemed to take charge of the situation.”

Morse was quoted by Mr Springfield as saying he was “never close enough to observe details such as facial features, or its hands and feet”.

However, he remembered “that, under the glare of truck headlights, the skin of the unclad, hairless body was wet, shiny, and snake-like”.

“The entity was about four feet in height with a large head, slender torso, thin arms and legs, and overall, of grayish-brown coloration,” he added.

Mr Springfield said: “While on patrol, Morse watched the Blue Beret specialists spray the corpse from a portable tank and cover it with a white sheet.

“Before the body was carefully placed onto a platform and a wooden frame built around it.

“This was finally placed into a large square silver metal container, about 10 x 10 feet with indistinguishable blue markings.”

While on patrol, Morse watched the Blue Beret specialists spray the corpse from a portable tank and cover it with a white sheet.

He said he was told that after this, a C-141 cargo aircraft landed on site, the being was loaded on board, and it has been suspected that it took off towards Wright-Patterson Air Force Base in Dayton, Ohio.

Conspiracy theorists claim this is the same base where alien bodies from the alleged 1947 Roswell UFO crash were secretly taken.

The claim is that Mr Morse and the police officer were separated and warned never to speak of the incident again or risk losing their jobs.

According to UFO researchers Mr Morse and other witnesses had to later go to Wright Patterson where they were interrogated.

Mr Morse said years later: “They told me about my duty to keep my mouth shut… I signed a form and it is supposed to bind me for life.”

He is said to have claimed he has been “reminded” never to speak of the event.

In an article it asked: “So did a panicked, trigger-happy MP actually shoot and kill an alien that night?

“The truth may never be known. The lid on this and so many other apparent incidents of this ilk have been so tightly wound shut, that those involved fear the worst for their jobs, and perhaps even their lives.

“But if this case of an alien termination is true, then we have more to fear than just military threats.