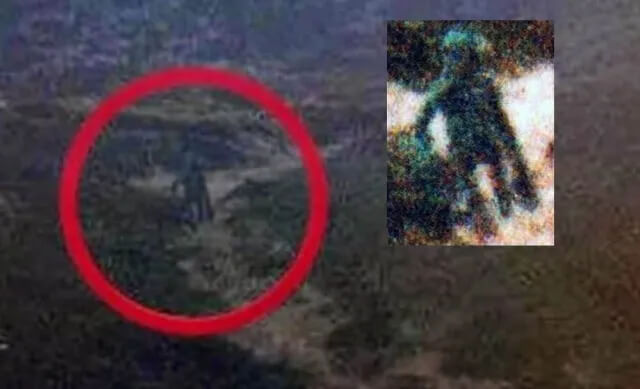 The most famous ufological incident in the UK is considered to be the Rendlesham Forest UFO incident, followed by the incident of the Ilkley Moore alien creature, which we will discuss below.

A retired British police officer named Philip Spencer never thought that one fine morning he would collide with an alien entity and capture it on his camera.

It happened on December 1, 1987. Spencer left his home in Ilkley early in the morning to meet his father-in-law, who lived on the other side of the region.

Ilkley Moore is a mountainous moorland and wildlife preserve in Yorkshire, England, with a wide variety of birds, hiking trails, and tranquil views.

Its main attractions are boulders decorated with intricate carvings dating back to the Bronze Age, and it is also famous for legends of strange creatures wandering in the dark and mysterious lights making their way through the fog.

The site is located just 21 miles from the British Air Force Base Menwith on a hill over which UFOs have been spotted at least several times.

It was still very dark when Spencer drove along the road past the picturesque wastelands, immersed in dense fog. He had a camera on his seat next to him, as he hoped to take pictures of local landscapes on the way.

When Spencer drove past a place called White Wells, he suddenly noticed a strange creature on the side of the path with very long arms that almost reached the ground. The creature reminded him of a “monkey in socks” – a popular plush toy.

To further surprise Spencer, when he looked in the direction of this creature, the creature moved and waved a hand, as if greeting Spencer. The next moment the man grabbed his camera and managed to take only one unfocused picture before the strange creature disappeared somewhere.

According to Spencer, the creature had large black eyes, pointed ears, and oddly long arms. He also described its short legs and feet, which had only two toes, making them look like a forked hoof.

What happened next shocked the Briton even more. He jumped out of his car and ran in the direction where the creature had stood before, he wanted to get a better look at it.

Alas, he never found it, but he saw how a domed object flew up from the swamps nearby and disappeared into the dark sky.

Spencer was confused because he had never seen anything like it and even knew little about UFOs and other paranormal phenomena.

He continued on his way and when he arrived in the village to see his father-in-law, he found out that he had “lost” two hours of his time somewhere. He arrived there at about 10 am, and according to his calculations, he should have been there by 8 am. Spencer had no idea where those two hours had gone.

At first, he believed that he had dreamed of a creature in the swamp, you never know what might appear in the fog. But then he decided to see the photo he had taken and saw the very creature on it. It was shot very vaguely, but it was still visible.

Later, this picture was repeatedly checked by various specialists and they did not find any signs of photo editing there, recognizing the picture as genuine.

“I have been eager to do this analysis for many years. We are also trying to involve other people and take a close look at the evidence. And it’s not just this photo – there have been reports of strange phenomena in the area for many years.

Last week I spoke with some Americans, and they told me that they consider this Ilkley case to be secondary after the Roswell case in the United States as proof of the existence of aliens, “Mortimer said.

However, after observation and snapshot, Spencer’s strangeness did not end. After the incident, Spencer began to have strange dreams in which he saw the starry sky. Then he wondered what could have happened to him in the missed time and when he consulted with a couple of ufologists they advised him to undergo a session of regressive hypnosis.

During the session, Spencer “remembered” that after he photographed this creature, it did not disappear, but in fact, came very close to him:

“I’m walking through the swamp. Oh! It’s pretty windy here. There are many clouds. When I walk up to the trees, I see something, I can say it’s green. It’s moving towards me. Oh! I can’t move, I’m frozen! It’s all still coming towards me. And I still cannot move … I am paralyzed and everything has become indistinct. And now I … am floating through the air …

It turns out that these creatures kidnapped Spencer and carried him to their ship. Then Spencer recalled that he was examined inside the ship, and these green creatures then showed him a film about the catastrophe that will happen on Earth if people do not stop population growth and environmental pollution.

After that, he was returned back to the swamp, blocking his memories of the abduction.

In the years that followed, Philip Spencer is one of the few abductees who have produced evidence to support his encounter with aliens.

What do you guys think about The Ilkley Moore alien creature?