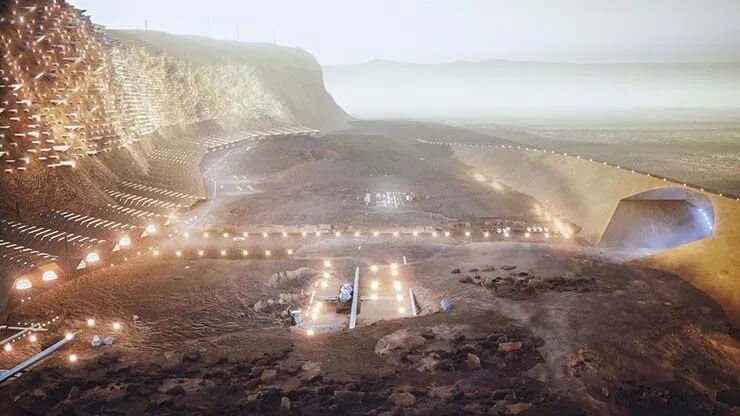 Plans for the first sustainable city on Mars have already been revealed and along with that SETI institute has also claimed that Alien life exists on Mars.
International architecture studio ABIBOO has submitted a design for more than five Martian cities, including the space capital of Nüwa.
Nüwa will act as a functional city and will house a large number of offices, homes, and green areas.
The capital is expected to be built near a cliff to protect the inhabitants from any radiation or atmospheric pressure.
According to EuroNews reports, oxygen is to be produced largely by plants, food will be 90% plant-based, and energy will be generated from solar panels.
CO2 and water will be readily available on the planet’s surface.

Alfredo Muñoz, founder of the ABIBOO architecture studio, said they had to analyze a lot of data and work with scientists to try to understand what circumstances the settlers were facing.
One of the challenges is gravity, which is only one-third that of Earth.
ABIBOO, together with The Mars Society and SONet Network, has developed a fully scientifically researched design for the City of Mars project focused on sustainability.
And all things considered, construction can begin as early as 2054, which means that Mars will receive its first community by 2100.
What no one has taken into account, however, is that such a community could have some unexpected neighbors.

In an article published by the scientific journal Nature Astronomy, Dr. Nathalie Cabrol, director of the Carl Sagan Research Center at the SETI Institute, challenges the assumptions about the possibility of modern life on Mars by the scientific community.
While the Perseverance rover is traveling in search of signs of extraterrestrial life in the 3.7 billion-year-old Jezero crater, Dr. Cabrol theorizes that not only could life be present on Mars today, but it could also be very more widespread and accessible than previously believed.

Their findings are based on years of exploration of the first Mars analogs in extreme environments in the Chilean highlands and the Andes funded by NASA’s Institute of Astrobiology.

In extreme environments, while water is an essential condition, it is far from sufficient which matters the most, says Dr. Cabrol.

“You can walk in the same landscape for miles and find nothing. So maybe because the slope changes by a fraction of a degree, the texture or mineralogy of the soil is different because there is more protection against UV rays, suddenly life is here. What matters in extreme worlds to find life is to understand the patterns resulting from these interactions. Following the water is good. Following the patterns is better. “

This interaction unlocks the distribution and abundance of life in those landscapes.
That doesn’t necessarily make it easier to find, as the latest harbors for microbes in extreme environments can be at the micro- or nanoscale within the cracks of the crystals.
On the other hand, observations made on terrestrial analogs suggest that these interactions considerably expand the potential territory for modern life on Mars and could bring it closer to the surface than was long theorized.

If Mars still harbors life today, which Dr. Cabrol believes to find it we must take the approach of Mars as a biosphere.
As such, the distribution and abundance of its microbial habitat are closely related not only to where life could theoretically survive today, but also where it was able to disperse and adapt throughout the planet’s history, and the keys of this dispersion are found in early geological times.
Before Noah’s transition, 3.7 or 3.5 billion years ago, rivers, oceans, wind, dust storms would have carried him to all parts of the planet.

But a biosphere cannot function without an engine.
The director of the Carl Sagan Research Center proposes that the engine to sustain modern life on Mars still exists, that it is more than 4 billion years old, and that today it has been lost from sight, underground.
If this is correct, these observations may modify our definition of what we call “Special Regions” to include the interaction of extreme environmental factors as a critical element, one that potentially expands their distribution substantially and could make us rethink how to address them.

The problem here is that we do not yet have global environmental data at a scale and resolution that are important for understanding modern microbial habitability on Mars.
As human exploration gives us a deadline to recover pristine samples, Dr. Cabrol suggests options regarding the search for existing life, including the type of missions that could meet critical objectives for astrobiology, human exploration, and planetary protection.

And if so, and life is present on the red planet, then many of the NASA images showing strange creatures could be real.
Then, the Martian colonists will be forced to deal with alien life on Mars, which could have evolved in caves.

What kinds of creatures will the colonists meet on Mars?