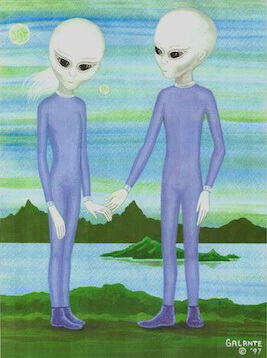 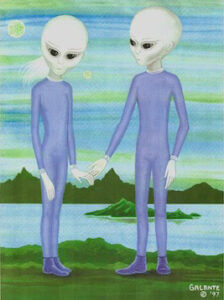 What we call “aliens” are hyper-dimensional beings. They hide behind the veil of our perceptions and can project themselves into our visible reality at will. They are not recent visitors to earth, but have been here for hundreds of thousands of years and continue to live here, mostly in underground bases. Some “aliens” helped genetically engineer the human race, while other factions later crippled human genetics in order to turn mankind into little more than a source of physical and etheric food. Today, those interacting with humanity via abductions have a negative orientation and intend to create a race of human-alien hybrids capable of ruling over humanity while having total allegiance to the interdimensional alien empire. Literature tends to identify these negative “aliens” as the reptilians, grays, mantids, and some hostile Nordic factions. There exist positively oriented beings as well, notably the more positive Nordics, but they respect the law of freewill and do not engage in physical abductions. Rather they exist as a spiritual brotherhood lending their service to protect and guide those of us who seek freedom from the limitations of this 3D matrix control system, prison/school earth.

They preside over lower (human) levels of the control system: