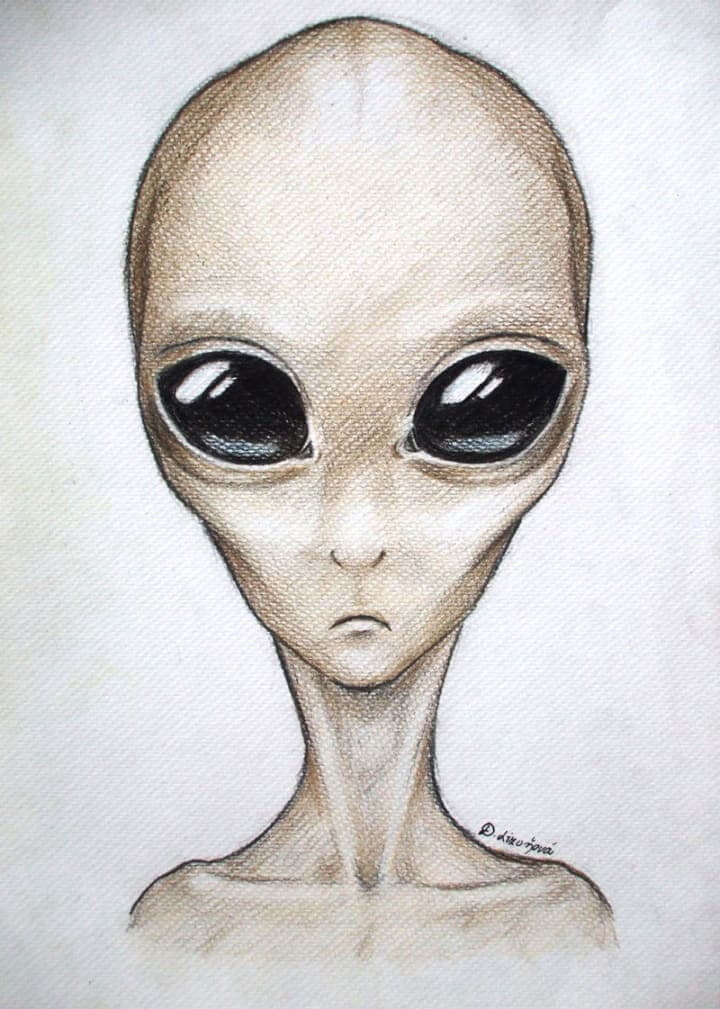 by Ryan Sprague 4 years ago

Did the U.S. Air Force Shoot & Kill a Runaway Alien?

It was on the morning of January 18th, 1978, when New Jersey State Police requested entry onto McGuire Air Force Base. Along with the adjacent Fort Dix Base, UFOs had been reported earlier in the evening. But what the police said they were looking for was far stranger than just lights in the sky.

When asked just exactly why the state troopers needed access to the base, they explained that an MP at Fort Dix had seen a low-flying object that had passed over his car. As he looked back to the road below, he hit the breaks in a panic. Standing in front of his vehicle in the headlights was a small being with a large head, black eyes, and a very slender body. The MP panicked, getting out of the car and pulling his .45 automatic. He demanded that the being lay on the ground, and when it didn’t comply, he began to shoot.

Wounded, the being fled the scene, supposedly hopping the fence between the bases, ran down a deserted airfield runway at McGuire, and eventually fell to the ground, dying. The guard on duty at this point, one Sgt. Jeff Morse (presumably a pseudonym) allowed the police onto the runway to search for the being. There, they found the body, crouched in a fetal position, not breathing. It was indeed dead. Shocked, but keeping with protocol, they began to rope off the area. Suddenly, a group of military officers in blue berets arrived, distancing Morse from the area. Morse watched on from afar as this new group clad in blue berets, whom he’d never seen before, seemed to take charge of the situation.

McGuire AFB where the incident occurred

UFO researcher, Leonard Springfield once interviewed Morse about the being itself. Springfield stated the following about how Morse described it:

“Never close enough to observe details such as facial features, or its hands and feet, he did recall that, under the glare of truck headlights, the skin of the unclad, hairless body was wet, shiny, and snake-like. The entity was about four feet in height with a large head, slender torso, thin arms and legs, and overall, of grayish-brown coloration.”

Sketch similar to that of the being observed

Springfield also inquired about the retrieval operation itself as these blue beret officers worked their secretive magic. Springfield stated that:

“While on patrol, Morse watched the Blue Beret specialists spray the corpse from a portable tank and cover it with a white sheet. Before the body was carefully placed onto a platform and a wooden frame built around it. This was finally placed into a large square silver metal container, about 10 x 10 feet with indistinguishable blue markings.”

After this, a C-141 cargo aircraft landed on site, the being was loaded on board, and it has been suspected that it took off towards Wright-Patterson Air Force Base. (Supposedly the same base that the 1947 Roswell crash bodies were shipped off to.) Morse and the police officer were separated and both were told that if they ever spoke of what they’d seen that day, they would immediately be stripped of their duties in their respective jobs.

It was two days later when Morse and a few other witnesses were shipped off to Wright Patterson and received intense interrogations. In statements by Morse many years later, he stated that: “They told me about my duty to keep my mouth shut… I signed a form and it is supposed to bind me for life.”

Morse was brought back to McGuire AFB, debriefed by his superiors and the incident was never spoken of again after that. It didn’t take long for Morse to start asking around about just exactly what he’d seen that night by other witnesses. When word of this got to his superiors, many of the witnesses were shipped overseas, including Morse who soon found himself in Okinawa on desk duty. To this day, he admits that he’s been constantly threatened not to speak of the event and that the military has gone to great lengths to keep him quiet, including personality and professional attacks, making it difficult for Morse to find employment in the law enforcement sector.

If this wasn’t extraordinary enough, another key witness came forward to corroborate this event. Major George Filer, now retired, was stationed at McGuire at the time as an intelligence officer. While not being present at the actual incident, he heard first-hand about it the following morning. In an interview with Katelynn Raymer and David Ruppe of ABC News, Filer stated that: “Our security police went out there and found him [the alien body] at the end of the runway dead. They asked me to brief the general staff.”

While this briefing was later canceled, Filer remained convinced that this event was truly bizarre, and the joint bases were doing everything in their power to contain it and keep everyone silent. While he couldn’t prove that this alien being was of extraterrestrial origin, word around the base continued to spread, and all were convinced that this was a genuine UFO landing of some sort and the subsequent death of its extraterrestrial occupant.

So did a panicked, trigger-happy MP actually shoot and kill an alien that night? The truth may never be known. The lid on this and so many other apparent incidents of this ilk have been so tightly wound shut, that those involved fear the worst for their jobs, and perhaps even their lives. But if this case of an alien termination is true, then we have more to fear than just military threats. We have an alien race expecting one of their own to eventually come home. They just probably weren’t expecting it to be in a body bag.