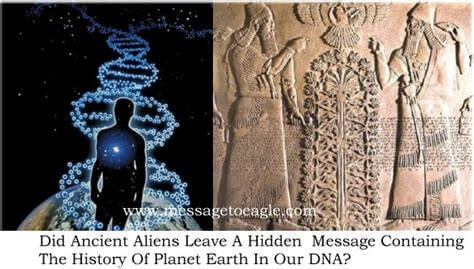 Researchers who worked for 13 years in the Human Genome Project indicate that they came across an amazing scientific discovery: They believe that the so-called 97% of non-coding sequences in the human DNA is nothing less than the genetic code of extraterrestrial life forms. Originally referred to as “Junk DNA” its function remained a mystery for researchers. Now researchers believe that our DNA is extraterrestrial in origin.

After extensive analysis with the help of other researchers in diverse fields such as mathematics, chemistry and programming, Maxim A. Makukov of the Fesenkov Astrophysical Institute have ventured out and asked if there is a possibility that, what we call “junk DNA” is actually some sort of extraterrestrial code, created by an “Alien” programmer.

According to researchers from Kazakhstan, “Our hypothesis is that a more advanced extraterrestrial civilization was engaged in creating new life and planting it on various planets. Earth is just one of them.”
The researchers indicate that “What we see in our DNA is a program consisting of two versions, a giant structured code, and a simple or basic code.”

The team of researchers believes for a fact that the first part of our DNA code was not written on Earth and according to them it is verifiable. Secondly and most importantly, genes alone are not enough to explain the evolution/abrupt evolution process and there must be something more in ‘the game’.

According to Makukov “Sooner or later,” “we have to accept the fact that all life on Earth carries the genetic code of our extraterrestrial cousins and that evolution is not what we think it is.”

The implications of these scientific findings reinforce claims by other individuals and observers that claim to have had contact with aliens that look like humans. Human-like aliens could have provided some of the genetic material necessary for human evolution.

Quote from News.Discovery: This interpretation leads them to a farfetched conclusion: that the genetic code, “appears that it was invented outside the solar system already several billions years ago.” This statement endorses the idea of panspermia, the hypothesis that Earth was seeded with interstellar life. It’s certainly a novel and bold approach to galaxy conquest if we imagine this was a deliberate Johnny Appleseed endeavor by super-beings

Researchers in Kazakhstan believe that the human DNA was encoded with an alien signal for an ancient extraterrestrial civilization, and they refer to it as “Biological SETI”. The mathematical code in the human DNA cannot be explained by evolution. Basically, we are living and breathing holders of some sort of alien message that can be used, in a much more efficient way than using Radio-signals, to search for Extraterrestrial life.

Once the code had been set, it would remain unchanged in cosmological time-scales, in fact, researchers believe that our DNA is the most durable “construction” known, and that is why it represents an exceptionally reliable and intelligent storage for an alien signature, according to an article in the journal Icaurs.

Writing in the journal Icarus, they assert: “Once fixed, the code might stay unchanged over cosmological timescales; in fact, it is the most durable construct known. Therefore it represents an exceptionally reliable storage for an intelligent signature. Once the genome is appropriately rewritten the new code with a signature will stay frozen in the cell and its progeny, which might then be delivered through space and time.”

Scientists believe that the human DNA is arranged in such a precise way that it reveals a “set of arithmetic patterns and ideographic symbolic language”. These studies have led scientists to believe that we were literally invented “outside of Earth” several billions of years ago.

These ideas or beliefs are anything but accepted in the scientific community. Yet these studies have proven what some researchers have talked about for decades, that evolution could not have happened on its own, and that there is something extraterrestrial to our entire species. Is our entire history wrong?

The realm of what we including scientists don’t understand is enormous and I think it is arrogant and egotistical on the part of scientists to simply write things off as “Junk.” Just because they can’t find anything useful of the DNA that seems empty and useless doesn’t mean that’s the last and final word. Due to scientists limitations and narrowly constructed theories they could easily be overlooking and not aware of what’s really there in the seemingly Junk DNA. Most of the world, scientists included think mainly on a linear way which makes it easy for them to disregard anything that doesn’t fit in their line of thinking. Take for instance “Beyond Time and Space.” This is something that can’t be proven to exist with mathematical equations, theories, or written formulas. However, one time in my life I personally experienced being in this consciousness state of being and while I was there I felt the incredible undeniable experience of the vibration and power of creation and it was so overwhelmingly beautiful that I didn’t ever want to come back, but that wasn’t up to me as I was slowly slipping away to the speed of light and I was back. Oh how I wish I could figure out how I got there, but the more important thing is I was there and am ever grateful for that experience and that one time experience engraved a place in my heart for the rest of my life which changed me forever on. There are so many things that don’t fit in the limited mind, but there is a greater force that keeps this universe together.