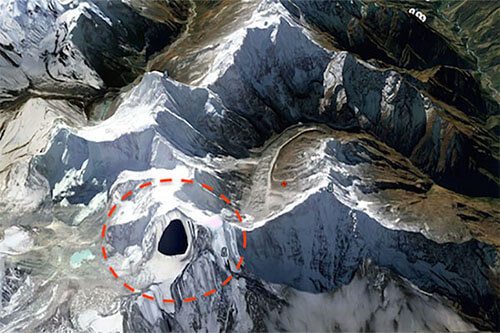 Recently, however, a new technology by the name of LIDAR (a method for determining ranges (variable distance) by targeting an object with a laser and measuring the time for the reflected light to return to the receiver. Lidar can also be used to make digital 3-D representations of areas on the earth’s surface and ocean bottom, due to differences in laser return times, and by varying laser wavelengths. It has terrestrial, airborne, and mobile applications.) was employed to scan out the surrounding areas perfectly and through it, experts were able to uncover a mysterious alien base in the Himalayan Mountains. This discovery was made by a YouTuber by the name of MexicoGeek back in 2016 as he worked up the resources to employ the technology and shoot it towards an inaccessible cliff from the Himalayan Mountains.

This is when he, alongside his team, uncovered what appeared to be a rather mysterious architecture inside of the cave. That’s right, all signs point towards this actually being an entrance into a wall which is made specifically for the sake of housing a massive alien base right into the mountain.

Many believe that this isn’t the case however and that this is actually a secret military base all along. Regardless, it’s not like we can just go to the site ourselves as it is, as mentioned previously, inaccessible for most anyone on this planet unless you’re ready to throw all of your life savings into it.