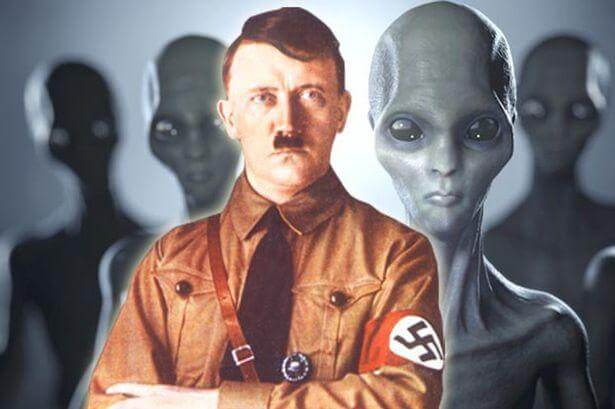 THE Nazis spawned from a mysterious occult society – which may have been in touch with ALIENS.

The secret society gave the Nazis the swastika symbol, its delusions about the so-called “Aryan master race” – and its hatred of Jewish people.

It prophesied a “German Messiah” was coming to redeem the country after its humiliation in World War One.

But conspiracy theorists claim the group’s inner circle was also looking for mythical alien super beings – and the fabled energy source they controlled.

The Thule Society sponsored the founding of the Nazi Party and many of its members went on to become prominent Nazis – including deputy Führer Rudolf Hess.

It was named after “Ultima Thule” – a country in northern Europe found in ancient Greek and Roman mythology.

The “German study group” believed the lost ancient landmass – somewhere in the Atlantic near Greenland or Iceland – was the original home of the “Aryan race”.

The Thule Society was interested in so-called “racial theory” and – in particular – in combating Jews and Communists.

New followers had to swear no “Jewish or coloured blood” flowed in their veins.

But the group allegedly had a much, much stranger set of beliefs.

This subterranean society – called the Vril-ya – was said to have developed futuristic technology far beyond the reach of humans, including a liquid energy source known as “Vril”.

But it also had awesome destructive power – such that a couple of Vril-ya could easily wipe out an entire city.

Writers have claimed Nazi mystics were looking for the Vril-ya – and some conspiracy theorists believe they found them.

The idea of Vril came from a 19th century book called The Coming Race.

The book was very popular and the idea of Vril became well-known and filtered into everyday language as a word to refer to any revatilising liquid.

In fact, the brand name of meat extract Bovril is a blend of “bovine” (cow) and “Vril” – as its makers wanted to suggest it was a power elixir.

The Coming Race was mean to be fiction – but some people started to believe Vril and the subterranean master race who controlled it were real.

The Theosophists – a group of New Age mystics linked to Mahatma Gandhi – were among those who believed in the power of Vril.

In the early 20th century, Germany was buzzing with the occult, mysticism and pseudoscience.

Willy Ley, a German rocket engineer who fled to the US just before the start of World War 2, revealed there was a secret society in Berlin looking for a mythical energy source called “Vril”.

Ley – who went on to become a famous science writer and even has a crater on the Moon named after him – said: “The group – which I think called itself ‘The Society for Truth’ and which was more or less localised in Berlin – devoted its spare time looking for Vril.”

British historian Nicholas Goodrick-Clarke, who was professor of Western Esotericism at University of Exeter, also reports of a Berlin-based group that was studying uses of Vril in the 1930s.

In their 1960 book The Morning of the Magicians, French writers Louis Pauwels and Jacques Bergier claimed a group called the Vril Society was operating in pre-Nazi Berlin – and its members were the inner circle of the Thule Society.

This is easy to believe as the Thule Society and senior Nazis were obsessed with the occult.

Heinrich Himmler — head of the Gestapo during the Holocaust — was obsessed with the supernatural and believed magic held the key to “Aryan” supremacy in the world.

Hitler seized the so-called “Spear of Destiny” – a relic believed to be the lance used to pierce Jesus Christ’s side when he was on the Cross – from Vienna when Germany annexed Austria in 1938.

The Führer is also said to have sent out search parties to find the Holy Grail – believing it could help the Nazis achieve world domination.

Hitler’s mentor, Dietrich Eckart, is thought to have been a Thule Society member or at least linked to the group.

Historian Hannah Newman claims Eckart followed the ideas of Helena Blavatsky – one of the founders of Theosophy.

Newman says Eckart introduced Hitler to Blavatsky’s book The Secret Doctrine of Theosophy – in which Blavatsky claims Vril is based on a real magical force.

Some have suggested Hitler’s powerful personal magnetism was down to black magic – or communion with the Vril-ya.

Winston Churchill said: “[Hitler] had conjured up the fearful idol of an all-devouring [pagan god] Moloch – of which he was the priest and incarnation.”

Eckart – who was convinced Hitler was the prophesied “Great One” – wrote: “Follow Hitler.

“He will dance, but it is I who have called the tune.

“We have given him the ‘means of communication’ with ‘Them’.”

Nazi Germany was developing a mysterious range of futuristic aircraft towards the end of World War 2 – some of which looked suspiciously like UFOs.

UFO hunters have suggested these Nazi flying saucers were fuelled by Vril or other extra-terrestrial technology.

Former SS officer Wilhelm Landig – who founded the so-called “Vienna Group” of occultists after the war – claims Nazi scientists have continued to work on the Nazi UFOs at secret underground bases under the polar ice caps.

Conspiracy theorists suggested the Nazis may have uncovered the Vril-ya’s subterranean home detailed in The Coming Race.

Another group from Vienna – the Tempelhofgesellschaft – claims information from “ancient Sumerian manuscripts” suggests the Aryan race are really aliens from Aldebaran – the brightest star in the zodiac constellation of Taurus.

The group believes an enormous space fleet of alien Aryans – who derive their power from Vril energy – is on its way to Earth from Aldebaran.

It will join forces with the Nazi UFOs hidden at the Antarctic to take over the Earth.

Interestingly, this matches the end of The Coming Race, which warns the Vril-ya will run out of space underground and eventually reveal themselves – before destroying the human race.