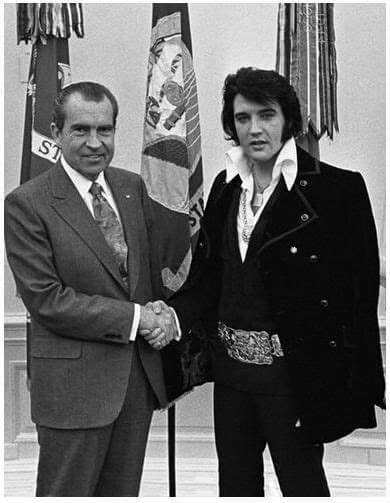 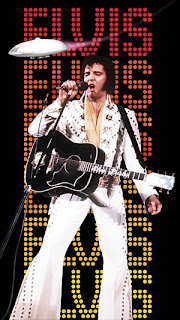 (Aug. 16) – Elvis may be the undisputed King of rock ‘n’ roll, but did you know he was also supposedly the King of UFO sightings?

Turns out, the hip-swiveling pioneer of rock may have been the first official rock star to truly embrace UFOs due to his reportedly deep-rooted, lifelong connection to flying saucers.

Now, there’s no need to get “All Shook Up.” Elvis’ so-called “alien connection” is all solely the notion of Michael C. Luckman, a New York-based UFO researcher and author of “Alien Rock: The Rock ‘N’ Roll Extraterrestrial Connection” (Simon & Schuster), a book about famous musicians who claim they’ve had alien encounters.

Luckman told AOL News that out of all pop culture rock icons, Elvis Presley, by far, had the strongest tie to UFOs, experiencing several documented sightings throughout his life.

The author claimed that it all began the night the King was born — Jan. 8, 1935 — when a strange, unidentified blue light reportedly hovered in the night skies above Elvis’ childhood home in Tupelo, Miss.

“The light was seen by the doctor who delivered him and by Elvis’ father, who later told Elvis all about it,” alleged Luckman.

Shed Show TALK
Elvis encountered aliens, space beings, ufo’s and a blue light at the time of his birth. Did these phenomena’s empower Elvis or did they follow Elvis? Elvis is not the only celebrity entertainer to encounter this mysterious blue light in his life. Check out this video with Bret Michaels of 80’s band Poison: https://www.youtube.com/watch?v=MTc9T…
Great Video I found tonight while doing my nightly research time surfing the Internet then quietly head to my back porch to sky watch for 20 to 30 minutes to give my eyes a break from the computer screen and TV. Then head back to start the cycle over.