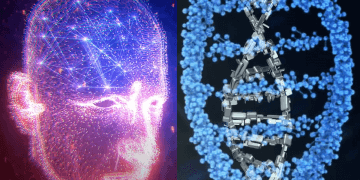 If extraterrestrials visited Earth in the distant past, what kind of evidence might they leave behind? For Paul Davies, an Astrobiologist from Arizona State University, the traces of ancient alien (or their robot) visits might be found in one of three places:

Now the third option isn’t literal but could be any number of things. For example, Davies suggests that the message “could be living cells.”

“One idea I had is that maybe the “bottle” [is] living cells -terrestrial organisms, and that message is encoded in DNA. Viruses are continually infecting organisms and uploading their DNA into the genomes of those organisms,” notes Davies.

Davies noted that viruses could encode DNA, so why not extraterrestrials? Indeed, it’s one of the hallmarks of today’s ancient astronaut theory.

“If viruses can do it, E.T. can do it. And it seems to me that we could; in addition to scouring the skies for radio waves with a message encoded; we could scour terrestrial genomes, which are being sequenced anyway, to see if there’s a message from E.T. encoded.”

At the time, Davies knew that finding a message from extraterrestrials in our DNA was a stretch. However, not long after, two scientists from Kazakhstan reported they might have discovered just that: an “intelligent “signal within the human genetic code.”

The mathematician and astrobiologist titled their paper “The ‘Wow! signal’ of the terrestrial genetic code.” The Acknowledgments give the nod to Davie’s ideas. The “Wow” refers to the now-famous 1977 SETI signal that prompted a researcher to write, “Wow!” next to it.

The researchers didn’t use the phrase “intelligent design,” but suggested they found code that seemed to be “seeded intentionally.” That information, they argued, appeared to be non-biological and mathematical and symbolic.

They speculated the ancient code came from another solar system, possibly intentionally seeded by panspermia. Could it be the “message in a bottle” that Davies suggested before them?

“Whatever the actual reason behind the decimal system in the code, it appears that it was invented outside the solar system already several billions years [sic] ago,” they wrote.

You can see more about this study in the video clip from the History Channel’s Ancient Aliens series below. Prepare to entertain the idea the humans are nothing more than artificially created “organic robots” with artificial intelligence. (A.I.)

The scientists from Kazakhstan don’t claim to know how an ancient code was seeded in our genes. Rather, they suggest the DNA code could have arrived on Earth through panspermia, space dust that drifted from outer space.

In at least one case, there was some evidence of interbreeding between an extraterrestrial and human. A man named Peter Khoury claimed that two humanoid females entered his room. One of the humanoids had long blond hair, large eyes, and a long chiseled face. The other appeared to be Asian in appearance.

Following a bizarre sexual encounter with the blond woman, he found and kept a piece of her hair she left behind.

Later the DNA from the optically clear hair was tested, revealing rare DNA markers. Instead of being typical of a light-skinned Caucasian woman, they were characteristic of rare Chinese and old Gaelic lineage.

See Khoury discuss the story in the video from the History Channel below:

Rewriting the Code of Life

Are extraterrestrials actively designing humans’ DNA in some way even today? Well, now, humans are doing it themselves. The 2020 Nobel Prize in Chemistry was awarded to Emmanuelle Charpentier and Jennifer A. Doudna for their 2012 work in precisely editing DNA.

As they were introduced for the prize, the secretary-general of the Royal Swedish Academy of Sciences, Goran K. Hansson, said:

“This year’s prize is about rewriting the code of life.”

The two women stumbled across the revolutionary technique called Crispr while studying the bacteria that causes scarlet fever. When inspecting the microbe’s DNA, they found repeating segments. These segments were made up of regularly interspaced short palindromic repeats: Crispr for short.

The segments were derived from a virus that had attempted to infect the bacteria.

Thanks to their research, repeating code from a virus has revealed how to change our DNA effectively. As Paul Davies said, “If viruses can do it, E.T. can do it.” Now, we are doing it too, and rapidly transforming science, the world, and probably ourselves.

Is it possible this discovery was inevitable, something artificially ingrained in our being all along? Are we artificial